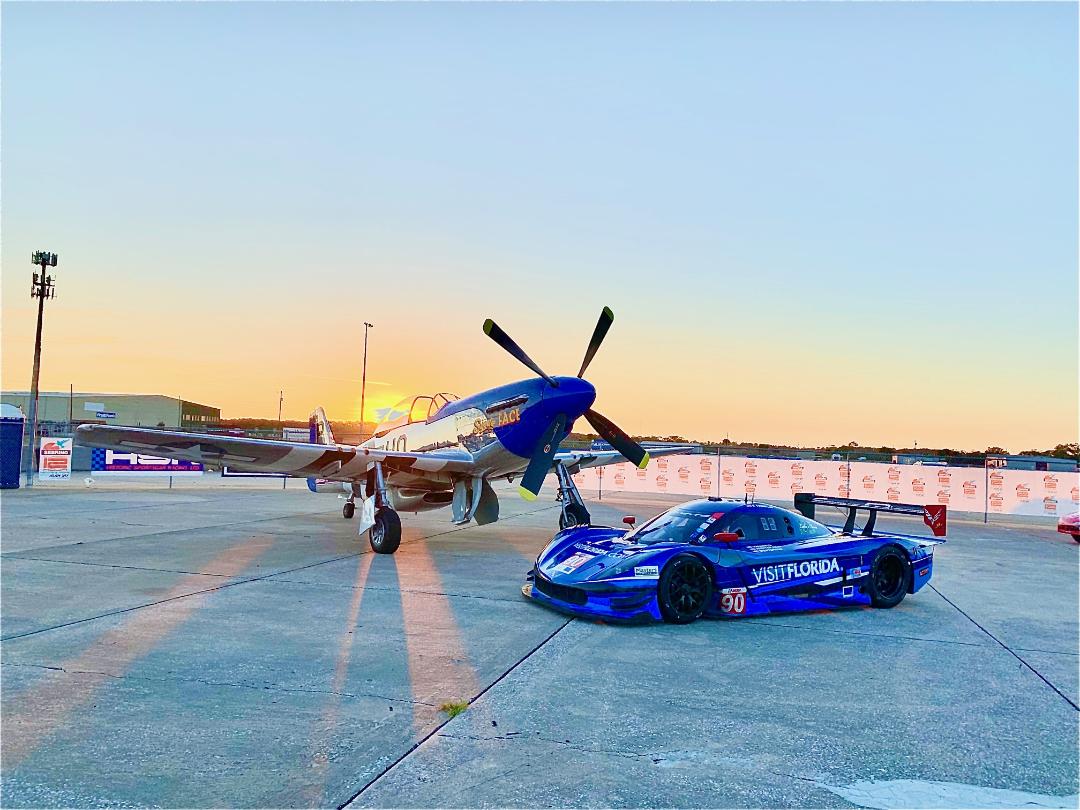 We always look forward to December. It’s when the Alan Jay Classic 12 comes to the Sebring International Raceway. Those who follow us know we like airplanes and Sebring also is one of our favorite sports car race courses. And we’re not alone. The 12 Hours of Sebring recently topped the 10best list as the Number One Motorsports event in the world.

But the thing we like about the Alan Jay Classic 12 is that it’s a dual celebration. Historic Sports Car Racing brings dozens of vintage race cars to the track in a salute to America’s Oldest Sportscar Endurance Race the 12 Hours of Sebring. In addition, we get to see historic aircraft in honor of Hendricks Field. That former WWII training facility became what is now the Sebring Regional Airport.

It was from the runways and roads on the base that the course, which now is the Sebring International Raceway was carved.

That’s why they call it “Pistons & Props.”

Last year, nearly a dozen planes made their way down the back stretch at Sebring. They then parked at the end of the paddock for all to see. One of our favorites – Jim Lyons’ P-51 Mustang known as “Sweetie Face” – led the way. But there were all manner of aircraft – including a bi-plane and a T-3 trainer.

The airplanes will be parked in the paddock in a static display But members of Historic Sportscar Racing actually will be competing on the track. This is the last race of the season for the group. We expect some hot action – as there will be some championships on the line.

Those will include the season-ending rounds of the WeatherTech Sprint, Sasco Sports International/American Challenge and B.R.M. Enduro Challenge series. Dozens of cars from standards like Porsche, Corvette, BMW and Ferrari will be joined by exotics such as Elan, Lotus and even a Diasio on the track.

New this year will be the triumphant return of the No. 7 Peugeot 908 HDi FAP of David Porter. It scored the overall 12 Hours of Sebring victory in 2011 in its prime.

This will be the first time back for the car, which is one of the last 908 HDi race cars built. The 2011 Sebring victory with Team Oreca Matmut was the third and final win for the Peugeot. We understand it will run in its original 2010 Peugeot factory livery.

And for those who have seen the movie – yes, both Ford and Ferrari will be there.

The Alan Jay Classic 12 is a great four day race weekend. It has something for everyone. There will be two dozen different races in a myriad of classes. An enduro that goes past sunset is planned. A night practice is on the schedule and wall to wall sessions for testing, qualifying and full completions are on the docket.

Plus fans will have their run of the place. We like to travel around – sit for a while on the viewing mounds, drive over to the paddock and see the cars, stand for a bit in the pit structure and watch the front straightaway – then maybe head over to Seven, The Sebring Raceway Hotel for a bite and to view the Hairpin.

This is a great event for sports car enthusiasts, aircraft aficionados or people just looking for some excitement and a really good time. Tickets and more are available at the Sebring International Raceway.