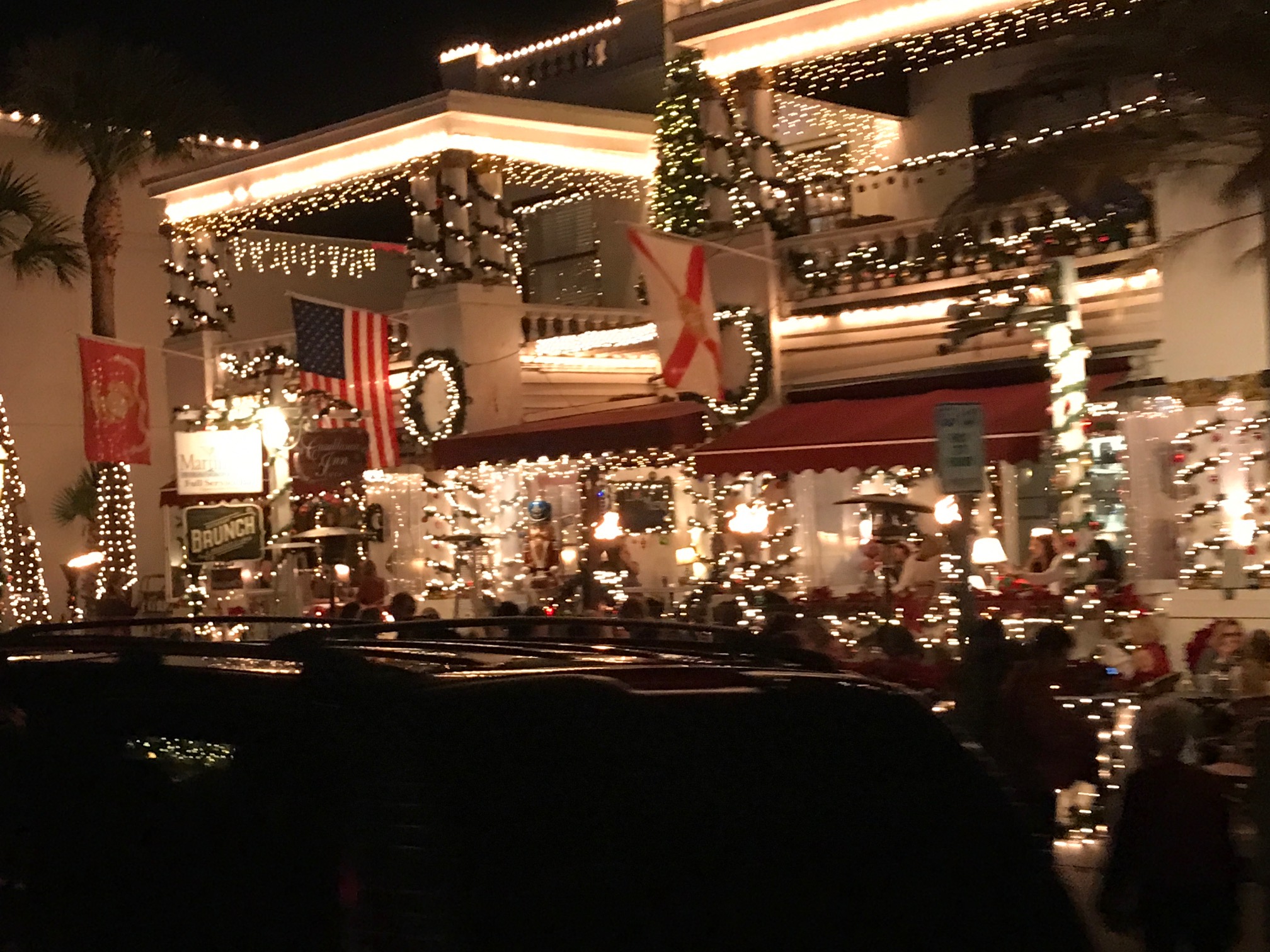 Facebook
Twitter
Google+
Pinterest
WhatsApp
After seeing many posts about the Christmas St. Augustine – called “Nights of Lights,” we were lured to the Nation’s Oldest City for a Christmas vacation. While it was fun on many levels, we did learn some valuable lessons.
It had been better than a half century since last I visited St. Augustine. The first time I was a small child and had few real memories of the place. However, I saw the photos of the monochromatic holiday lights of the old town. the horse-drawn carriages on the quiet streets and was sold on the idea.

Who couldn’t revel in the notion of walks on the beach during the day, a handsome cab in the evening with an ending at a wine bar or quaint Irish pub?
Apparently, there were about 100,000 other tourists from all over the world who had the same idea.
An Early Arrival
We actually started two days before Christmas and stayed in nearby Palm Coast. That was about a 25-minute trip and figured to be about a third the price of the room in St Augustine we had booked for Christmas Eve and Christmas Day.
This was a wonderful part of the vacation. We drove into St Augustine and experienced a lot of great attractions. It is an early example of staying offsite. 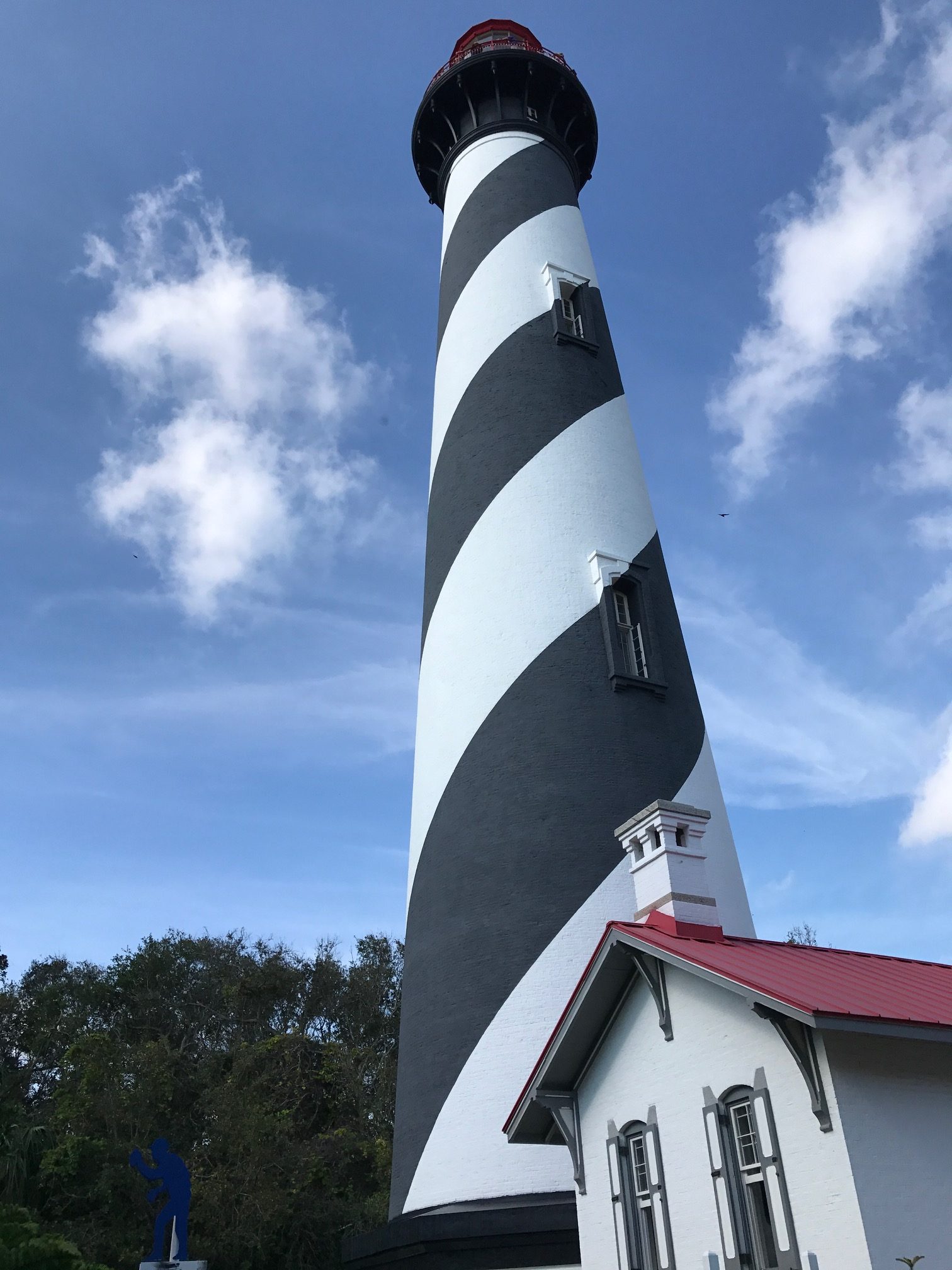 The St. Augustine lighthouse and museum was a great stop. We climbed to the top, browsed through the lighthouse keeper’s museum and had a wonderful time. There was no admission charge and parking was quick and easy. We dined at The Gypsy Cab Company – a great little restaurant with wonderful food at reasonable prices.
St. Augustine also has a great farmer’s market. Smaller than many, it is limited to local artisan products and is rich with great food, arts, crafts, and many, many organics. There also is a pick-up bluegrass band that plays in front of the amphitheater for the duration of the morning market.
We also took the opportunity to check out our room in St Augustine and to drive around a bit to get the lay of the land.  Additionally we reviewed a computer printout as to what restaurants would be open and what churches would be having services for Christmas.
Packing up and heading out early, our plan had been to first stop and enjoy the early morning service at the only church that had a service at 8:30. We were disappointed, as were others, that the early service was cancelled on Christmas Eve morning.
Undaunted, we reset our schedule for the Christmas Eve service and headed out for breakfast. We found ourselves at the Hotel Casablanca and Restaurant Brunch where we had a sumptuous breakfast. Great cooking, ample portions and somewhat of a view of the Bridge of Lions and even some traffic on the Intracoastal Waterway through an early-morning fog.
We then headed over to Flagler College where we got a tour of the building which originally was built as the Ponce DeLeon Hotel. Our guide was a sophomore business administration student named Rose. Armed with information, humor and a great public speaking ability she took the tour group from the courtyard and through the building, giving us a great look at the vision of builder Henry Flagler and efforts of the school to preserve the legacy he left. 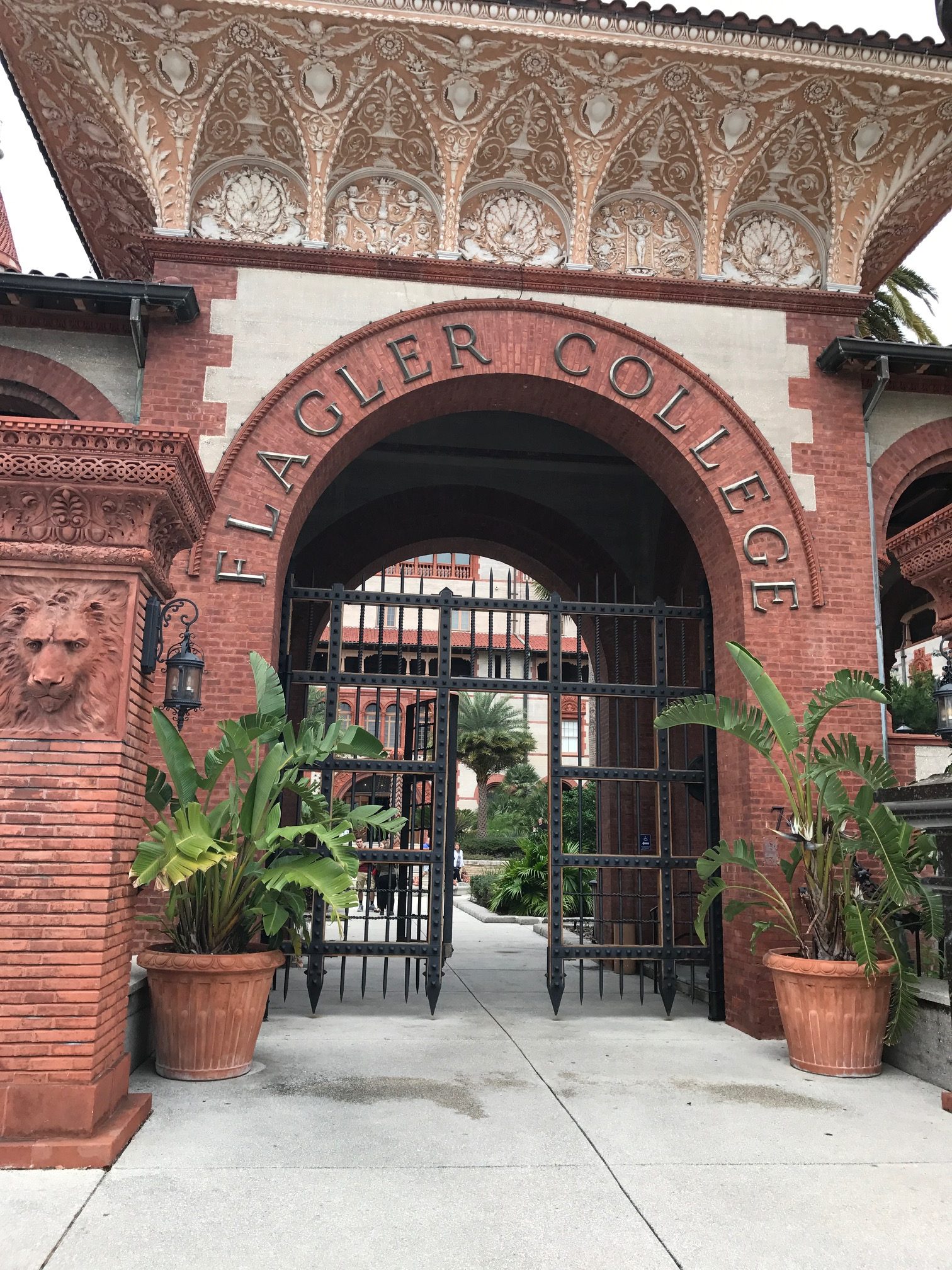 As the day wore on, we increasingly realized there is virtually no place to park in St. Augustine at a reasonable price. After checking into our hotel room, we vowed to simply gut it up and take a trolley through town. This service allows riders to get off at certain spots wander around that area, then get on a subsequent train and ride to another stop. This is done for a single price for the day.

Unfortunately, on Christmas Eve, they stopped running at 3:00, which would have given us about 90 minutes. We bought tickets for their tour of the Nights of Lights but still had no good method for getting downtown for a Christmas Eve Day tour of the old town section.
We finally decided to walk.
It was quite a haul from our hotel down the to the Castillo de San Marcos. But we did run up on some pretty fun places, not the least of which was “Cool and Collected,” a retro antique and curio shop which was almost a living museum where all the displays are for sale. The place conjures up tons of memories for anybody who grew up in the 50s – 80s.
Plus my wife found a very fine tweed coat at a bargain price.
At 315 years old, the Castillo de San Marcos is the oldest structure in St. Augustine and a national monument. We took a self-guided tour of the place, which had exhibits, docents and even a movie that showed the progression from Spanish, to British to American rule. It was capped by a demonstration of the firing of a cannon, which was both loud and fun.
We then headed back to the motel and decided to try someplace for dinner. The local tourist board had put out a listing of some of the restaurants which were supposed to be open Christmas Eve. Some of them were and we settled on a downtown Greek restaurant – which turned out to be one of the biggest and most expensive mistakes of our traveling life.
After dinner we grabbed a shuttle to to Nights of Lights tram tour. There was quite a long line, but it moved through fairly quickly as tram after tram pulled up and loaded carloads of those wanting to see the display. We were fortunate to get a front row seat – right behind the driver.
Unlike the brochures, there were tens of thousands of people cramming the streets and sidewalks. The buildings were decked out beautifully but unlike the vision of a quaint carriage ride, we were serenaded with back to back Christmas songs, aided by the driver who periodically cajoled the riders to holler “Merry Christmas” at passers by.
The tour was a lengthy one, as he wound through a maze of major thoroughfares and tight one way streets in the old town section.
On our way back to the motel room we did make one romantic stop. A small play park which featured a lighted carousel at the corner. At a dollar a whack it was great for Mrs. Funmeister and myself to take a few spins. She was beautiful under the lights and I managed not to fall off my steed.
Christmas morning we slept in, and finally pulled ourselves out of bed. Although the hotel offered a nice little breakfast, we opted to try our luck at the Village Inn. We had hoped it would be better than home – but it is, after all,  a Village Inn.
Taking a Christmas morning auto tour of St Augustine, we happened upon a Christmas Morning Worship Service at an Episcopal Church. What a wonderful experience. We truly felt as though we had been led there by the Holy Spirit.
Following the service, we again cruised the streets, finally finding a parking space where we could walk the old town district to see what they would have to offer the next day when business resumes.  It is a great walking mall with a wide array of restaurants, tourist shops, dry good stores and other places to find interesting pieces. 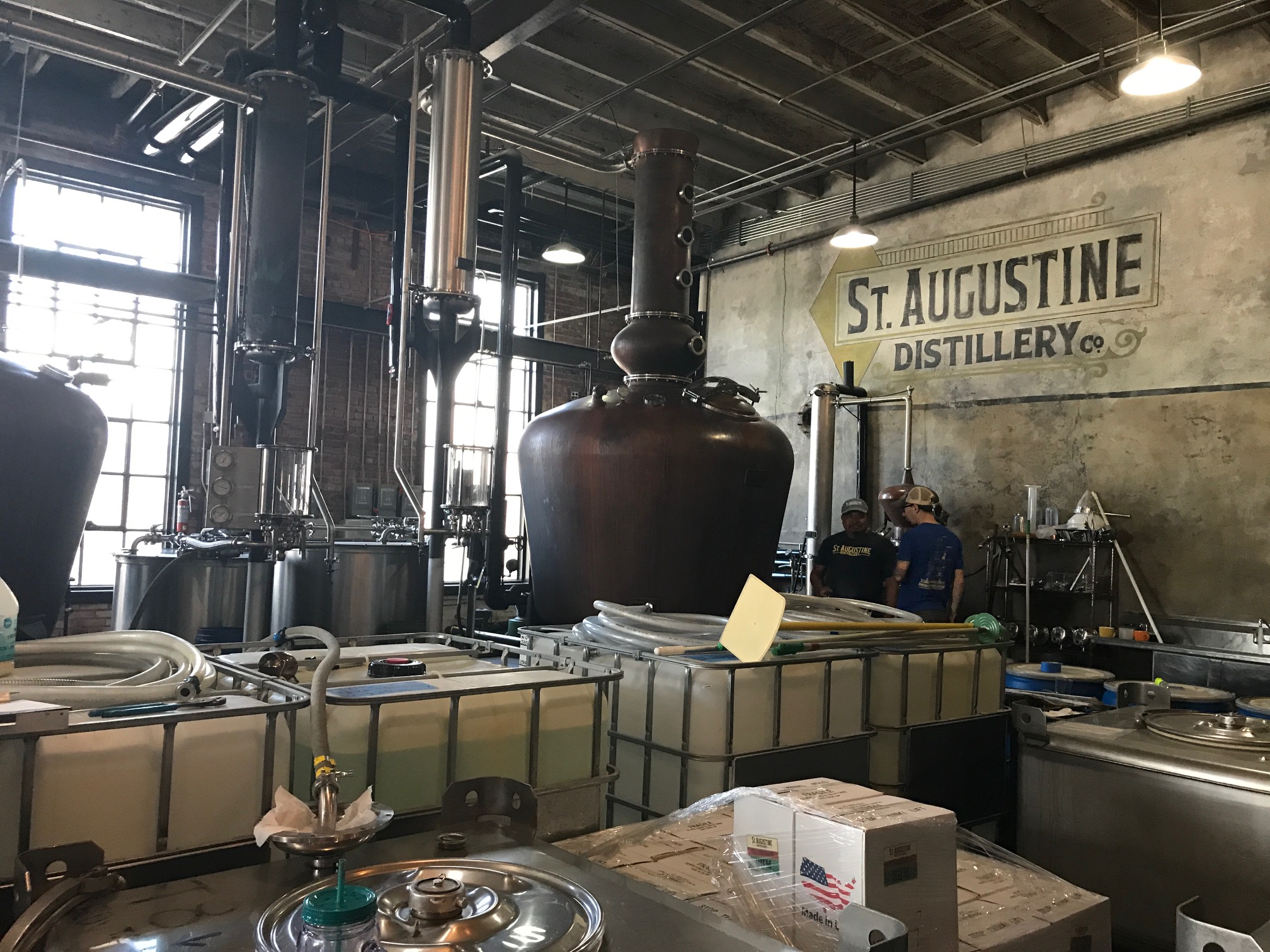 Before we left, we did have an opportunity to stop at the St Augustine Distillery, which proved to be one of the highlights of the trip. Established in an historic ice house, this award-winning facility is run by a group of people with a great sense of humor and even a greater product. Their tour is free and liberally sprinkled with free samples of their product. It is absolutely a must-stop.

In all, St. Augustiine is a wonderful place to visit, however, it will require a bit more research and information to be able to go and enjoy ourselves. One thing we would recommend – is to wait until the off season, when prices drop and the crowds subside.