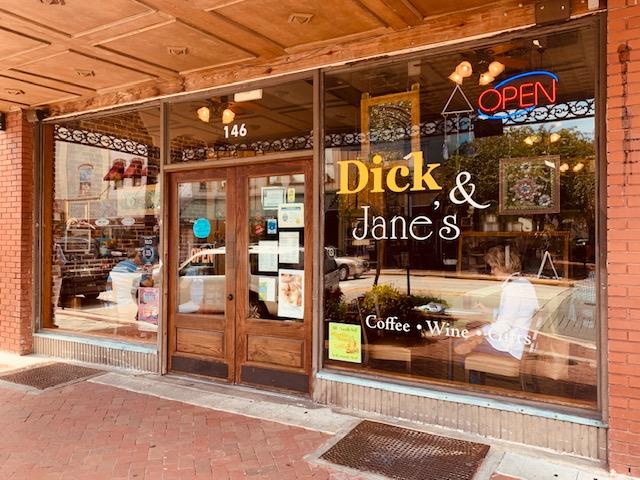 Each time we visit DeLand we find some new and really fun places. This time it was a cool little restaurant called Dick & Jane’s. Like many of the fun and funky places The Lord sets across our path, this is more than an eatery, it’s also an artsy curio shop with a great selection of wines.

We actually found this little gem while walking along Woodland Boulevard enjoying the nearby shops. When we opened the door of the restaurant, we were impressed at the amount of art. There were drawings, paintings and wall hangings. Also, there were numerous shelves full of goods and even jewelry in display cases.

It’s a local favorite for lunch and it’s easy to see why. The menu boasts a wide variety of sandwiches, wraps, paninis and croissants. There’s also a brace of salads – including the very intriguing “Celebrity Salad.” Turns out, it’s a bunch of fruits and nuts.

I opted for one of their Signature Sandwiches. The Dagwood (named for Dagwood Bumstead), consisted of roasted top round, fresh roasted turkey, pastrami, sliced pit ham, Swiss, and provolone, lettuce, tomato, mustard and a homemade special sauce. I had mine on black Russian bread.

Mrs. Funmeister decided to try the Plain Jane. That’s their version of a grilled cheese. But plain it’s not. This is made with mozzarella, Provolone, cheddar and jack. It’s normally served on a grilled, flaky croissant, but instead she had it on rye.

But Dick & Jane’s is not only for lunch. We found that the restaurant has a great breakfast following. They serve up fresh baked goods such as scones, muffins and various pastries and also are famous for their fine coffees and lattes.

Generally, there are plenty of baked goodies available – even after the breakfast rush. It appears that they make enough so that even when you’re ready to leave after lunch there’s a nice selection in the case at the checkout counter.

Dick & Jane’s came into being when Scott and Maria Price took over Stacy Jane’s. That was a small gift shop behind their location. They moved the shop up front and turned it into Dick & Jane’s.

The restaurant actually started out as a coffee shop. But as time went along, they built a full service menu.

We recommend you budget some time when visiting Dick & Jane’s, both for a leisurely lunch and some gift shop browsing.