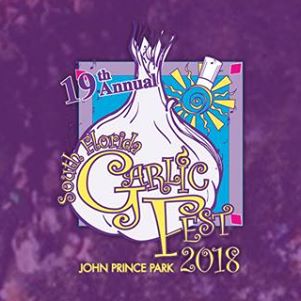 If you like garlic, the annual South Florida Garlic Festival is the place for you. As food-oriented festivals go it was as inventive as any and better than most.   We took a Saturday out of the 3-day festival to see the sights and enjoy the cuisine.

By far the most impressive feature was the NBG – or, Nothing But Garlic food court. They had no fewer than 28 different dishes prepared on-site with as many different incarnations of garlic offered to a hungry crowd. 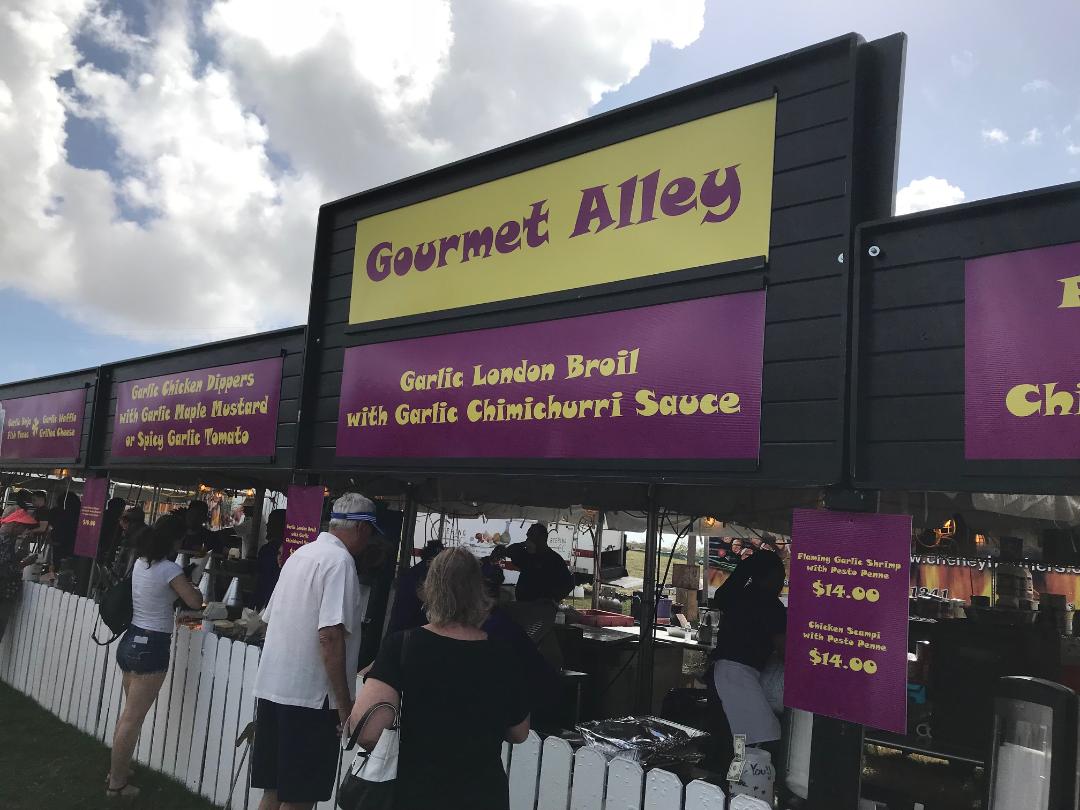 There was Lots & LOTS of Garlic

There were the traditional offerings such as roasted garlic, garlic bread, garlic chicken and the like. But then there were other options ranging from garlic conc fritters, to garlic BBQ pulled pork, garlic waffles, garlic baja fish tacos even garlic ice cream.  It appeared that each of the vendors had spent no small amount of time putting as much garlic in their respective dishes as they thought they could get away with. The booths were gathered in a long, cafeteria-style line with each of their offerings prominently displayed on an elevated, festival-themed yellow-on-purple sign.
I ordered the garlic spinach & artichoke stuffed portabello mushroom cap, while my wife had the garlic chicken dippers with garlic-infused maple mustard sauce. Both were very tasty, very garlicy and were extremely generous portions. The only downside was that her sauce leaked out of the paper holder and she had to go back and get more.  Finding drinks to suit our taste also was a bit of a challenge. The official soft drink vendor for the garlic festival offered neither ginger ale nor root beer. My wife finally cajoled one of the bartenders at a “liquor bar” to make her a mixed drink, sans alcohol. 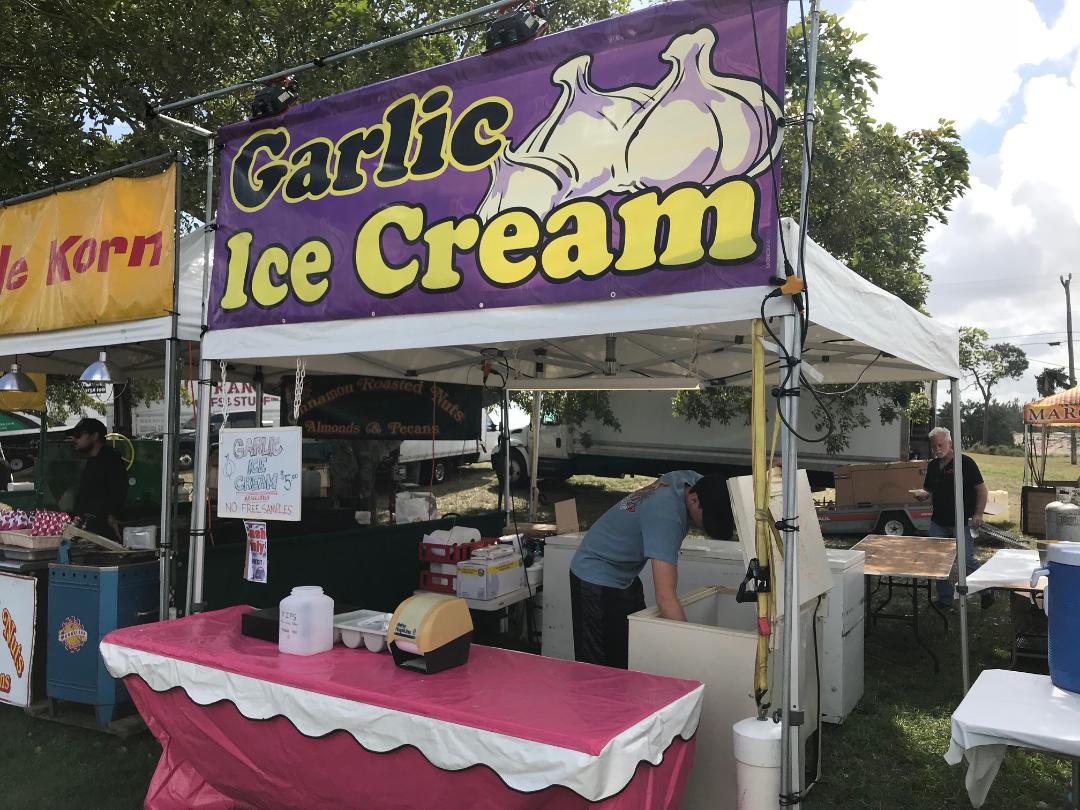 The cranberry/ginger ale spritz was not too sweet  and paired very well with the garlic.  For dessert I had the garlic ice cream. Although it was a bit lame in terms of garlic content – how could you not? I thought the vendors were inventive and used the opportunity to capitalize on the day with something unique and fun.

In Garlic Stadium, Chef on Chef competitions were the order of the day.  In between, they featured demonstrations on garlic pairings and other information. Outside the tent there were photo op cardboard cut-outs where guests could appear to be dressed as the King of Garlic – without putting on the costume.

This was a celebration festival and not a harvest festival – so there was not much actual fresh garlic for sale. The Pennsylvania-based Conover Farms was there with some great organic black garlic and a few other varietals, but that was about it. 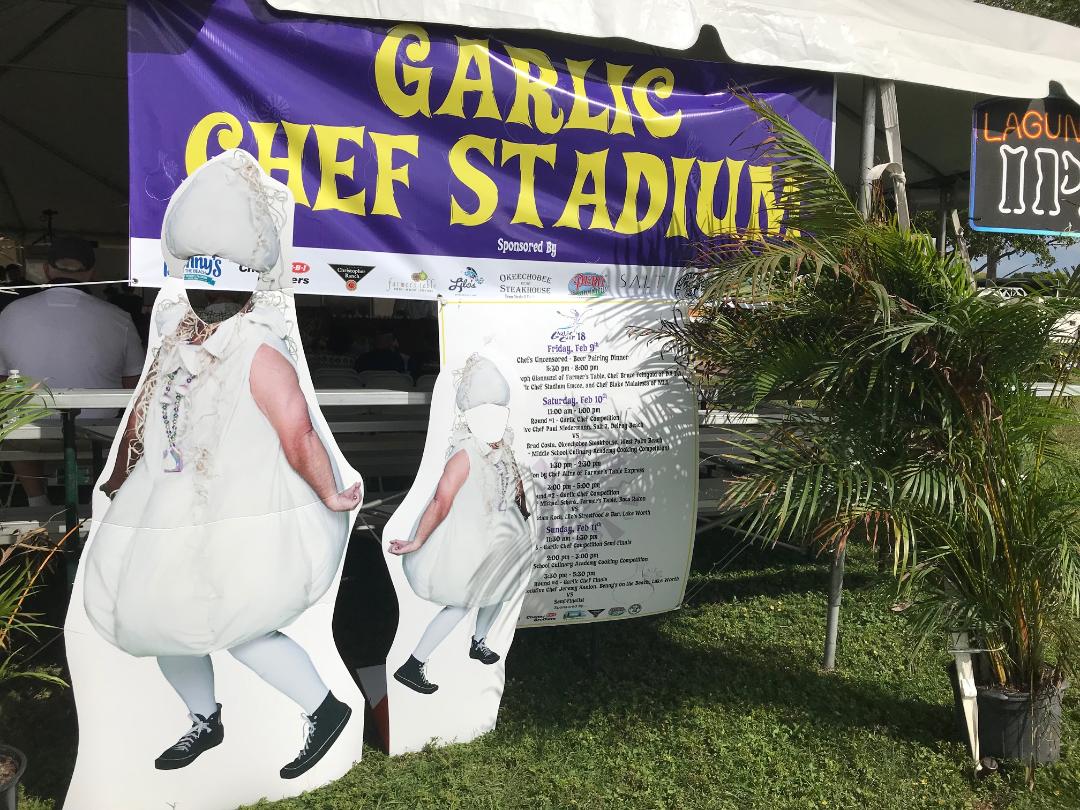 There were a few spice booths with some dried garlic products, some garlic barbecue sauces and an exhibit of garlic preservation equipment and one with preparation tools.

This was our first time at the South Florida Garlic Festival. As we understand it, the event had outgrown its original grounds in Delray Beach and moved up to John Prince Park in Lake Worth.

It appears the festival now is positioning itself for significant growth.

Organizers seems to be looking to big name entertainment to help build the crowd – some award winning recording artists were booked for evening shows on the main stage such as Hoobastank and Stephen Marley.
There also were some carnival-style rides for both youngsters and adult thrill seekers in what appeared to be an effort to draw more families to the festival. 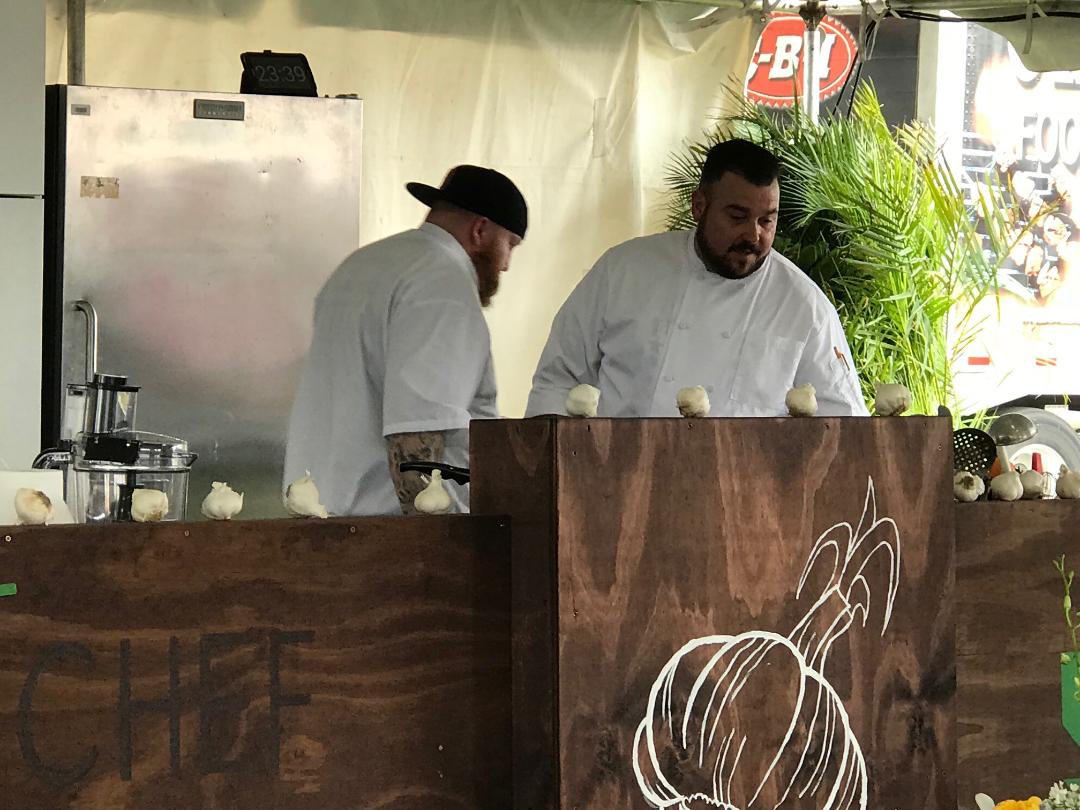 But as foodies, we had hoped for more on the garlic side. As we watched the chef competition, it was hard to figure out what they were doing and what they were making. We had hoped there might be more of their recipes available for the general public. The health benefits of garlic are legion and we were looking to find out more on that aspect as well. We did have a nice conversation with the folks from Conover Farms, who apparently made the trip all the way from Pittsburgh, Pa. to participate at this year’s festival and were quite well versed on that subject.

As with most such festivals, there were plenty of booths, offering  clothing and jewelry to storm windows, even tattoos, golf carts and recreational vehicles.  My single biggest disappointment was not being able to find an event shirt that had the actual event logo on it – those seemed to be reserved for staff and volunteers. Those offered to the public had cute slogans like “EAT-DRINK-REEK” and “I SURVIVED THE GARLIC FESTIVAL” but not a shirt that actually reflected the event per se.

However, the 20th annual event is coming up next year and we’ll see what the committee has to offer. Our only suggestion is – if they are looking for star power – there is only one queen in the garlic world. That would be the prime promoter of garlic in the kitchen – Rachel Ray.
If she is not the Grand Marshal of next year’s event, our only question would be….what could they be thinking?
Please follow and like us: