Home Our Travels Our Thanksgiving Holiday 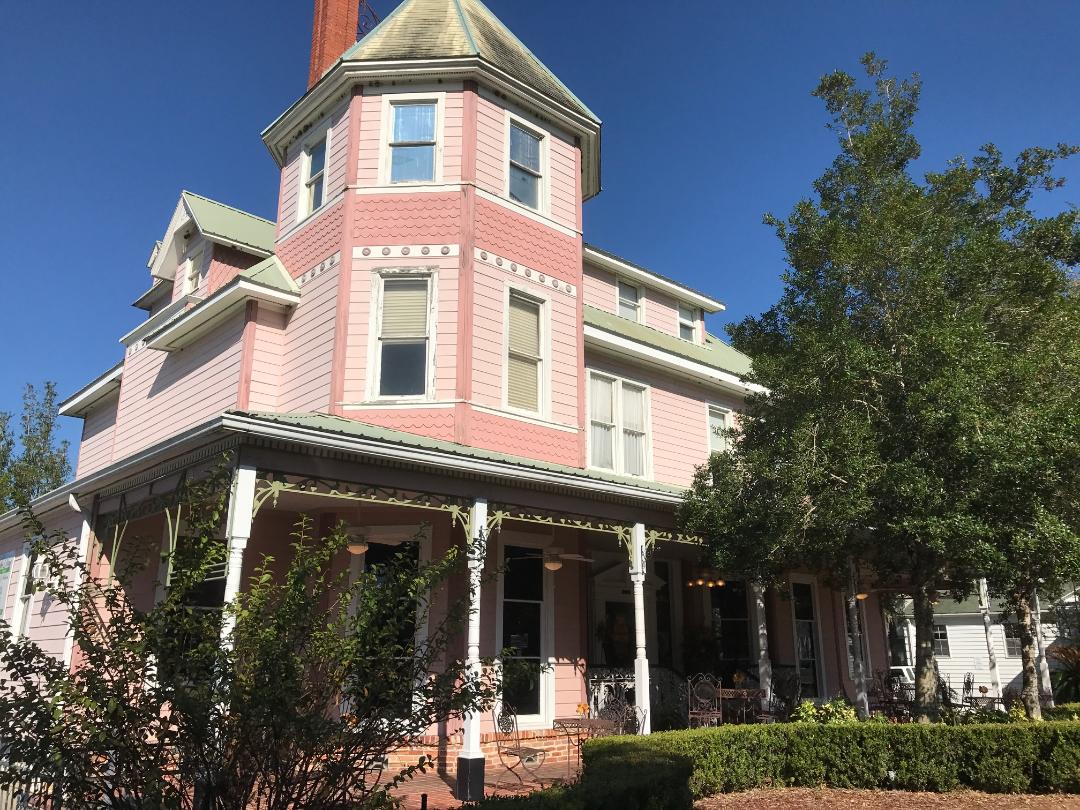 Facebook
Twitter
Google+
Pinterest
WhatsApp
Well it’s Thanksgiving week and Mrs. Funmeister and myself are off for our annual trip to enjoy Florida and the surrounding environs. Today was our first day out and to say it has been eventful is an understatement.
We began by taking the backroads to Ocala.  Although there were a myriad of opportunities for fun stops along the way, our primary goal on Day One was to have lunch at the fabled Ivy House. Carved out of an old Victorian mansion, it is one of the actual wooden structures in “The Brick Cit

y.”
It is a stunning piece of architecture, highlighted by a distinctive paint job on the outside with a skillful use of antiques inside. Apparently, it is a favorite with the ladies. The lunch crowd was 85-percent women with a smattering of husbands brought along for the ride.
There are both inside and outside seating options. Because it is November, we chose to dine inside.
At lunchtime, a wide variety of choices are available from salads to the angus beef hamburger. We began with an appetiser of onion rings and dip. Great selection. The rings were thin, not overbreaded or greasy and sprinkled with herbs. The dipping sauce was a wonderful and not-too-spicy mixture.
For our entrees – I had the Gourmet Turkey Crossoint, while Mrs. Funmeister had the Fried Green Tomatoes BLT. Both came with a crisp green salad. I had the ranch dressing while she opted for raspberry vinagarette.

Both were spectacular as were the sandwiches. The turkey crossoint features a special cranberry sauce with a dill mayonaise. The Fried Green Tomatoes BLT has the special aioli sauce and is served on a sourdough bread. Both are highly recommended.

Incidentally, mine ended with a dollop of “Polynesian fruit” which was particularly tasty,

All this at prices that are extremely competitive with factory chain restaurants in the area.
Dinner came in the form of a Mediterranean-style restaurant in Marianna, Florida called the Mashawy Grill. We had never experienced this kind of cuisine in the past so it was a true learning experience for the both of us.
Although “mashawy” in Turkish apparently means “barbecue,” this was anything but a barbecue joint. Placed in a former country club restaurant, it was an elegant setting highlighted by rich decor and piano music. We started out sharing a sampler plate of falafel, sambousa and stuffed grape leaves. I enjoyed all of them, but vegetarian wife was most impressed with the falafel – which included diced tomato, pickled turnip and parsley. There also was a tart white tahnini sauce and a red sauce that I cannot prounounce but was quite like a salsa.

For dinner, I had the Kafta Kabobs with meat while she went with Moshakel – a dish featuring layers of potato, onion, green bean, squash and cauliflower in a tomato sauce – it was the texture of southern cooked vegetables (quite soft). They both  had hummus and pita and white rice.. I have had many kabobs in my life, these were the first that came in a single roll, without a skewer. They were quite flavorful and although they were full of spice they were not hot.
Her dish was quite good, the cool crisp salad was a nice contrast to the soft warm vegetables.
She also got a special hot tea called Mashawy Tea. A blend of cinnamon, ginger, clove and cardamon – it had no actual tea, or caffine. It was …. interesting. the menu offered an interesting selection of desserts but with Thanksgiving less than a week away we did not indulge.  Ending the meal on a sweet note the owner served us a special sweet tea.
In point of fact, the entire dinner was a new experience. I would recommend it to anybody who is looking for something completely different.

We stayed at the Comfort Inn & Suites in Mariana. We booked the room online and were a bit apprehensive as it was a more budget flag in a small town. When we got there and inspected the room we were pleased. It actually turned out to be a suite with a couch (more than we need).

All the amenities were there including flat screen TV, fridge, microwave, iron/board and blow dryer. Bed (a king) actually was one of the better we have experienced.   Our complaints include; the heater did not work real well (it’s November in the panhandle)  and there were missing cable channels (Fox was out and we were told “the owner is a democrat”).   That being said, all the lamps had extra electric and USB outlets, so plugging in was a breeze.

A bit more than we wanted to pay – but it was clean and quiet (despite kids across the hall) and overall a good overnighter.