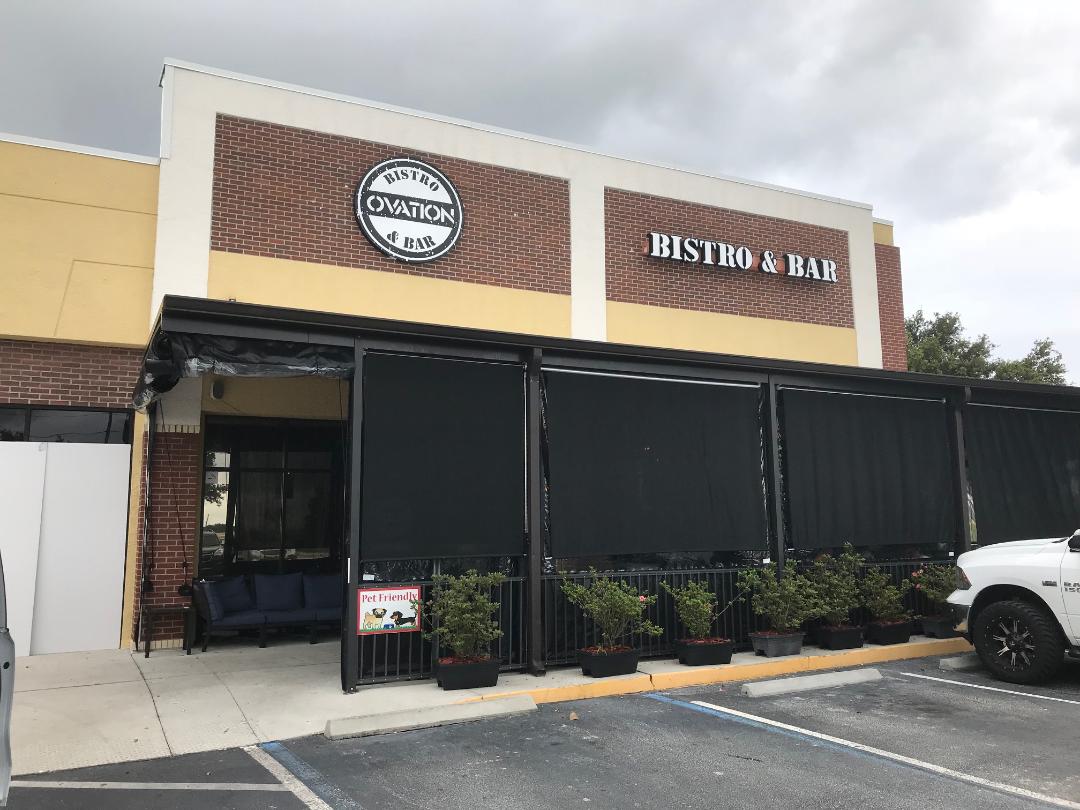 We found the Ovation Bistro & Bar first while looking for a place to eat near I-4. This one was in Davenport. It was mid afternoon and we ended up having a late lunch.

It was a nice place, a lot of dark wood and leather, with an extensive bar. The food was good and the service was personable. These are things we later would find are emblematic of the Ovation chain.

Because of their location at the end of a strip mall, owners were able to wall-in the area along the sidewalk They then used outdoor patio furniture in groupings for an outside seating and a waiting area. It both gave people a comfortable place to sit and provided a means for customers to interact on a more personable level.

Our initial experience was a good one both the food and the service was wonderful. Little did we know it was part of a local chain.

A few months later we found their second restaurant while we were in Cypress Gardens – near Winter Haven. Known as the “Ovation2 Bistro & Bar.” We again got a good lunch and wonderful service. In fact, our greeting came from the manager himself who had been working the front desk.

Like the Ovation in Davenport, the Winter Haven location made use of their outside sidewalk space. Despite the fact they were not able to enclose it. There was outside seating on the one side, and an outside sofa on the other.

It was a good enough experience that we have revisited this location a couple times when we were in the area.

Their third location is in Lakeland. It took us a while, but we finally found it.

Having visited the other two, we decided to finish out the trifecta. The place is significantly larger than the other two – and does not have the same cozy feel. Our experience was that it wasn’t nearly as good foodwise. However, I noted they do have a giant bar area – which probably is where this location makes it’s money.

But in the end – the wait staff was quick, pleasant and attentive. We considered it to be overpriced for what we got. Plus, it lacked the atmosphere of the Winter Haven location. From the looks of it, the place probably hops at night.

We first mentioned Ovation in a blog where we suggested Eight Restaurants on the Ridge You Owe it to Yourself to Try.

A veteran-owned and operated chain owners of the Ovation Bistro & Bar say they are “unashamedly passionate” about the food and drinks they create. And they back it up. Ovation was voted the Number One Restaurant in Davenport and they have been voted The Best Smokehouse in Central Florida.

Apparently, it has grown in less than a decade. Our first experience was at the Davenport location – that also was their first restaurant. It opened in 2014. The Winter Haven and Lakeland locations followed.

All three are located in strip malls.

They also have a charitable arm. The Ovation Bistro Foundation is a non-profit company. Its announced mission is “to help Polk County residents.” At last report, they had donated over 30,000 meals with Feeding America Tampa Bay and supported hundreds of charities and even given out scholarships to local deserving students.

When it comes to good food and good service, when in Polk County, a visit to any of the Ovation Bistro & Bar locations is a pretty good choice.