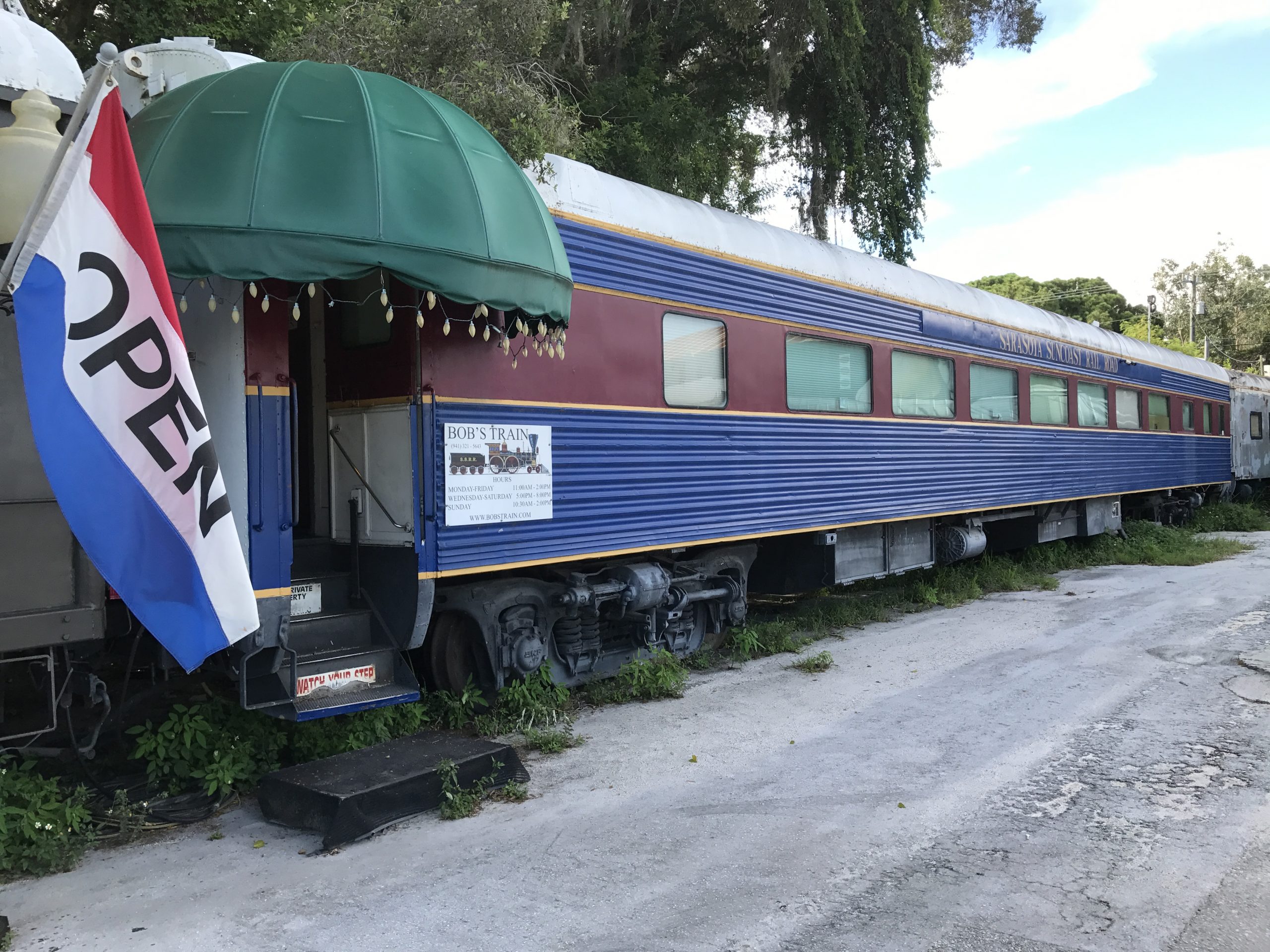 We had read about Bob’s Train. It is a restaurant in a railway car, tucked away in a Sarasota industrial park. I must admit, it was no small feat to find the place. We had been cautioned some GPS might not be able to find it – ours was one of them.

Those who follow us know we like a challenge. So after circling about for a while, we were able hone in on the location and drive back at an apparent industrial park. That’s when we saw his signature blue rail car.

The railroad car is one of four that sits on a rail spur. Three of the four former circus cars have been restored. The last one, John and Mable Ringling’s private car, still is under construction.

It was a fairly good-sized step for us to climb into the car, but let me tell you, it was worth the effort. Inside was a double row of tables leading to a bar. A young lady greeted us and told us to “sit anywhere.”

She then brought us a menu and gave us a bit of time to look it over. There were choices from entrees to salads or sandwiches. I immediately knew I wanted a MOOSE burger. My wife selected The Chicago Dog. But more about that later.

More About the Train

While we awaited our order, I went exploring. The second car proved to be a museum of sorts. On the wall I found literally hundreds of photos of circus performers, posters and well preserved artifacts. Some of the people I had heard of, some were totally new to me.

Off to the side, there was a galley, where Bob himself was hard at work cranking out orders. I then found another room. There was a table with a series of cantilevered squares. Later Bob would tell us that was his own creation, where eight left-handed people could sit and dine comfortably, without banging elbows.

Walking into the final car, there was yet another entire seating area. Like the first car, it was a double row of tables set for another group of happy diners. It was anchored by a beautiful old piano. Later Bob would give us a history of the piano, noting that he was in the process of refurbishing it.

From what I could tell, already it played pretty well.

So I made my way back to the main dining car and sat down with my wife. As we talked, we looked past each other to the video screens on either end of the car. There played what seemed to be an endless loop of home movies. They were from circus folks showing much of the backstage scenes from various circuses.

The films showed everything from roustabouts loading cages and rail cars to acrobats and jugglers practicing before the show. There also were some clips of actual circus performances. Most were in black and white and gave a seldom seen view of what went on behind the Big Top.

We were entranced by the films as our orders arrived. They were a wonderful treat.

The food was tasty and reasonably priced. Like everything served on Bob’s Train, it was Bob’s cooking and Bob’s own creation. In fact, the MOOSEburger is not actually moose. It is a composition of a Black Angus beef patty, topped with Mozerella, Olives, Onions, Sauce and Extras. (I highly recommend it).

Robert Horne – aka “Bob” – is the epicenter of the entertainment. After his work is finished in the kitchen, he comes out and regales the customers with stories of the circus, the train renovation, Doolittle’s Raiders and the US space program.

He told us the story of how he came into possession of the rail cars, which originally were part of the Ringling Brothers’ Circus. A former circus performer himself, Bob refurbished the cars and decorated them with donations from all over the world.

His latest project is JoMaR – the private rail car of John and Mable Ringling. It has been under construction now for better than three years. Although parts are hard to come by, Bob told us he is a modern day Renaissance Man who sculpts, paints and invents. He believes through use of plans and schematics he can replicate parts he cannot find.

As Bob told us, his train is known throughout the world. The only problem is, nobody can find it. The actual address is 2211 Fruitville Rd. in Sarasota. But many times, the GPS cannot locate it.

So, while on Fruitville Rd, turn North on to School Ave. Follow the bend West as School turns into 3rd St. Take the first right. Continue into the property which appears to be an industrial park. Drive to the back and look for Bob’s Train. It will be on your left.