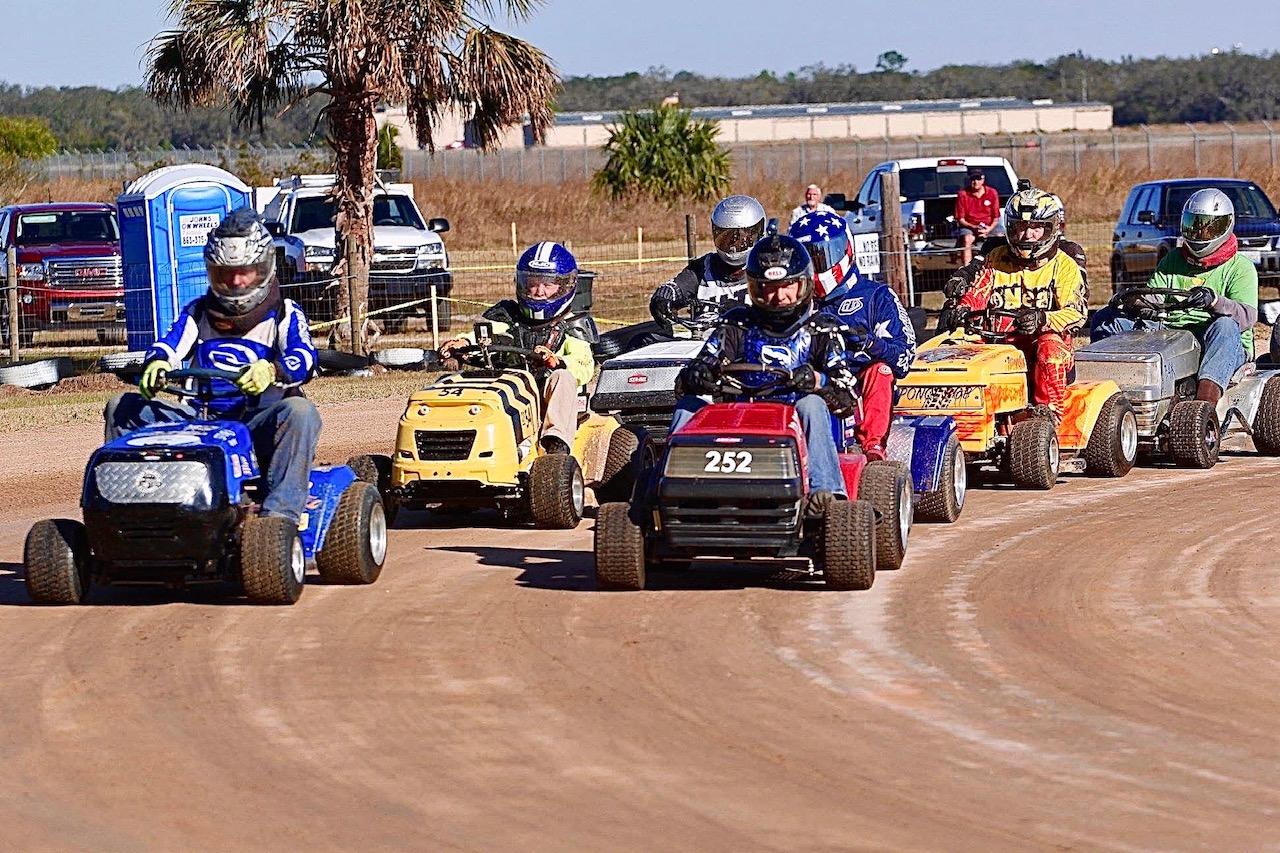 While many people enjoy their riding lawn mowers for trimming grass, in Avon Park they use them for lawn mower racing. Racing you say? That’s right! We’ve discovered that Avon Park actually is “The Cradle of Lawn Mower Racing” in the United States and they have a track to prove it.

So we visited the Avon Park Mowerplex and saw it up close and personal. It’s located on the grounds of the Avon Park Airport just off Highway 64 west of the “City of Charm.” Wes Pyburn, president of NASGRASS, told us it was the first for-purpose lawn mower racing facility built in the United States.

By the way, NASGRASS is the North American Society of Grass Racers and Sod Slingers. It is the sanctioning body for the races.

The schedule we were given shows events on the second Saturday of each month from September through May. But the action kicks up in earnest in March when they hold their annual “Snowbird Nationals.”

The competitors take the blades off their mowers, then soup them up for racing. Some can reach speeds of up to 50-60 miles per hour on the clay track. I personally saw a readout on a fan’s radar gun and was amazed.

Actually, the Nationals really should be called the Internationals. Wes told us that over the past couple years, they have had drivers fly in from England to compete with other mower racers from all over the United States.

We were pretty impressed.

One of the neatest parts of the Mowerplex is the facility itself. We saw all the elements of a typical stock car short track. In addition to the stands, we noted an announcer’s booth, lights and flag stand. They even had a Winner’s Circle. My favorite part, of course, was the food vendor. He served us up some tasty burgers and barbecue.

Strolling around the grounds, we saw that they had assembled a small play area for the kids. Wes told us that having activities for the youngsters was a regular feature of the race. In fact, there’s even a youth division for some of the older kids to run their own class of mowers.

But the best part for us, was the family oriented atmosphere. Walking around there were young people everywhere. They don’t serve beer and we heard no real foul language. This is a place we can highly recommend both for the entertainment value and the overall experience.

Even as we wandered through the pit area, we saw the encampments were populated by families. At times, there were as many as three generations enjoying the sport of lawn mower racing.

In the end, we know it seems wacky and maybe it is. But for our buck, lawn mower racing is a whole lot of fun and at a fairly low pricepoint. And if you want to see the best of the best, we suggest the Snowbird Nationals in March.

However, if you cannot make that, it’s the second Saturday of each month from September to May. You can see more at their website nasgrassinc.com