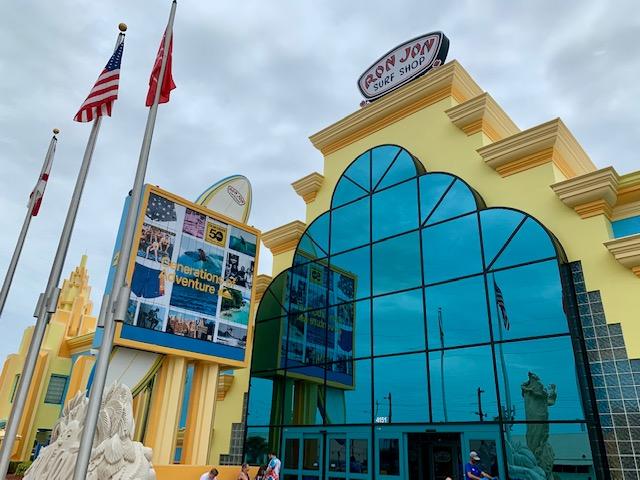 We had seen the Ron Jon’s Surf Shop billboards for years. So when we visited Cocoa Beach, we decided to pay them a visit. Even if you are not a surfer yourself, you have to be blown away. If nothing else, by the sheer volume and scope of their inventory.

After all, it’s not only the flagship of the 14-store chain, it’s the biggest surf shop in the world.

The Ron Jon Surf Shop began in New Jersey in the late 1950’s and quickly headed south to Cocoa Beach Pier. It has grown to a massive two-story outlet full of surf boards, clothing and accessories.

There’s a huge line of surf equipment. For instance, We saw surf boards and boogie boards. Some are long, others are short. There are wide ones and there are narrow ones. There’s every design you can imagine (and some you cannot.) Plus, there’s a full line of accessories for the avid surfer.

Are you looking to make a fashion statement? There’s two floors of clothing for men, women and children. There are T-shirts and sweatshirts. You can find racks of hoodies and jackets. There are shorts and swimsuits – and lots of different options for hats and footwear.

We saw seasoned shoppers rifling through the displays looking for the exact right outfit in the exact right colors with the right accessories. Naturally. most all of them bore the trademark Ron Jon logo.

We also took time to browse their accessories, there were Ron Jon cups and mugs. There was plenty of jewelry, bumper stickers, magnets, decals and even Ron Jon logo phone cases. And of course, suntan oil and other beach accessories for those heading out for sun and fun.

When we were there, Ron Jon’s was celebrating their 60th Anniversary. To that end, they had mounted a huge sand sculpture in front of the building in honor of the occasion.

Since the beginning, Ron Jon has been all about the marketing. The Ron Jon Surf Shop logo and name has become recognized around the globe.

They claim that it has been spotted on the space station Mir. It has purportedly embraced one of the legs of the Eiffel Tower. And every day, it is seen on vehicles ranging from ’65 Ramblers to ’14 hybrids.

And yes, we even got one for the Funmobile (Mrs. Funmeister has not yet warmed to the idea that it should be prominently displayed on our bumper).

When you go to certain cities, you go to see the sights. In New York it’s the Statue of Liberty. In Cocoa Beach, it’s Ron Jon’s.