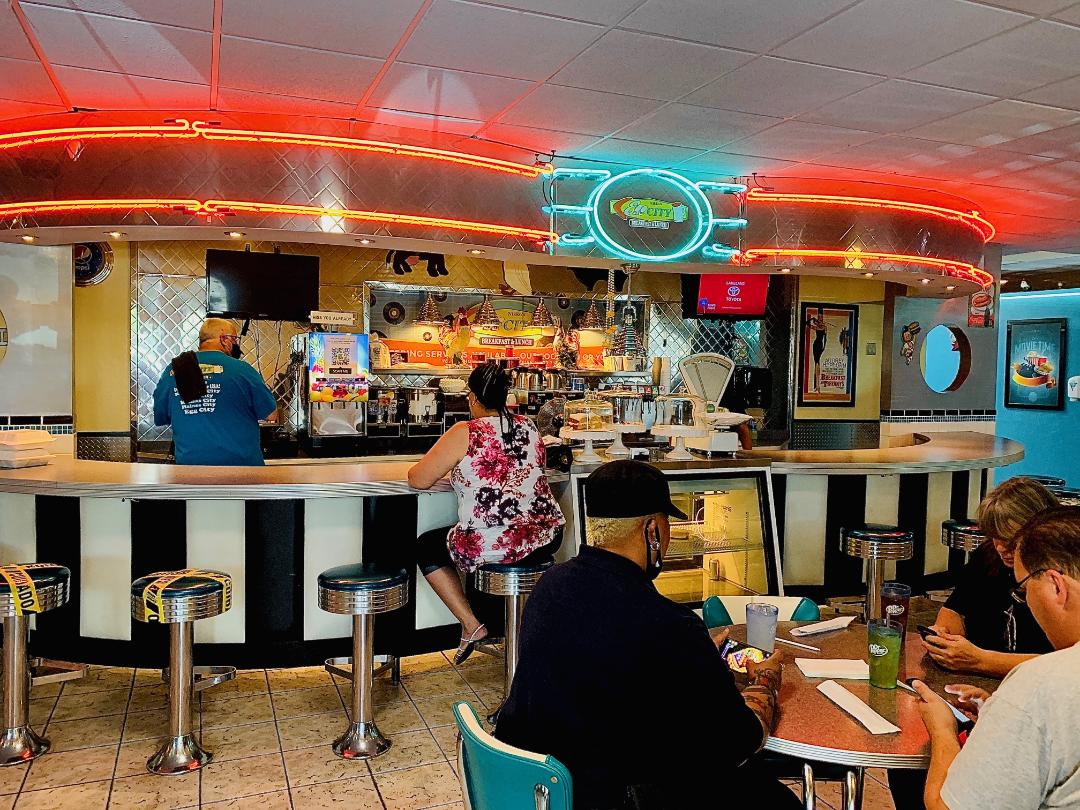 We were cruising up Highway 27 through Haines City looking for brunch. There, we came upon The Egg City Diner. Little did we know that in addition to a great meal, we’d get thrown back in time.

We pulled into the parking lot to a single story building. It was before lunch so there weren’t many cars. I can have breakfast for any meal, so this sounded like a good choice.

As we approached, the diner theme became more apparent. The red walls outside were bordered with checkerboard and chrome. As we got closer, we could hear the music of the 1950’s. We also began to pick up the telltale aromas of breakfast on the griddle.

I swung the door open and we were greeted by a metal police officer, asking us to wait to be seated. He also suggested we take some hand sanitizer while we were waiting.

It’s the kind of metal statue used in the 1950s. They rolled it out into the middle of the street to slow motorists down in school zones.

The metal officer was all part of the theme. There were records on the wall, old posters and giant murals. Stars of the show included Elvis, Marilyn Monroe and James Dean.

We decided not to sit at the breakfast bar but chose a booth instead. I noted that the booths were padded and upholstered. To my eye, they looked much like the seats of a 1957 Chevy. In fact, they were as comfortable as they were stylish.

Oh, the breakfast bar looked nice too – we just weren’t ready to spend that much time on a stool.

Egg City is a diner – meaning that they are open only for breakfast and lunch. That being said, we were impressed with the size of the menu. For breakfast we had our choice of omelets, pancakes, waffles and french toast. Of course there also were the traditional breakfasts, biscuits & gravy or even mush.

I opted for the four-egg Greek Omelet, while my wife got a two egg breakfast. We both got the home fries and biscuit. Although not made on premises, the biscuits were some of the better ones we have enjoyed.

We got quick service and the kitchen cooked it up just the way we’d ordered it. No complaints here.

The Egg City Diner has lunches as well. We are looking forward to a return stop to try that menu. Among the selections there are Big Burgers, Deli Sandwiches, Clubs and their “Famous Reubens.” There also are a selection of salads and dinners.

Those who follow us know we like the fun and funky. For us, this was another happy accident. We’d stopped into this place on a whim. But we were impressed by the decor, the prompt service and the quality of the meal.

If you happen to be cruising through Haines City on Highway 27 – this is a great stop. It’s veteran-owned and a lot of fun. If you live in the area they have banquet facilities and catering is available.

Remember – get there early. They are open daily from 7AM until 2pm.