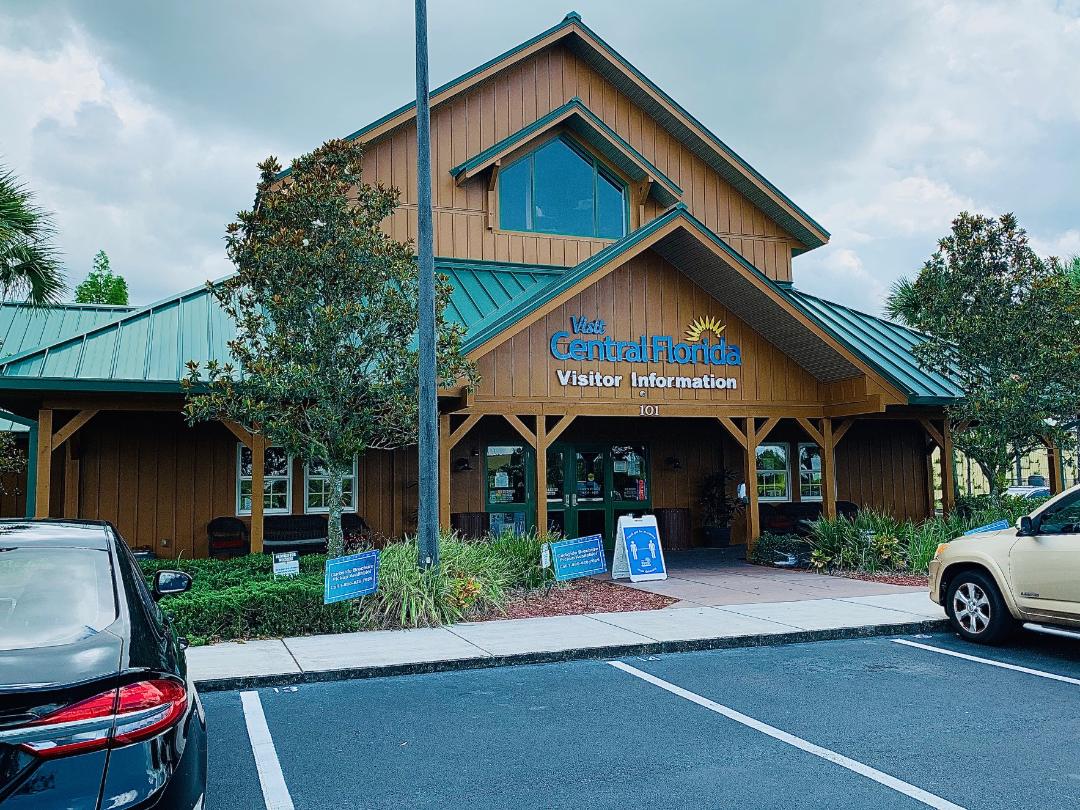 Located half way between Tampa and Orlando off I-4, it’s a handy stop for travelers. Plus, it’s the gateway for a truly under-visited part of the Sunshine State. We have found there’s a lot to see and do in central Florida.

In fact, there’s a lot to see and do inside the Visitor’s Center – there’s a whole lot more than just pamphlets.

Pulling open the door of the center, we were greeted by a beautiful antique Chris Craft motorboat. (It is my absolute favorite runabout.) This one is mounted with a gleaming metal pole behind the driver’s seat. That is where the ski tow-rope is fastened.

We recognized this immediately as an artifact from the glory days of Winter Haven’s Cypress Gardens. The pole was mounted above the steering wheel, so a precision water skier could make a 360-degree circle around the craft as part of their daily show.

In addition to a couple of displays commemorating Florida’s original theme park, we found the Polk County Sports Hall of Fame Preview Center. This was an opportunity to get a sampling of the collection amassed by the Florida Sports Hall of Fame Foundation. Browsing, we saw both wall hangings and cabinet displays honoring a myriad of familiar names.

We initially were drawn in by the bust of baseball great Dick Howser. But also on display we saw tributes to baseball legend Ted Williams and Tampa Bay Buccaneer football star Lee Roy Selmon. We observed the gold blazer of Bucaneer owner Hugh Culverhouse in a shadowbox on the wall as well.

Some of our favorites were tributes to aviatrix Betty Skelton Frankman and the famous hydroplane “Miss Budweiser” of Bernie Little fame.

Well as much as we like sports, we love the great outdoors. The folks at Visit Central Florida have helped out with a number of exhibits. To be honest, we have seen a lot of birds in our travels. However, identifying them has sometimes been a challenge. We noted a display there that now aided us in figuring out exactly what we are seeing.

In addition to statues of the pelican, ibis, heron and egret, we also noted some great pictures of eagles – which also nest in Florida.

I thought one of the coolest things was a “Share the Moment” iSnap camera kiosk. It could take your photo, then share it over to your Facebook or Twitter account. We could have emailed it if we’d desired. Our favorite part was that it came at no additional charge.

Out on the back porch we found a central Florida ecosystem. This was a small pond, ringed with cattails and other native vegetation. We could see it was fully stocked with fish. (and no, you cannot bring your rod and reel.)

As we understand it, the only problem at this time is alligators. Yes, apparently a couple of small gators found this little slice of paradise and have taken up residence under the deck. Although they don’t know it, they are scheduled for relocation.

A Taste of Polk County

In the past we have written about such places as Webb’s Candy Company and Davidson’s of Dundee. Well, those at the Visit Central Florida Visitors & Information center can purchase stock from those places and more.

In addition to the edibles, there’s plenty of other Florida-themed merchandise. You can find candles, commemorative spoons, cups, bags, even place mats, towels, pot holders and oven mitts.

And if you’d like, you can get a free cup of real Florida orange juice courtesy of Ridge Island Groves in nearby Haines City.

In short, we had a great time during our interlude at the Visit Central Florida Visitors & Information Center. We saw some cool stuff and learned a few things. We even picked up a vacation guide with some wonderful tips on how to enjoy Imperial Polk County.