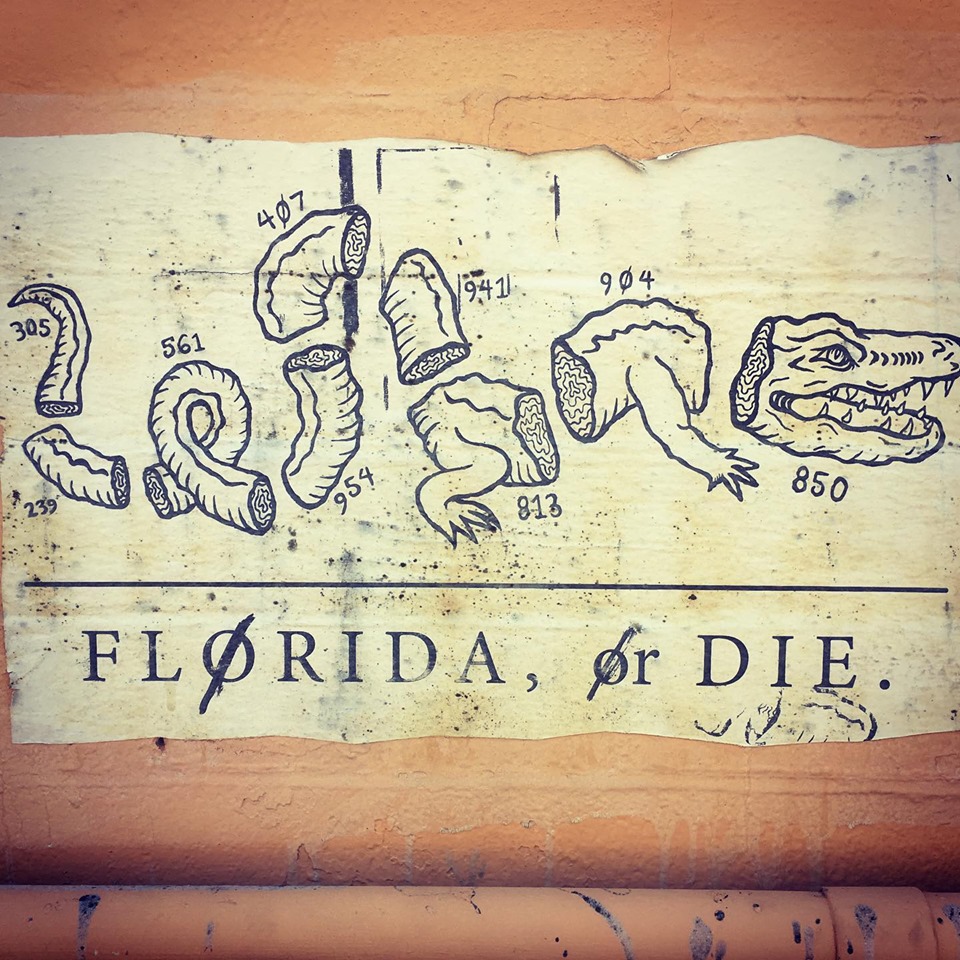 It was on May 9 of 1754 that the first cartoon appeared in an American Newspaper. Appearing in the Philadelphia Gazette, it was titled “Join or Die,” .

The ink drawing was penned by Founding Father Benjamin Franklin. It depicted a sectioned snake with each piece representing one of the colonies.

Now, our friend Mandy Longo of Mosquito County tours has discovered a very similar image. It’s located on the side of a building in the Mills 50 District in Orlando. She spotted it recently during one of their Little Vietnam Food & Art Walking Tours.

This is an 18 x 24-inch “wheat pasted” screenprinted newsprint banner. The image is a sectioned alligator, with each piece representing a different telephone area code. Its legend is “Florida or Die.”

The Rest of the Story

As it turns out, this is the work of Orlando artist Akyros. Although he is the one who made the rendering, he is quick to point out he was not the one who posted on the side of the Royal Tea building.

It is, in fact, a nod to Franklin’s original cartoon in the Gazette. That one rallied our nation to come together as one instead of separate entities.

“Benjamin Franklin is a huge inspiration of mine for his leadership, communication skills, and he owned his own print shop back in the day.” – Akyros

Like Franklin, Akyros would like to have his own print facility that empowers creatives and leaders to spread their ideas/artwork. Akros said he made the design just for fun, not realizing how impactful the imagery resonates with the local Orlando community.

Incidentally, if you like the design, it is commercially available on t-shirts and posters. Check out his online store: https://akyros.co/collections/exclusive/products/fla-or-die

Sadly, the 863 area code is missing from this rendering.

Meanwhile, Mandy Longo, who found the poster, said the Akyros design was emblematic of the kinds of things she finds while researching her Mosquito County Tours of “The City Beautiful.”

“Orlando is such an interesting place, and we’re always discovering new things when we escort our guests about.”

You can find Mandy at https://www.mosquitocountytours.com/