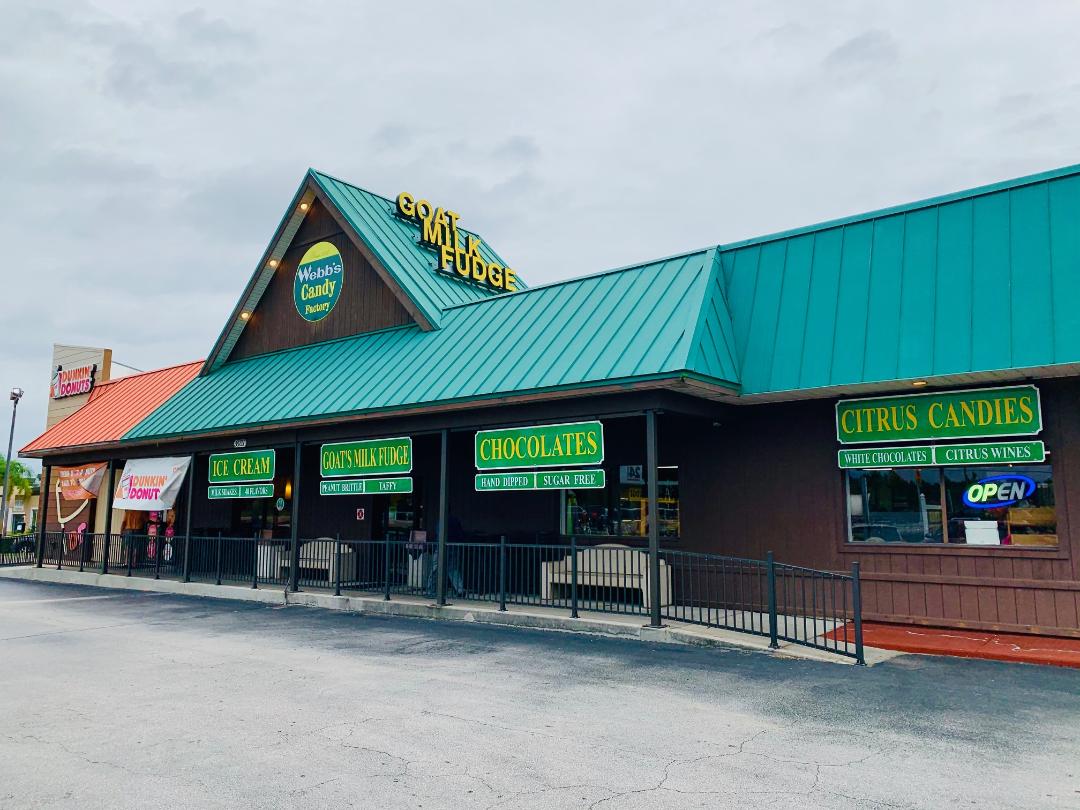 We have passed by Webb’s Candy Factory on Highway 27 in Polk County many times. But like others, we’d never stopped. Recently we pulled in to visit and found out what we had been missing. Previously we had blogged about our trip to Davidson’s of Dundee and sampled their citrus candy. This time it was Webb’s world-famous Goat Milk Fudge that received our attention.

Of course we were intrigued by the lure of goat milk fudge. And when we ran up on RJ Webb himself, we got an education. RJ is a third-generation Webb and gave us the history and a personal tour of the facility. Apparently, the goat’s milk does not affect the taste as much as the texture of the fudge.

It also dries the fudge out a bit more quickly – especially in the smaller sizes. So it’s hand-dipped to seal in the freshness. For our samples, I took the dark chocolate while my wife took the maple flavored. Both were rich, delicious and well worth the price.

How They Make It

The secret of Webb’s success is they have not tried to improve on it. Their goat milk fudge comes from a recipe Paul and Nadine Webb brought from their original Webb’s Candy operation that was started in New York State back in the 1940s.

The citrus candies also are manufactured using the same proprietary formula developed by Kathryn Stillman and Maude Blodgett in the 1920s. That formula was used by Taylor’s Tropical Sweets until it was sold to the Webb’s in the 1970s. To this day the process remains unchanged.

Possibly the best part is that much of the machinery used in that era still is in use today. In the production room are the original copper kettles, water-cooled tables, mixer, scales and cutter that have been producing tasty treats for decades.

There’s no one single element that is the key. The secret lies is in the facilities and adherence to the original recipe.

In giving us the tour, RJ explained how he had taken time to work in the candy room to learn exactly how the products are made. He said that culinary students sometimes work in the operation and even they learn a few things.

“Sometimes we have to call Miss Nancy in to figure out what happened when a batch is not just right,” he said. “Miss Nancy,” would be Nancy Richardson. Recently retired, she had been working at the Webb’s kitchen since shortly after they took over the operation and moved it to it’s current location in the early 1970s.

Although they have soared to fame on citrus candy and goat milk fudge, there’s a lot more to Webb’s. They also have a selection of chocolate bars, peanut brittle and even salt water taffy. The store also boasts an extensive ice cream shop, a wide selection of wines and of course, great Florida souvenirs.

And the wine shop is not stocked with your typical Cabernet. Most of the wines are made from fruit products. Plus, the flavors as interesting as the names. We found Mango Mamma and Hurricane Category 5. Moreover there was Blackberry Gold and Cocoa Polada featureing flavors such as Florida Grapefruit, Strawberry and Tangelo.

As we noted, Paul and Nadine Webb had started their Webb’s Candy Factory in Mayville, New York in the 1940s. That operation was turned over to relatives who have continued to expand it much like the Florida store.

And when he arrived in Florida, Paul Webb did not give up his penchant for real estate. Webb Realty is next door to the candy factory in what’s referred to as “Webb Square.” That also is home to medical and professional suites. a large gas station/convenience mart combo and “Webb’s Car Wash.”

In the end, it’s a wonderful combination of old Florida and new Florida. Arriving, you see a large building with a great candy factory and showroom. The building also houses a Dunkin’ Donuts chain location.

Inside Webb’s is a true taste of old Florida – citrus candy, goat milk fudge and ice cream. It’s all made in the old fashioned way, with old fashioned great service at the counter.

The Worst Travel Advice Ever Given