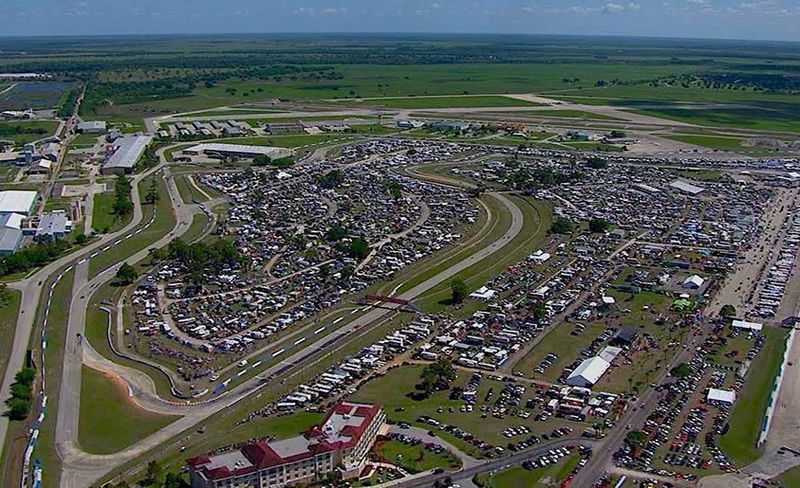 As the summer ends the annual baking of central Florida, action heats up at the Sebring International Raceway – but it won’t all be on the track. Oh, there will be plenty of cars on the circuit over the next 120 days or so, but officials at SIR have at least one festival for those who just want to enjoy the ambience of the 300+ acres that comprise the historic motorsports facility.

At the end of September, the track will host nearly back-o back drag racing events. On Thursday, Sept. 27 they will come off their summer break and host the first of the winter season’s regular drag racing bill for local amateurs to test their reaction times and car speed down the eighth mile stretch of the historic front straightaway.

On September 29 will be the inaugural “The Battle of the Bridge..” Presented by Safety-Kleen, it will be a special event – featuring three different classes of racing and drift competitions. There also will be a car show and a Power Wheels race for youngsters.

On October 13, the focus will; shift from the track to the paddock, as the raceway hosts their first-ever craft beer and music fest. Dubbed the Brew Jam Grand Prix, the event will combine a wide selection of craft brews, food and live music.

Three popular Sarasota-based bands will perform starting in the afternoon and continuing on into the night. Multiple Florida breweries will provide sampling opportunities for their individual products.

In addition there will be a watch party on a giant TV as the Petit Le Mans IMSA road race roars around Sebring’s sister track at Road Atlanta.
“Sebring knows how to party and this will be a great one,” said Sebring International Raceway President and General Manager Wayne Estes.

November will see a return to road racing as the Michelin SportsCar Encore has it’s first-ever run at Sebring’s historic 3.74 mile circuit. This competition will feature four classes running the track simultaneously. during the four hour main event.

There will be the LMP3 prototypes, as well as the production based GT3, GT4 and TCR divisions.

On the Saturday of that race weekend, there will be a Mazda MX-5 race, which may prove to be the hardest-fought competition with a reported $50,000 up for grabs.

That weekend also is slated to have a big Saturday evening concert as well.

Then on November 30, the Alan Jay Pistons & Props event returns to Sebring. It’s the biggest vintage racing event of the year at SIR.

“This event celebrates both Sebring as the birthplace of American endurance racing and also Sebring’s military history as a World War II B-17 bomber training facility,” Estes said.

Some of the track’s straightaways began life as runways at Hendricks Field, which now has become the Sebring Regional Airport, which is adjacent to the track.
Vintage race cars and airplanes will be on display, with the cars engaging in a number of racing events by class around the 17-turn road course.
It all began at the start of September with the annual appearance by the Champ Car Endurance Racing series Presented by RVA Graphics and Wraps, They staged a 14 hour endurance race.
The Champcar Endurance Series is “about tearing down high-dollar roadblocks that, in the past, have restricted people with a passion for cars and racing from getting fully engaged and involved in motorsports.”

For information on these events and more call (863)-655-1442 or visit http://www.sebringinternationalraceway.com

What We Love About Florida