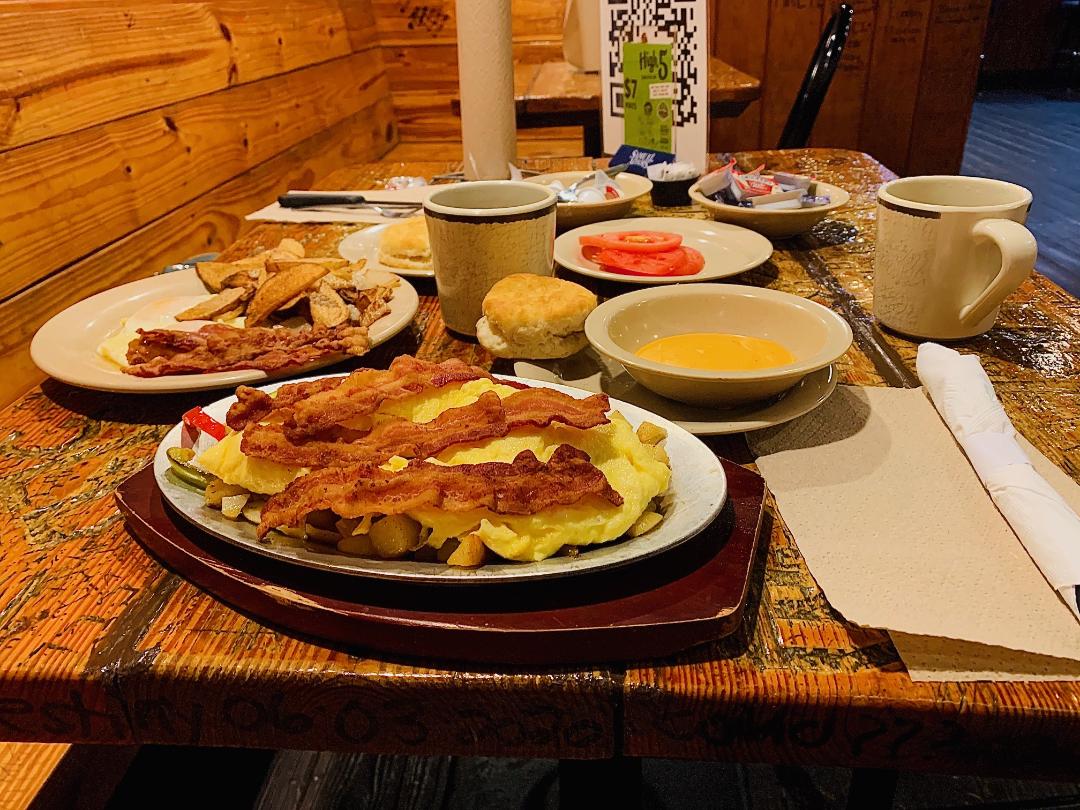 We have written in the past about the Wild Turkey Tavern in Avon Park. Recently we learned that they are serving breakfast. They’re only available on the weekend, which fit our schedule. So, we decided to drop by and give it a shot.

The restaurant only recently added the breakfast option. They start at 7:AM and run until 10:30 AM on Saturdays and until noon on Sundays. When we arrived about 8:30 – it was pretty quiet. It was nice because we had our waitress Heather pretty much to ourselves.

I ordered one of their famous Cracker Skillets. My choice was bacon – although I had several options. My wife selected a Wild Turkey Egg Breakfast. It came with “taters & onions” and we both had biscuits.

I will tell you our breakfasts both were generous portions and quick out of the kitchen. Moreover, it was delicious to say the least. We already have done our five best breakfasts so far in Florida. As we compile a new list, this certainly will be on it.

First off, the coffee was great. Secondly, we were delighted that they were able to follow instructions. The bacon was indeed crisp and the biscuits – although they don’t make them on site – were extremely good. My wife said they were just short of being cat-head biscuits.

I got their beer cheese sauce on the side and used it for dipping. This has a really different taste to it. My recommendation is get it on the side and try it for yourself.

Although the Wild Turkey is not known for their breakfast menu, that could easily change. We saw several choices that beckon us back for another round. Our meat options for the skillets included steak, country ham, smoked turkey and Uncle John’s Pride sausage.

The same choices came with the egg breakfasts. Additionally, we could have enjoyed a number of different breakfast sandwiches or the very filling “Camo Biscuits.” Heather told us that’s a full order of biscuits and sausage gravy over a bed of home fries. The whole thing then topped with two eggs and their beer cheese sauce.

As I said, we got there about an hour and a half after opening. But as we dined, more folks began to filter in for their first meal of the day. Our guess is that this is a later crowd than most places – some of whom may have had an energetic night-before.

The Wild Turkey Tavern has been in the same location for decades. Many of the customers have carved their names on the tables and into the walls. Some simply have left their mark with a Sharpie pen.

Naturally, we could not leave without leaving a little something at the boot to indicate we had been there.

We previously recommended this place for dinner. Now, we can recommend it for breakfast as well. It has a great atmosphere, quick service and our selections were hot and tasty.