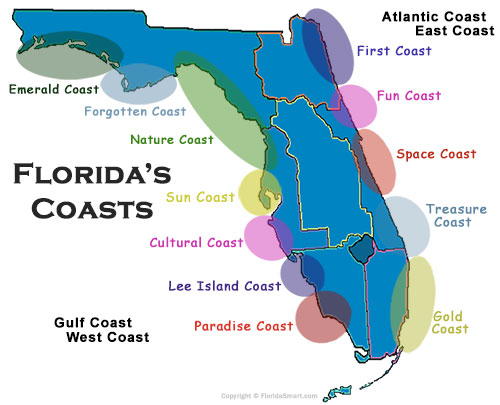 The Sunshine State has more beach area than any other state. And each of the 12 coasts of Florida has it’s own designation. We have compiled a dozen different named locales, although it appears there might even be more. Starting in Pensacola and ending up in Jacksonville there’s some 1,350 miles of beach from the Gulf to the Atlantic. We have taken some time and compiled a list of the names of Florida’s unique coastal areas .

The Emerald Coast stretches 100 miles from Pensacola to Panama City. This one of the coasts of Florida encompasses five counties. These include; Escambia, Santa Rosa, Okaloosa, Walton and Bay. It has nicknames like the Miracle Strip and the Redneck Riviera.
We discovered that the coast got it’s current name from a then-junior high school student in 1983,
He pointed to the emerald green color of its waters The color of the water north of the Gulf of Mexico combined with white sand with a crystal base results in beautiful blue-green water in the Emerald Coast region.

Florida’s Forgotten Coast  is billed as “the last remaining stretch of unspoiled, pristine Gulf Coast beaches that haven’t been overrun by high rises and strip malls.” It encompasses the section of coastline from Mexico Beach to Apalachicola Bay.
The name for this coast of Florida was coined in the early 1990s. It came from the Apalachicola Bay Chamber of Commerce. As the story goes, they developed the name after a group of tourism employees forgot to add information on the region to their brochure about Florida.  The area has the same white sand and blue green water but is largely uninhabited and undeveloped.

Formerly known as The Big Bend or “The Lonesome Leg,” the stretch between Wakulla down to Hernando counties as been re-designated as The Nature Coast. This eight county region also was named in the early 1990s to attract vacationers.
It is an area of almost a million acres. Here, it is easy to discover the “real Florida,” The Nature Coast features dense forests, prairies, and blackwater rivers. It offers ample opportunities  for trail hiking, kayaking, bicycling, fishing and bird watching. Even so, vacationers are never far from a town. Many of them quaint and historically significant.

The Suncoast Region of Florida ia one of our favorites. It picks up at St. Petersburg, then runs south past Clearwater, Tampa and Saraota to Bradenton. The region draws its name from the number of sunshiny days they are able to draw each calendar year. This one of the coasts of Florida also is home to some of the best beaches in the nation – this is due in part to the quartz sand that is paired with its high water quality. The fact that the beaches are backed up to good sized cities, means there are ample opportunities for lodging, dining and entertainment.

The Culture Coast lies just south. The area apparently has taken the designation as it is home to a rich mix of artists, performers, museums, galleries, theater, music and art schools. In addition to the Ringling Estate, the Van Wezel Performing Arts Hall and the Sarasota Opera house, there are many film, art and music festivals that dot the calendar year.
We have found it also is the home to a number of great beaches. Anna Maria Island, Siesta Key and Lido Key are among the most popular. In fact, Siesta Key has been named the Best Beach in the United States.

Lee Island Coast is named after an island, but it’s actually named after Lee County, home to the beaches most commonly associated with southwestern Florida. This area includes some of our top picks – like the islands of Sanibel and Captiva, Fort Myers and more than 100 small coastal islands. Sanibel particularly has been recognized as one of the best shelling beaches in the country.
Thomas Edison, Henry Ford and other well-known American personalities spent winters in Lee County, which helped put this region on the map.

Around the Horn, The Paradise Coast continues south and includes Naples, Marco Island, Everglades City, and Immokalee. The white sand beaches on this one of the coasts of Florida are clean, unspoiled and plentiful. At some, you can walk directly onto the sand from your hotel. Others are accessible only by boat. Naples is home to the thousand foot long Naples Pier and there are other attractions such as the Corkscrew Swamp Sanctuary, Barefoot Beach Preserve and Tigertail Beach

The Florida Keys, or the Conch Republic, does not actually have a coastal designation. Since its founding in 1822, Key West became the adopted homes to many pirates, poets and political pundits.. Must stops include viewing the treasures from shipwrecks and discovering the haunts of their literary heroes. You also can marvele at the Victorian architecture and lush, colorful gardens.

We can recommend some beaches. The most popular stretch of sand in Key West is Smathers Beach, There are plenty of activities, food venders, and watersport rentals here and parking is free along the boulevard. For a less crowded option there’s Higgs Beach inside CB Harvey Rest Beach Park. it also features free parking, covered picnic areas and the White Street Fishing Pier.

Moving north up the Atlantic side of the state, The Gold Coast includes some 60 miles of shoreline from Miami up to Ft. Lauderdale. It also encompasses West Palm Beach, (though its definition has changed over time), The name is said to be a reference to the wealth and ritzy lifestyle of the area.
That being said, much of the natural treasure of the Gold Coast remains. There are 300 miles of Intracoastal Waterway, in addition to the Fort Lauderdale canals. And of course the Everglades is just a few miles inland.

The Treasure Coast moves northward up the Atlantic and encompasses Indian River, St. Lucie and Martin counties. It also encompasses the cities of Sebastian and Vero Beach. You’ll find the “treasure” Treasure Coast is a reference to the Spanish Treasure Fleet which was lost in the Hurricane of 1715. Despite the Treasure Coast being a relatively small area, there are many historic cities for you to enjoy, some larger than others, but all retain a sort of small town feel.
In addition to the beaches, we discovered great attractions such as the Elliot Museum in Stuart and The Sunrise Theatre in Fort Pierce. In addition, you can stop by the aptly named Treasure Coast Square shopping center in Jensen Beach or visit Mel Fisher’s Treasure Museum in Sebastian.

For the most part, The Space Coast is in Brevard County. This one of the coasts of Florida has over 70 miles of coastline and cities such as Titusville, Melbourne, and Cocoa Beach. The name reflects their proximity to The Kennedy Space Center. The north end of Florida’s Space Coast is home to the Canaveral National Seashore and pristine natural habitats,  while the south is home to Sebastian Inlet State Park. The west is bordered by the St. Johns River and the east stops at the Atlantic Ocean.  There is a wide range of activities, from fishing and boating, to cruise ships, rocket launches and of course – the beach life.

Just up the road is The Surf Coast, or what we call The Fun Coast. This is the region also know as the Halifax area, It’s roughly north from New Smyrna Beach to Ormond Beach. Locals took on the designation in an effort to promote local tourism. That being said, New Smyrna Beach has been ranked as one of the top surfing locations – but also has been the Shark Bite Capital.  The area offers some of the finest wave action on the Eastern Seaboard. Surfing is a favorite pastime and the locals have the scoop on where to catch the best wave. New Smyrna is the perfect place for experts and amateurs alike. With rock ledges 4 – 5 miles offshore, the wave breaks are plentiful but swimmers are protected from dangerous undertows. Beginners like the beaches there because they can learn the sport in safe waters.

Ironically, our last area is Florida’s First Coast. This runs from St. John’s County northward with 75 miles of beach to the Georgia state line. The name First Coast (which sometimes is called the Historic Coast) refers both to the first permanent European settlement – St. Augustine. That was settled better than 50 years before the Pilgrims landed at Plymouth Rock,It also was the “first coast” in the state of Florida that was encountered traveling southbound down the Atlantic seaboard.  In addition to it’s history and pristine, natural areas, there’s golf. A lot of golf. Home to the World Golf Hall of Fame, THE PLAYERS Championship, PGA TOUR and Champions Tour, Northeast.

These are the dozen generally accepted coastal designations in Florida. How many have you visited? You may also want to see our post about the Vacation Regions of Florida.

The Vacation Regions of Florida