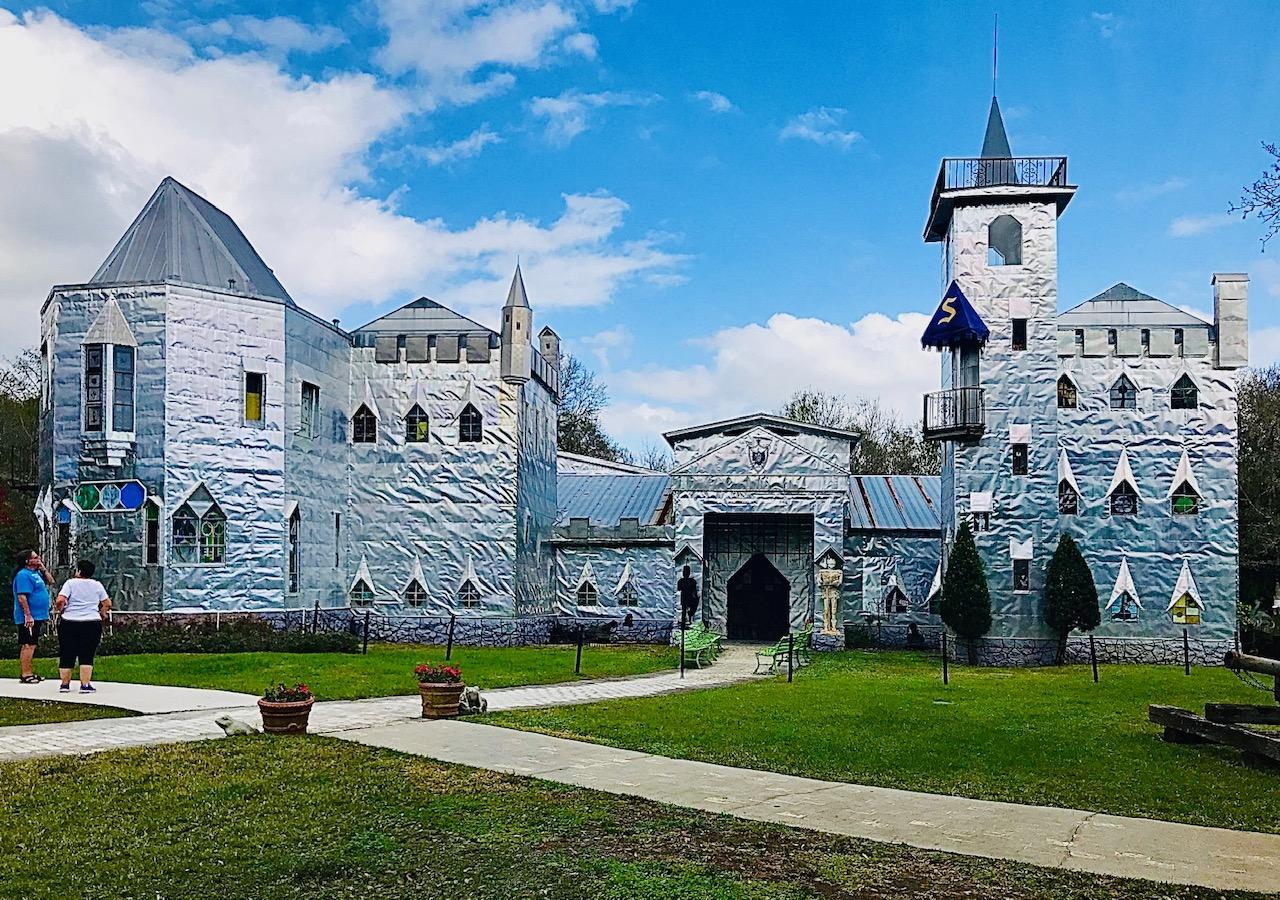 Deep in the heart of Hardee County lies Solomon’s Castle. The complex of buildings is the dream of one man – Howard Sanford Solomon. There have been lots of blogs about this place. Some call it “odd” or “weird.” However, we are here to tell you that those words do not begin to do justice to the truly unique experience we had there.

As our guide explained to us, Howard Solomon came to Hardee County in the early 1970s. He bought a tract of land at the princely sum of $350 per acre. What he didn’t know, is that it was Florida swampland. Undaunted, he built a house – and kept on going.

We found a number of buildings on the property. Those include a private residence, garages, the Ala-schmoe, the Boat in the Moat and of course, Solomon’s Castle.

The castle began as his home. He formed the building into a castle configuration by using hundreds of old aluminum printing plates. Those were from The Hardee Herald Advocate – the local newspaper. Because the newspaper’s pages are emblazoned on the plates forever, guides told us it now is “a time castle.”

Solomon was an artist in every sense of the word. He worked in almost every medium we could imagine. Inside the castle we saw stained glass windows, pictures made from cut wood pieces, metal wall hangings and metal sculptures. Each one was unique and each has a story behind it.

Self described as the Rembrandt of Recycling and the DaVinci of Debris, Solomon truly was the Wizard of Odds & Ends. Our guide Stacy informed us that he had a standing agreement for locals to drop off their junk at his front gate.

And they did. There generally was something waiting each day.

His statues are sculpted from oil drums, old car parts, beer cans, pieces of equipment, coat hangers and paper mache among other things. We were not permitted to take any photos inside the castle. Although Stacy told us that there were plenty of photos posted on their website.

That being said, we were able to get one photo of the Solomon family flag, which hangs in the ante room of the Castle.

Inside the castle we found a compendium of art. Literally hundreds of different pieces. Stacy told us that this represented a small percentage of the art that Solomon produced over the course of his lifetime. We marveled at the sheer number of pieces by this prolific artist.

In addition to his sculptures, there were 60 framed pictures, each comprising hundreds of pieces of wood. We also saw some 80 stained glass windows. The stained glass had everything from the signs of the zodiac to the seasons of the year.

How did he produce so much? Apparently he only needed two hours of sleep per night.

One of our favorite parts of the tour was that 100% of the artwork was based on puns. And bad puns at that. We saw “Evil Cornevel” – a motorcycle sculpted out of a corn planter. There also was a Chegal – half chicken and half eagle. One of our favorites was East NewHopia – Solomon’s vision for a perfect society.

In addition to the bad puns there were many “Hidden Howards.” We were able to discern many little insights into Soloman’s life by little clues he left in much of his work. We could tell you some examples, but we don’t want to spoil your tour.

The Boat in the Moat

Our visit to the castle actually began in reverse. Before the tour we started with lunch at the Boat in the Moat. This was a wonderful structure built by Soloman himself. Our waitress told us that as it sat, the boat would neither float nor sink.

We were both surprised and delighted by our meals. The portions were large, the sandwiches were tasty and it came out quickly. That was good, inasmuch as we were hungry.

Another delightful feature we found was that each day there was a different singer who performed on the back patio (or dockside as we were told.)

Our day found Pup Morse on stage. Pup was a wonderful performer who writes and sings all kinds of tunes. He told us his favorite was to write and sing music for scuba divers.

The Second Half of the Tour

The tour of Solomon’s Castle comes in two parts. We took both. In addition to the castle itself, there is a second building housing the last ten years of his work.

Inside that building are housed a dozen antique automobiles. Solomon decided to invest in the autos during the 2007 financial crisis. He got out of the stock market and bought something he could touch and feel. Automobiles.

We marveled at the compendium. Stretching back from a 1935 Ford 5-window to a 1915 Model A Speedster. Naturally, he made wall hanging art to go with each one. The building also holds a collection of sculptured cars, as well as trains and airplanes.

Again we were asked not to take photos inside. So we didn’t. But even if we had committed the entire visit to video it would not compare with an actual visit.

We are delighted to join The BBC, The Associated Press, Weird Florida and a host of other outlets in featuring this attraction.

Literally millions of people have visited the grounds over the years (including us). It is out in the middle of nowhere – or in the center of everything, We highly recommend it for a visit! Solomon’s Castle is not a cookie cutter tourist attraction, but a Florida memory maker.

There are two very important things. First, we are delighted to report there’s no admission to the grounds themselves and the parking is free. Second, you need to bring cash. They would not take our credit card, but pointed us to an ATM machine in the gift shop.