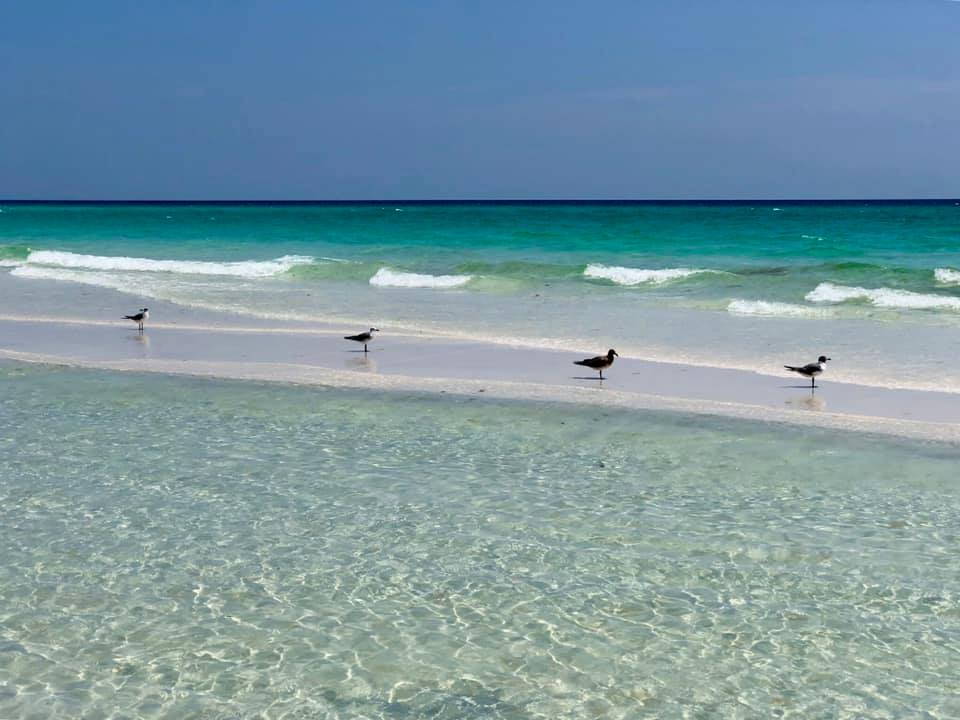 When we started our review of the 12 Coasts of Florida, we began with The Emerald Coast. It stretches 100 miles from Pensacola to Panama City.

The Emerald Coast actually encompasses five different counties. These include; Escambia, Santa Rosa, Okaloosa, Walton and Bay counties. In the past, the coast has been known as “The Playground of the Gulfcoast” and “The Miracle Strip.”

It also sometimes is referred to sardonically as “the Redneck Riviera.” That is due to the number of people from Alabama and Georgia who come south to enjoy its white sands and bluegreen waters.

In fact, the colors of the water was what inspired the “Emerald” moniker. It was a junior high school student who made that suggestion as part of a 1983 contest.

For those who like aircraft, Pensacola is home to the National Naval Air Museum and is home base for one of our favorites – the world-famous Blue Angels. Their beaches are lined with restaurants, there are craft breweries, museums and shopping in the downtown district.

Known for its beaches, fishing and golf, there’s plenty to do in Destin. One of our favorites is the Destin Harbor Boardwalk. Located in the heart of “The World’s Luckiest Fishing Village,” it is wonderful and better than a decade in the making.

Panama City Beach might be best known as a Spring Break location for college students. However, you can find cruises, fishing, eco-tours and The Shipwreck Island Water Park.

There’s also Santa Rosa Island. That plays home to the Pensacola Beach, Navarre Beach, and Okaloosa Island. However, much of its 40 miles are part of the protected Gulf Islands National Seashore.

Those who enjoy natural Florida have their pick of locales along the Emerald Coast. There’s the 15,000 acre Point Washington State Forest in southern Okaloosa county. They have trails for hikers and bikers and overnight camping.

We also found The Topsail Hill Preserve State Park which features over three miles of beachfront and over 1600 acres of unique habitat. Located near Destin, the Henderson Beach State Park has trails, a mile of shoreline and an Inn adjacent to it.

The Fort Pickens National Park and Aquatic Preserve spans 34,000 acres. It encompasses barrier islands and salt marshes. There you may view migrating birds.

In addition to the beach and fishing facilities, there is Fort Pickens itself. A pentagonal structure, it was built to defend Pensacola Bay in 1834. It was fortified after the War of 1812 and was one of four forts in the South never occupied by Confederates during the Civil War.

The aquatic preserve provides great diving opportunities. That includes the USS Massachusetts. The remains of the ship are submerged in the Pensacola Pass.

Looking for a special occasion to visit The Emerald Coast? We found that the area is chocked-full of events. For instance, Pensacola has everything from the Fiesta of Five Flags, to the Great Gulf Coast Art Festival to the Interstate Mullet Toss.

At Destin, we were drawn to visit the 30A Songwriters Festival. But there’s also the Destin Seafood Festival, and the annual Camilla Festival. And Panama City Beach hosts the Gulf Coast Jam, The Highland Games and The Pirates of the High Seas Fest.

There are several areas of the Sunshine State we have not had an opportunity to visit. That is our mistake. One of our biggest New Year’s resolutions is to get to some of the places we have not yet visited and the Emerald Coast is at the top of that list.