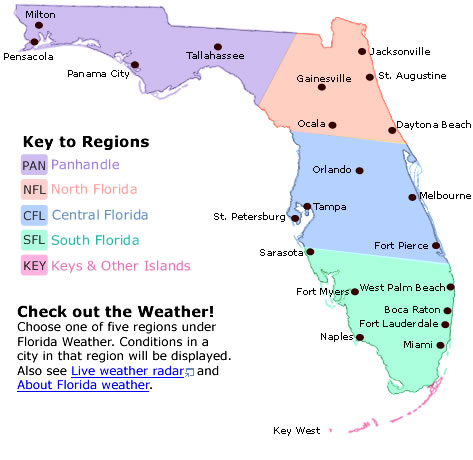 Florida is many different vacation regions rolled into a single state. From the Redneck Riviera of the Panhandle to the Conch Republic of the Keys there is a mix of tropical beaches and inland natural areas that is unmatched anywhere else in the United States.

During our travels, we have visited virtually every area and our reviews reflect this. Some of them will encompass more than one designation. For Instance, Fort Myers both is Central Florida and the Lee Island Coast. That means you might see some of the articles in more than one place.

Regardless of whether you are planning a trip to Florida, or a resident who’s just traveling the Sunshine State, we hope this section will help you decide where to go and what to see.

The Panhandle stretches from Pensacola 200 miles eastward to a line midway between Tallahassee and Gainsville. The Gulf areas include famous vacation regions like The Emerald Coast, The Forgotten Coast and part of the Nature Coast. It includes Panama City Beach, Mariana, Fort Walton Beach, Apalachicola and Destin among others.

There are folks who feel that the Panhandle reflects more hospitality and conservative values. Then of course, there’s Tallahassee. The state capital retains a great deal of that Southern charm, But it also contains pockets of the progressive, creative atmosphere typical of college towns.

North Florida runs roughly from Just south of Ocala to Daytona. It then goes north all the way to the Georgia line. This includes Gainsville, St. Augustine and Jacksonville. We found that like the Panhandle, it is more akin to the Deep South in culture. Much of North Florida is rural and is not as metropolitan as parts of Central or South Florida, with the major exceptions of the metropolitan areas,

In truth, North Florida is known more for magnolias and live oaks than palm trees and beaches. Nevertheless, the area is home to The First Coast and the Surf Coast on the Atlantic side, and the balance of the Nature Coast on the Gulf Side.

Central Florida picks up south of Ocala, then runs south to a line between Sarasota and Fort Pierce. This includes the Tampa Bay and Orlando areas. Most people think of the major theme parks such as Bush Gardens,  Sea World, Universal Studios and Disneyworld when they think of this area of the state.

That being said, Central Florida is home to the Suncoast and the Culture Coast vacation regions on the Gulf side, As well as the Space Coast and Treasure Coast on the Atlantic side. Central Florida also is home to many natural springs. Many have been incorporated into state parks. The springs are great during the summer, because the water stays at a constant 72 degrees. The water is perfect for cooling off. Many visitors also go to the springs to boat and to spot manatees and alligators.

South Florida’s vacation region runs from just South of Sarasota, around the tip of the state, then back north of Palm Beach. It includes the Fort Myers, Naples, Miami, Fort Lauderdale, Boca Raton and West Palm Beach among the metropolitan areas. The sprawling Everglades also is part of the region.
On the Gulf side it’s The Lee Island Coast  and Paradise Coast and The Gold Coast on the Atlantic side.

The Keys is the island chain at the southernmost tip of the state. Stretching about 120 miles between the Atlantic Ocean and Gulf of Mexico. The Keys are known as a destination for fishing, boating, snorkeling and scuba diving. It also is known as “The Diving Capital of the World.”

The island chain’s first and longest island, is about a 60-minute drive from Miami International Airport. Key Largo is bordered on the west by Florida Bay and the Everglades National Park backcountry, and to the east by the Atlantic Ocean, home to the clear waters of the Gulf Stream. The southernmost city of Key West is famous for Duval Street’s many bars, Mallory Square’s nightly Sunset Celebration and the Ernest Hemingway Home and Museum.

We also recommend The 12 Coasts of Florida to help you plan your visit.