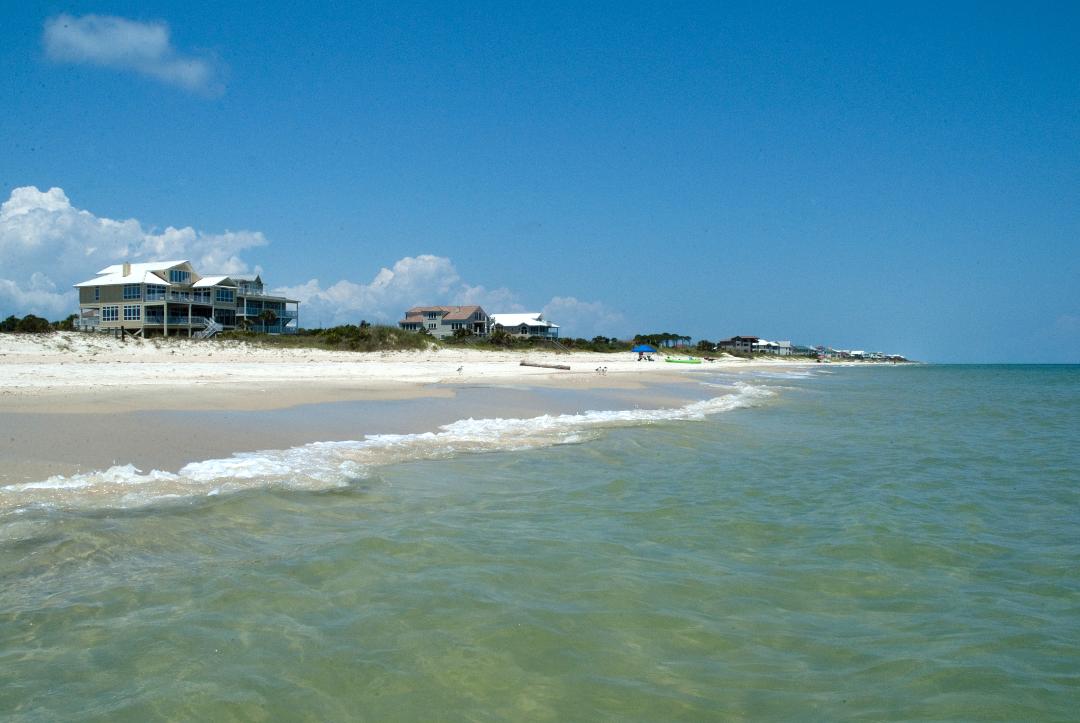 We’re told that “Florida’s Forgotten Coast” is billed as “the last remaining stretch of unspoiled, pristine Gulf Coast beaches that haven’t been overrun by high rises and strip malls.” To us, it’s one of the more interesting Coasts of Florida.

Florida’s Forgotten Coast encompasses that small notch of coastline at the top of the Big Bend area stretching from Mexico Beach to Alligator Point at the end of St. George Sound.

It is the home to both the St. Joseph’s Bay Aquatic Preserve and Buffer Preserve Center – located across from Port St. Joe itself. It then turns the corner at St. Vincent Sound, runs past St. Vincent Island to Apalachicola Bay, It then heads through to St. George Island and finally to Dog Island.

How It Became Forgotten

The name for this coast of Florida was coined in the early 1990s by the Apalachicola Bay Chamber of Commerce. As the story goes, they developed the name after a group of tourism employees forgot to add information on the region to their brochure about the Sunshine State.

Not An Urban Center

Really, there are no major cities along The Forgotten Coast. However, you will find hamlets like Panacea, Carrabelle, Lanark Village, Cape San Blas and Port St. Joe. The adventurous might find themselves on Dog Island, St. George Island or St. Vincent Island.

We learned a lot of them have interesting stories.

For instance we’re told, Panacea originally was known as Smith Springs. At least it was until 1893. That’s when some Bostonians purchased the land about the five springs and renamed the town after a goddess of universal remedy. Apparently it was due to what they believed were curative properties of the waters

Cape San Blas was home to a saltworks. Apparently they produced 150 bushels of salt a day by evaporation of seawater. However, that all came to a halt in 1862 when a landing party from a Union ship destroyed the operation.

Port St. Joe, was established in 1835 as Port St Joseph but was mostly abandoned in 1841 following a yellow fever epidemic.What was left was devastated in 1844 by a hurricane. It was re-established some 50 years later with the advent of the Apalachicola Northern Railroad, but took on the truncated name of “Port St. Joe.”

All of these cities and more were devastated in 2018 by a Category 5 Hurricane dubbed “Michael.”

Plenty of Flora and Fauna

There’s much preserved land along the Forgotten Coast. It starts with the 600,000 acre Apalachicola National Forest. It’s the largest in the Sunshine State. But there’s also the Apalachicola River Wildlife Area. That’s another 63,000 acres waiting to be explored. Tate’s Hell State Forest (aka Tate’s Hell Swamp) which is famous for its waterways where folks may canoe or kayak. Or you might try the St. Joseph Bay State Buffer Preserve Center. It boasts a wonderful trail system and is home to no fewer than 19 known archaeological and historical sites. They date from prehistoric times to the 20th century.

Like the neighboring Emerald and Nature coasts, Florida’s Forgotten Coast has white beaches and blue water – 250 miles in fact. There are Gulf beaches with miles of gently rolling surf, bay beaches with nature and privacy as well as beaches that are perfect for families.

Additionally, you may find beaches that are great for fishing, beaches you can drive to and beaches you’ll need a boat to enjoy. Each seems to be beautiful and unique.

The Forgotten Coast is famous for seafood – most notably the Apalachicola Bay Oysters. Let it be said, we don’t do seafood. We get asked why we want to go to restaurants on the coast. The answer is, we love the Gulf and the Ocean – we just don’t eat what’s in them.

All that being said, the Apalachicola Bay Oysters are a much sought-after delight. Once known as “The Oyster Capital of the World,” between an oil spill, development and a hurricane, the industry has had its problems over the past decade.

The Florida Panhandle’s famous oysters aren’t quite as prevalent as they once were. That said, Apalachicola Oysters still can be found on menus along the Gulf Coast, especially right around St. George Island. Oyster boats bring in fresh stocks almost daily, so you can be sure your meal is truly from sea to table.

Additionally, there are three major types of shrimp harvested from the waters in and around Apalachicola Bay: white, brown and pink shrimp. Apalachicola Bay shrimpers average more than a million pounds per year, nearly 20% of the state’s shrimp supply.