Home Our Travels The Epiphany Experience in Tarpon Springs 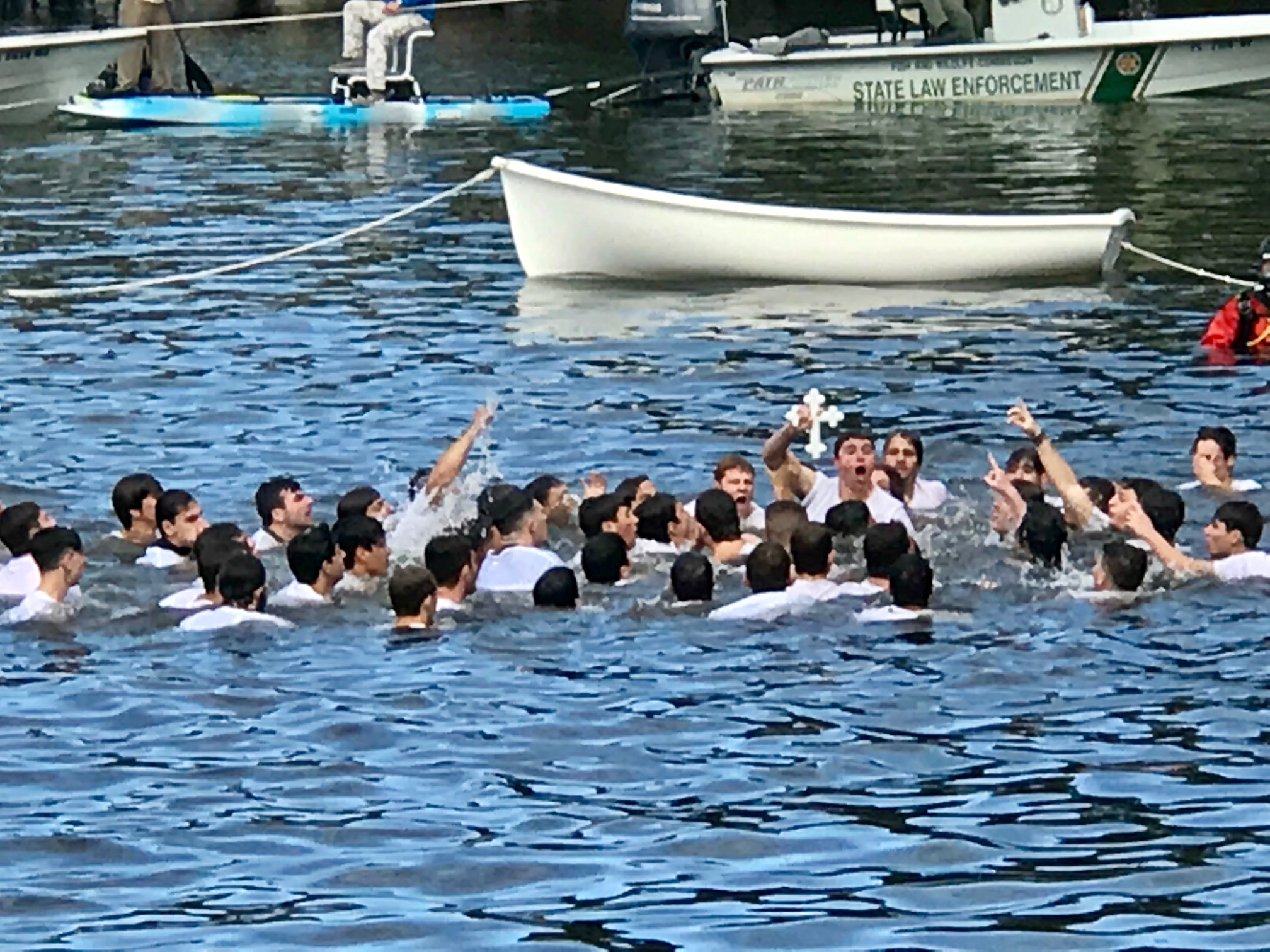 It is in January where the Florida community of Tarpon Springs takes on the nickname of “Epiphany City” and with good reason. This year an estimated 20,000 people came in for an array of activities staged by the St. Nicholas Greek Orthodox Cathedral as part of the annual observance, which culminates with the ceremonial retrieval of a small wooden cross from the waters of the Spring Bayou.
Orthodox Christians celebrate Epiphany on January 6th of each year in remembrance of the baptism of Jesus Christ in the waters of Jordan River more than 2000 years ago.
In 1906, the Greek community in Tarpon Springs decided that Epiphany – or “Cross Day”- each year would be celebrated with the sanctification of the waters and the immersion of the cross in the Spring Bayou.
The activities now actually begin the day before Epiphany, with a Blessing of the fleet and the Sponge Docks on January 5.
It is held at the entrance to the Sponge Exchange on the Anclote River which feeds into the Gulf of Mexico and began this year with the gathering and a briefing for 57 young men who would be diving the next day in the Casting of the Cross observance.
They gathered on a boat to hear instructions and a special address from the oldest living cross retriever, Hercules Ypsilantis – who retrieved the cross at the Epiphany observance of 1949.
The hopefuls then received a special blessing from Father Sampson Kasapakis. Each then was sprinkled with holy water from a sprig of Holy Basil.
The group then moved to the docks, where a special memorial was held for divers, sailors and others who since have passed away. This year marked the first time ever for such an event, with Father Kasapakis reading the blessing, then lighting incense. The divers ringed the memorial table, complete with Koliva cakes, lighting candles and offering hymns.

Koliva is a boiled wheat cake made with such things as powdered sugar, almonds, ground walnuts, sesame seeds, cinnamon, pomegranate seeds, raisins, anise and parsley. It generally is made for funerals and memorials, typically on Saturdays of the Souls as well as to mark anniversaries of deaths.
Following the ceremony, Father Kasapakis and other members of the clergy moved down the docks to bless an array of boats, including sponge boats, tour boats, fishing boats and recreational craft.

After that, the group moved throughout the sponge exchange, offering blessings to the businesses there which lasted well into the afternoon.
Saturday morning, events began in earnest at the St. Nicholas Greek Orthodox Cathedral with the Orthos and Divine Liturgy. At noon, the waters were blessed at the cathedral, and a processional moved from the church to the edge of the Spring Bayou for the culmination of events.
Hierarchs, clergy, dignitaries and thousands of faithful onlookers formed the impressive procession to Spring Bayou, led by altar boys, school children in traditional costumes, choir members and Greek Folk dance groups – some from as far away as New York.
This year, the procession was led by Dove Bearer Kiersten Spanos.
As part of the tradition, the dove bearer carries a dove, which is released just prior to the casting of the cross into Spring Bayou. It represents the Biblical scripture where the Holy Spirit descends on Christ following His baptism “like a dove.”
Tens of thousands of the faithful gathered around Spring Bayou for the annual event beginning early in the morning. Christians, onlookers and members of the media staked out their locations for the best seat.
Some observers came in by boat, there also was a helicopter overhead and even a drone buzzed the area taking shots.
The church service was broadcast from the Cathedral through loud speakers so the crowd around the bayou could hear the ceremonies in real time. The small boats from which the young men will dive, were roped in a semi-circle around the platform, and scuba divers and others used the opportunity to set up safety and other operations.
Wildlife also permeated the area, with seagulls and pelicans in lazily circling in the air and a number of manatee raising their heads from the bayou’s water while the liturgy continued.
The water level was down several feet this year, the apparent victim of a full moon, which had pulled out the tide. The breeze was stiff, unfurling the American and Greek flags on the poles across from the podium area.
A roar came from the crowd as the divers appeared from the processional. They then gathered on the steps to receive their final blessing before hitting the water. After the young men had swum to their respective boats for diving, the clergy blessed the bayou by sprinkling holy water into it.

Spanos then released the dove, which soared into the air, and it was time for the casting of the cross.
The yearly mad scramble ensued, with 18-year-old Christian Chrysakis, as this year’s cross retriever – replicating the action of his great-grandfather, who had retrieved the cross from the same bayou more than a half century ago.
Despite chilly temperatures, church officials said they were well satisfied with the events, and the ensuing party – called a Glendi – which celebrated the observance.
We have noted before, that one needs no special occasion to visit Tarpon Springs, but when it comes to occasions – none is more special there than Epiphany.
Please follow and like us: