The Monument of States is Quirky and Fun - Florida Fun Travel 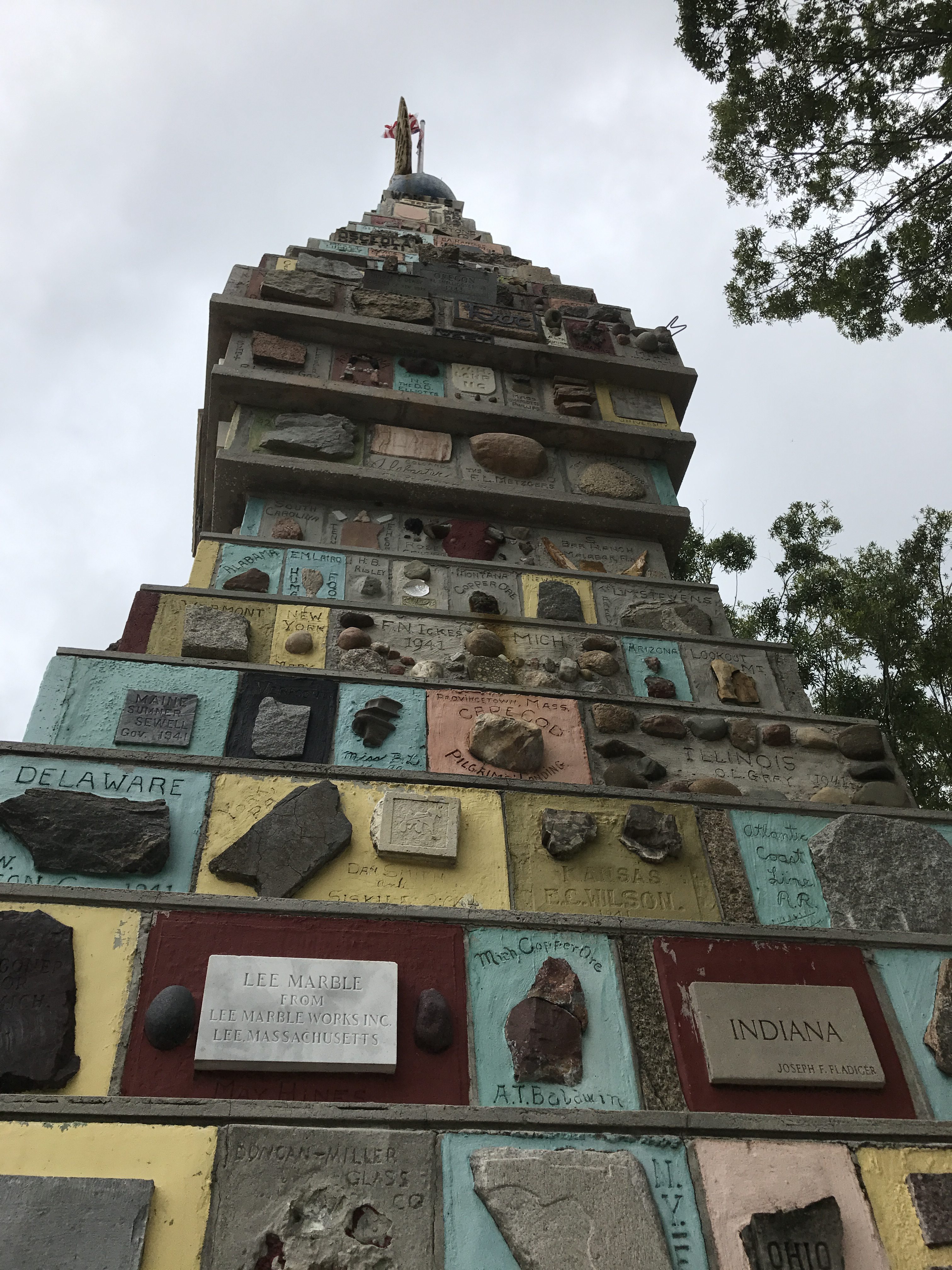 Those who follow us here at Florida Fun Travel are always in search of the quirky and interesting, So when we were tipped to the Monument of the States in Kissimmee, we decided to stop by and visit this great piece of Americana.

On a recent trip to Osceola County – we found it a short detour up Monument Avenue to Lakefront Park. That is where we found the self-proclaimed “World’s Most Unique Monument” – The Monument of the States.

We were told that it began back in 1942 after the sneak attack on Pearl Harbor. The giant pylon was the vision of Dr. Charles Bressler-Pettis. At the time, he was the president of the All-States Tourist Club. The idea was to create a physical symbol of American solidarity as well as a way to draw tourists to his town.

As we read the history, it appears the enterprising Dr Bressler-Pettis sat down and wrote letters to the governors of each of the then-48 states to send him local rocks. His vision was to cobble them together and build a Monument of the States.

And come they did.

In fact more than 500 pieces arrived on his doorstep. They came in a variety of formats. There were blocks of native granite, chunks of quartz, small boulders, fossils, hunks of old buildings – even President Franklin D. Roosevelt sent a rock from his Hyde Park estate.

By 1943 the Doctor had a complete set from across the country. Reportedly he took the pile and had them put into blocks, inscribed with what each one was and mortared into a 50-foot obelisk of multi-colored concrete slabs.

How It Was Built

The monument was constructed entirely by volunteer labor. Reportedly, by members of the senior citizens of the travel club. The 50-foot tall pile weighs in at a reported 100,000 pounds and boasts three and a half tons of steel rails. It was dedicated as The Monument of the States on March 28, 1943.

In addition to the contributions donated by the states, Dr. Pettis reportedly added hundreds of additional rocks he and his wife had collected over years of vacations. On the peak of the monument he sculpted the words “Tourist Paradise” and had it set underneath a concrete planet Earth. The entire pillar is topped with a concrete bald eagle over which flies an American flag.

When we got there, we found that it takes a while to see the whole thing. In fact we had to do some zooming in on our phone cameras to see some of the higher entries on the pylon in detail.

One of the coolest parts, we thought, was that the creator now is part of the monument. When he died in 1954, some of Dr. Pettis’ remains were interred with the other 1,500 stones and objects on the pylon. But it wasn’t finished. After his death the monument continued to grow. Rocks from Alaska, Hawaii and from 21 foreign countries since have been added to the surrounding walkways,

In 2001, an automobile association and a hotel chain rallied local employees to give the weathered Monument a facelift. It came complete with a new flag and a fresh coat of paint on some of the slabs. Two years ago it was added to the National Register of Historic Places.

For more events and other Florida travel items – visit our Florida Fun Zone Facebook page or drop us a line at floridafuntravel@yahoo.com.