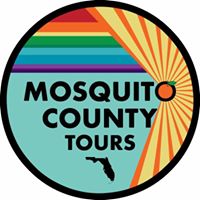 Mosquito County Tours is a business that is going places. We blogged in the past about Mandy Longo’s creation when we first discovered it. Since that time we have tried to make a weekend where we could get together and try a tour for ourselves.

Earlier this month, the Moon was in the Seventh House and Jupiter aligned with Mars and we finally were able to put it together. It was a beautiful thing.

In all, there are six different tours available. We actually got a double, as we took the “Combo Tour” which was the Historic Downtown Walking Tour and the Lake Eola Walking tour. What was scheduled as four hours, morphed into five and whetted our appetite for more.

Longo began the service, doing historic tours as a monthly feature for the Orlando Main Street organization. It was so well received she branched out and started doing tours of her own. From there it has become a business that has shown literally thousands of people from all over the world that The City Beautiful is a whole lot more than just theme parks.

In addition to the tours we took, there’s the “Little Vietnam Food & Art” tour, the “Craft Cocktail” tour, the “Barley Row Craft Beer” tour and the “Historic Winter Park” tour. There also are provisions for private and custom tours for those who wish.

Not being tour-takers ourselves, we were not sure what to expect. That said, it was better than we could possibly have anticipated. Beginning at The History Center, Mandy began with a brief history of Florida in general and Orlando specifically, to set the stage for what was to come.

We walked to sites such as The Cathedral Church of St. Luke, the former Rutland’s building,. The Rose building, the Angebuilt Hotel, the Beacham Theatre, the Tinker Building and the Hand Furniture Store and Funeral Parlor (yes).

The downtown Orlando tour is packed with many different kinds of architecture and historical facts. Mandy brings with her a small notebook of vintage photographs of the different buildings, showing their varied facades over the years and explaining how they “developed.”

Even more interesting than the architecture are the historic anecdotes she shares. mysteries of some of the buildings and stories she has learned that only tour attendees get to hear. We could tell you about the Beacham Theater, however, we have been sworn to secrecy.

One of the highlights of the walk for us was our visit to Church Street Station. Once a bustling emporium surrounded by a complex of bars, restaurants and clubs. the area – like much of Orlando – has evolved. It is now an area of offices by day and with a nightlife so vibrant they block off some of the streets.

The huge and ornate Cheyenne Saloon still stands, but it was closed for a private shoot the day we were there. Mandy also showed us the
“Bumby Block,” and told the story of “The Two Henrys – Flagler and Plant.” Their railroad rivalry proved to be a huge boon for Orlando.

We then moved into the downtown area again to see even more interesting buildings and learn yet more history. Mandy helps draw members of the tour in, by asking riddles and interesting questions. She is not shy about giving clues and many times the answers are as controversial as they are obvious.

It wasn’t long before we were back at The History Center and we were done. It ends at the actual center of Orlando, where you can stand smack dab in the geographic middle of The City Beautiful.

The long and the short of it, is that if you enjoy history, mysteries, architecture and fun. This is a walking tour that is enjoyable and goes extremely quickly for the two hours that’s budgeted.

Mandy is very good at making sure everyone is entertained and is well looked after. When there are places for water or lavatories, she stops and asks if anyone needs refreshments or facilities.

Of course, we took the combo package, so we also got the Lake Eola Walking Tour. After taking turns standing at the epicenter of Orlando, we headed to the water. The first thing you see is the beautiful Lake Eola Fountain, right in the middle of the lake (sort of).

When we were there, almost all the Swan Boats had been rented and were paddling merrily around the water. We then had a chance to see The Muse of Discovery. As legend has it, if you sit in her hand and are very quiet – she will talk to you.

By this time we were getting hungry. Not a problem. We were just steps away from the Relax Grill, where we stopped for lunch and yet more conversation. We learned that the bandshell there actually is entitled the “Walt Disney Amphitheater,” although most simply call it “the bandshell.”

We learned about the swans that populate the lake and how the property was originally owned by Jacob Summerlin – aka, “The Cattle King of Orlando.” We also learned the interesting tale of how it got its name.

Lake Eola Park is populated with all manner of different birds as well as varied pieces of art. Mandy took time to show each piece, tell how it was created and put into place, and yes – pose some interesting riddles.

Before heading back, we ventured into the edge of Thornton Park for a visit to the Pop Parlour. This is the home of all-natural, handcrafted popsicles. It was the perfect choice on a hot July day. They are handmade on site, with pure water fruit and other ingredients.

There actually are three categories of pops; fruity, creamy and boozy. The selections under each of these categories are manifest. In the end, I had the Mango Peach, while Mrs. Funmeister had the Green Tea.

They are, indeed, superior refreshment.

We wound up the tour strolling the back half of the nearly mile-long loop around the lake, looking at birds, fountains and finally ending up at a large piece of black marble from the mountains of Hua-Lien. It was sent as a gift to Orlando from their sister city of Tainan.

It would is difficult to put into words how much we enjoyed this visit. Mandy has given us a whole new perspective on tours. Her research and presentation was inspiring. If you are headed for Orlando, we suggest that you contact the Mosquito County Tours web page or Facebook Page and take one of their trips around The City Beautiful.

And stay tuned, there’s another big announcement – but we have been sworn to secrecy.

Additional information may be had by contacting mandy@mosquitocountytours.com