Home Our Travels The Beaches of Manasota Key 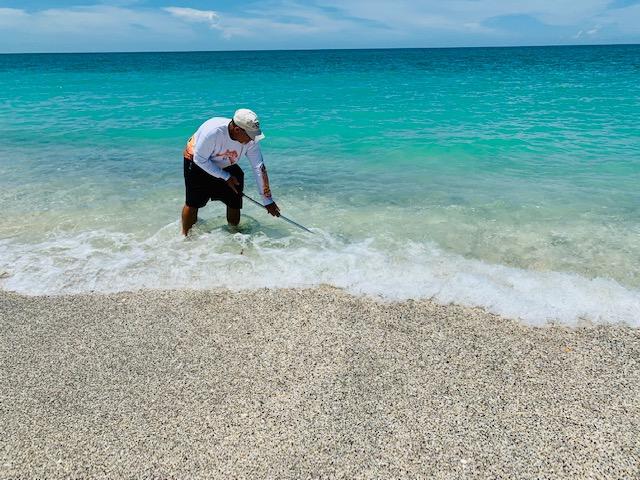 Over the course of our travels, we’ve found the beaches of the Suncoast are difficult to beat. From Fort Myers to Sarasota there’s a nearly continuous stretch of white sand and blue water. The beaches are teeming with shells, sharks teeth, fun and sun.

On a recent trip, we decided to work our way up Manasota Key. Starting at Englewood Beach, we drove up North Beach Road. (At some point it magically transforms into Manasota Key Road.) We finished up at Manasota Key Beach.

It is a more than pleasant drive. This is a two lane roadway dotted with private homes, condominiums and Bed & Breakfasts. In many places it becomes a canopy road, making the beach-hopping that much more pleasant.

Our first stop, Englewood Beach, boasts all the amenities. Parking is paid but there’s a lot to do. There are changing rooms with showers and washrooms. There are areas for grilling, picnic tables, a covered playground, plus horse shoe pits, volleyball nets and basket ball hoops.

. A couple of independent vendors also set up there – including the VW Microbus of Senior Smooth.

Englewood Beach itself is wonderful. It is not very steep, which makes it easy for walking. We saw a lot of folks who had set up for the day. Some even had bean bag toss games set up and were engaged in friendly competition.

On the water we saw plenty of jet skis ramming about and a parasailer passed lazily by as we walked.

Just up the road was Blind Pass Beach. From the street, one would think there wasn’t much there. The parking lot was free, it was mostly a dirt field marked only by wooden fencing. The lot was very full when we arrived. After finally putting the funmobile in a vacant spot, we ventured across the street to check out the waterfront.

Like Englewood Beach, it had bathroom facilities – but not much else. There was no playground, no covered picnic areas nor vendors. But the white beach and blue water remained a constant.

A lot more people populated the beach, and many were intent on finding shells. We learned the area indeed is a hot spot for shells and a treasure trove for those seeking shark’s teeth. One searcher had a shell shovel (aka sand flea rake.) He first dragged it through the sand, then dumped the contents on the beach. His compatriots then sifted through in search of treasure.

We followed him for quite a way, asking about his methods and what he had – and had not found. In the end, he was kind enough to bestow a few shark’s teeth on us. (They will be headed to the grandchild.)

Like the others, Manasota Key had nice facilities for those planning to stay at the beach. Again, the parking was free and the lot was jammed. Through the grace of God, we got a spot on the front row under a tree.

There were bathroom facilities and picnic areas. Heading down the walkway to the water, we were reminded it was turtle season. Several areas had been blocked off with stakes and tape. Signs were posted saying “Turtle Nests – Do Not Disturb,” We didn’t. However, we did take a photo. Then we went on to enjoy the beach.

There were plenty of swimmers and shellers at Manasota Key. However, we did not see as much motorized traffic. There was one lady on a paddle board that did cruise by as we enjoyed the day.

Again, the blue water and white sand prevailed. It also seemed to be the only one of the three beaches that had a lifeguard shack. Manasota Key Beach is rimmed with tropical foliage and trails. Additionally, there are boat ramps and apparently there’s fishing on the sound side.

This is a wonderfully rewarding trip. We can highly recommend the beaches of Manasota Key to anybody visiting southwest Florida. Moreover, we rewarded ourselves with a quick trip up to Englewood.

There we stopped at one of our favorite eateries, The Mango Bistro. We have blogged about this place in the past. It makes a wonderful reward after a day on the beach.

The Mango Bistro is a wonderful place for a lunch, dinner or snack after exploring the beaches of Manasota Key.