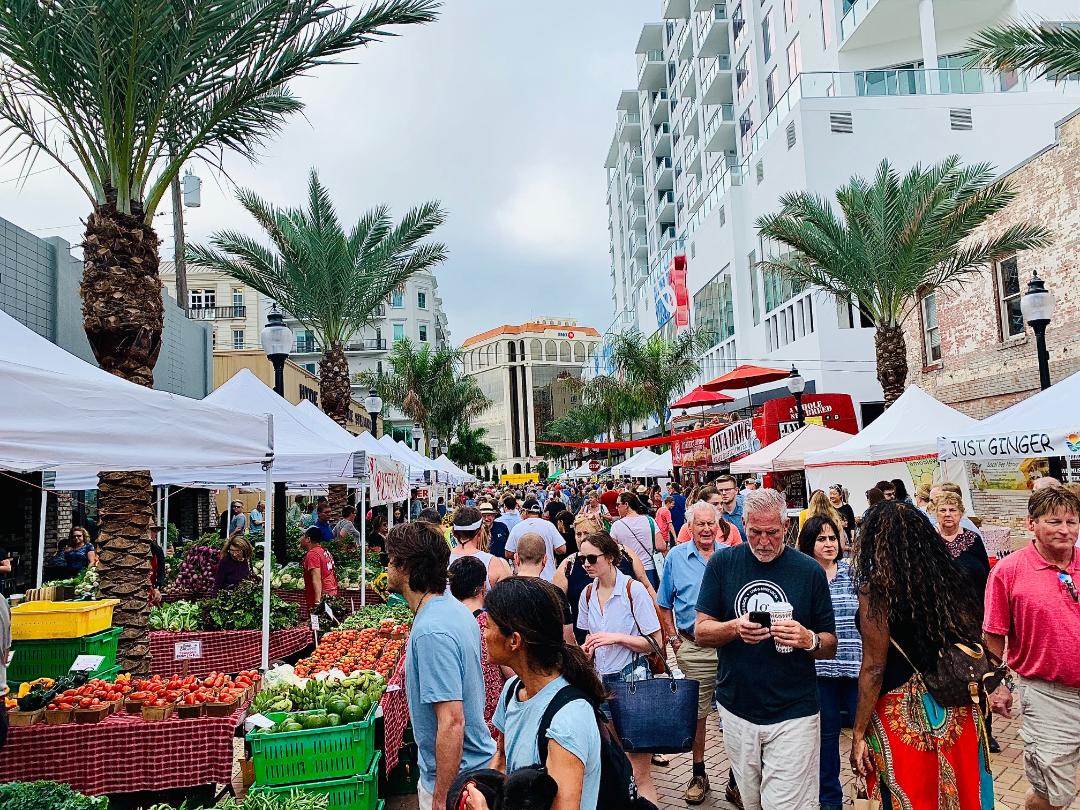 Recently we blogged about our trip to Delray Beach and their Green market. The experience inspired us to go back to the Sarasota Farmers’ Market for what we think is probably the best of its kind in the State of Florida. At 40-years old, it certainly is one of the longest-lived in the Sunshine State.

We have been to the Sarasota Farmers’ Market many times in the past and have both blogged about it and published video.

Despite being a gray day, we were met by a huge crowd that packed Lemon Street for the weekly gathering. The layout had changed a bit since the last time we attended. What stayed the same was a lot of our favorite vendors and an emphasis on organic and sustainable products.

As always, there were dozens of different vendors. Being a farmer’s market we literally had a myriad of produce choices. The best part was that most of it was locally grown.

Our first stop always is at Worden Farm. A staple for us and for the Sarasota Farmers’ Market – their produce is unparalleled. We also tried Wild Side Farms and Tatum Ridge Farms.

Additionally we found herbs, honey, micro-greens, and even a booth called Just Ginger. Mainly, because what they carried was just ginger. The owner told us the hands he had for sale were good either for eating or growing.

But it didn’t stop there. We stopped by Winter Park Honey to sample their fare. There also were wonderful cookies, muffins and scones by the Sift Bakehouse, homemade relishes, jams and jellies from Southern Basket, canned fruits and vegetables at Sunshine Canning, and even probiotic goods. The Golden Goddess Sauerkraut caught our attention at Fermentlicious. It was so good, we bought ourselves a jar.

There was an impressive array of products from Greenleaf Cheese, specialty olive oils by Paneolio and a giant spread at Maggie’s Seafood. But we were particularly intrigued by a vendor with locally harvested sea salt.

Run by Tim Norwood and his wife Janice, Sea Salt Florida is locally harvested from the waters of the Gulf of Mexico. He works the waters from Anna Maria Island down to Venice Beach. While saying most of the information was proprietary, he told us that he “choreographed” the harvesting.

We also were delighted to learn that the methods he uses protects both sea grasses and turtles. It’s more than salt. He told us the products are chock-full of other minerals, all natural, and support a true Florida entrepreneur.

But if you are hungry right now, there’s plenty of ready to eat food at the market. Raw!Raw! was serving up vegan biscuits and vegan sausage gravy. Roverta’s Crazy Crepes was doing a land office business as was The Market Grill. And from the lines, it appeared to us that there was no shortage of customers.

Of course, Perry’s Original Roadside BBQ and Catering was there. Washington Perry was overseeing things smoking his trademark 52-ring sized cigar. Shoppers had their choice of beef, pork, or chicken from the legendary BBQ giant. Perry’s might best be recognized for “the most renowned sauce South of the Border.”

Camelot Breads had their huge supply of tasty baked goods. One of my favorites Kurto’s Chimney Cakes was twisting all manner of treats – ready to be stuffed. Leah’s Lemonade was on hand for cold beverages and one of our favorites, Java-Dawg had their double-decker bus parked in its regular location.

Java-Dawg is known for their locally roasted coffee. But there’s also frappes, cappuccinos, lattes, flavored coffees and espressos for sale – among other treats. But the best part is you can go and sit on top of the bus, relax, enjoy, and people-watch.

We have talked a lot about the food. But amongst the dozens and dozens of vendors there are plenty of other shopping opportunities. There are clothing vendors with everything from dresses to T-shirts. We saw all natural cosmetics, scented soaps, jewelry, candles, artist displays, real Gulf sponges, baskets, and bicycle supplies to name just a few of the booths.

The Sarasota Farmers’ Market is a spectacular opportunity to browse and buy. We found it also is a venue for some world class people-watching. A note of caution, the market is dog-friendly and there are a LOT of people with their dogs at the event. (and some of them are pretty darned BIG).

That being said, it’s free to get in and can provide you with hours of entertainment on a Saturday morning. It is located on Lemon Avenue in Sarasota and runs from 7am until 1pm. Additional information can be found by calling 941-225-9256