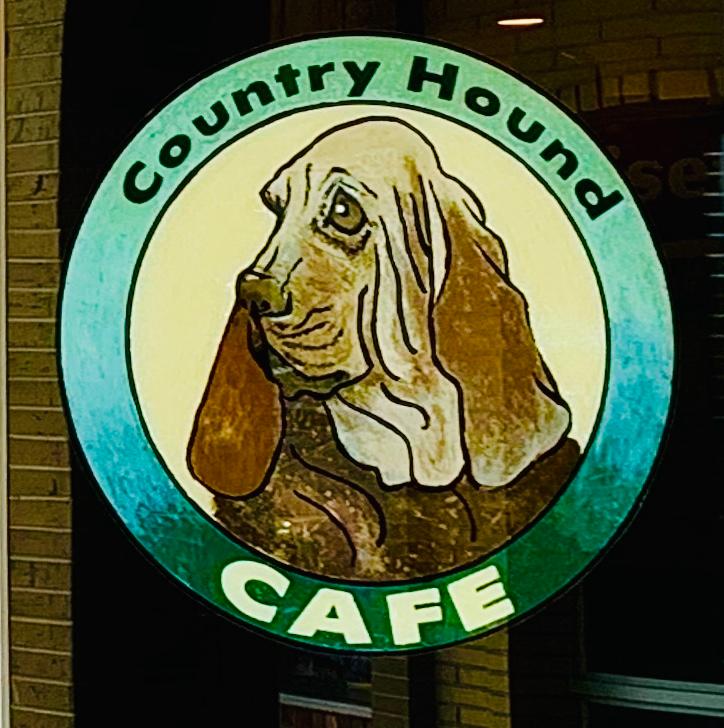 We were headed for Made in the Shade Ice Cream and discovered an Englewood restaurant that’s is a whole lot of fun. The Country Hound Cafe. It’s a mom & pop operation that’s as good as any and better than most.

Tucked in the corner of the Palm Plaza off McCall Road – it’s just up the street from Made in the Shade. Our waitress told us The Country Hound has been in that location for better than a quarter century.

We were greeted at the door by the County Hound himself. Little did we know he was the first of many we were about to see.

Yes, the interior is plastered with hundreds (perhaps thousands) of pictures of dogs. We did not see any photos of famous canines like Lassie, Benji or Rin-Tin-Tin. However, there were framed images of all kinds showing off family pets.

Interestingly enough, where we were sitting we noticed that there were a couple of cat photos. We of course had to ask about this. They told us that yes, a few felines had been scattered about the walls by patrons (both current and former) who found their kitties every bit as wonderful and adorable as their canine counterparts.

The Country Hound Cafe menu is just as interesting as the place itself – and apparently also as old. We were handed a well-worn four page listing of their selections.

To say it is extensive might be understating the case. The first two pages comprise their breakfast menu. There are three egg omelets, skillet breakfasts plus pancakes, waffles and french toast.

We noted steak & eggs, biscuits & gravy, chipped beef on toast – even a breakfast burrito if you like.

The lunch is just as varied, from over-stuffed deli sandwiches to their south of the border specials we could have our pick.

I opted for the over-stuffed New York Style Corned Beef and was not disappointed.

There also are dinner entrees of beef, seafood or chicken. We had options like top sirloin or beef tips & noodles or perhaps lemon pepper or bourbon glazed chicken.

As close to the Gulf as they are, you might want to ask about the Catch of the Day.

We weren’t sure who was on the grill the day we were there. But we did see that The Country Hound cooking team had been a BBQ Competition winner.

The thing we did not see? We saw no dogs inside the Country Hound Cafe.

Those who follow us know this is not the only Englewood restaurant we have enjoyed. The Mango Bistro earned high marks for our visits there

. But if you are looking for a good meal with a fun atmosphere down in Englewood – we also can recommend the Country Hound Cafe.