Home Our Travels An Inaugural Visit to Sanibel 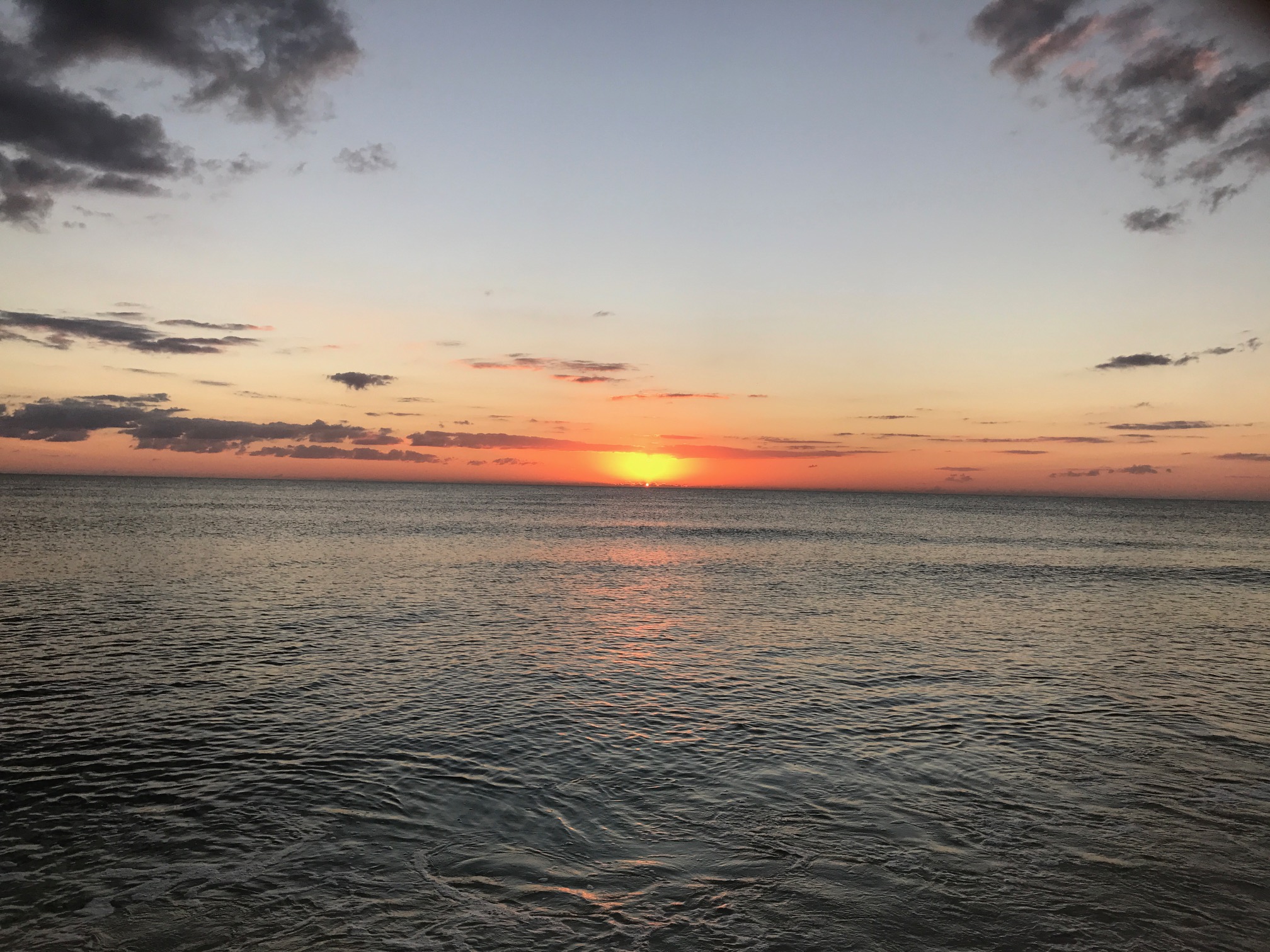 For some time we had heard about the legendary shelling at Sanibel Island but it was not until recently we packed up the Funmobile and headed out to see what the fuss was all about.

Mrs. Funmeister had done the requisite due diligence and found us overnight accommodations at the Castaway Cottages so that we would have a place to lite for the evening.

Crossing the causeway from Fort Myers was a wonderful afternoon experience. There were bright blue waters whipped by a light wind. We had thought about pulling over to get some photos – but there was not a vessel to be seen.

Nevertheless, I made a mental note that we would most certainly stop on the way out and make some Kodak moments at a couple of the strategically-placed parks.

Our first stop on the island was the welcome center at the Chamber of Commerce. It was a great call. Not only was the place well stocked with tri-fold brochures and magazines, there was a full staff of locals who could point us in the right direction for our inaugural trip into Sanibel-Captiva.

We looked at a number of lunch options and decided on The Island Cow, just up the road.  It wasn’t long before my wife (navagatrix on our excursions) informed me, “Honey, it’s up there on the left – see the sign?”

The Island Cow is a truly unique experience. Brightly colored and peppered with cow memorabilia, it reminded me of several places we have been where the restaurant made it’s mark more with the ambience than the fare.

Imagine our surprise when we found out the food actually is the star of the show. Everything we had was fresh, crisp and delicious. I went with Amy’s Corned Beef Sandwich. True to its billing, it indeed was ”two fisted.” The fries also were crispy and not greasy!

She had the chips and salsa. Chips also not greasy and high marks across the board for the queso, salsa and guacamole dips. Her favorite was the salad with real greens and fresh fruit. She was in a good mood the rest of the day.

Molly, our waitress, was very helpful in giving us both a history of the restaurant and more tips for travel around the island.

There’s plenty to do there besides eat, there are photo ops with a cut-out cow, great lounging chairs, live birds and the obligatory souvenir shop.

On the way to our cabin we ran up on the Bailey-Matthews Shell Museum.

“How can we go to Florida’s best shelling beach and not go to the shell museum?” she asked.

A good question, I thought as we wheeled into the parking lot. Whoever would have thought there was enough interest and stock to open a museum to shells and mollusks? Yet there it was and it has been there for better than two decades. 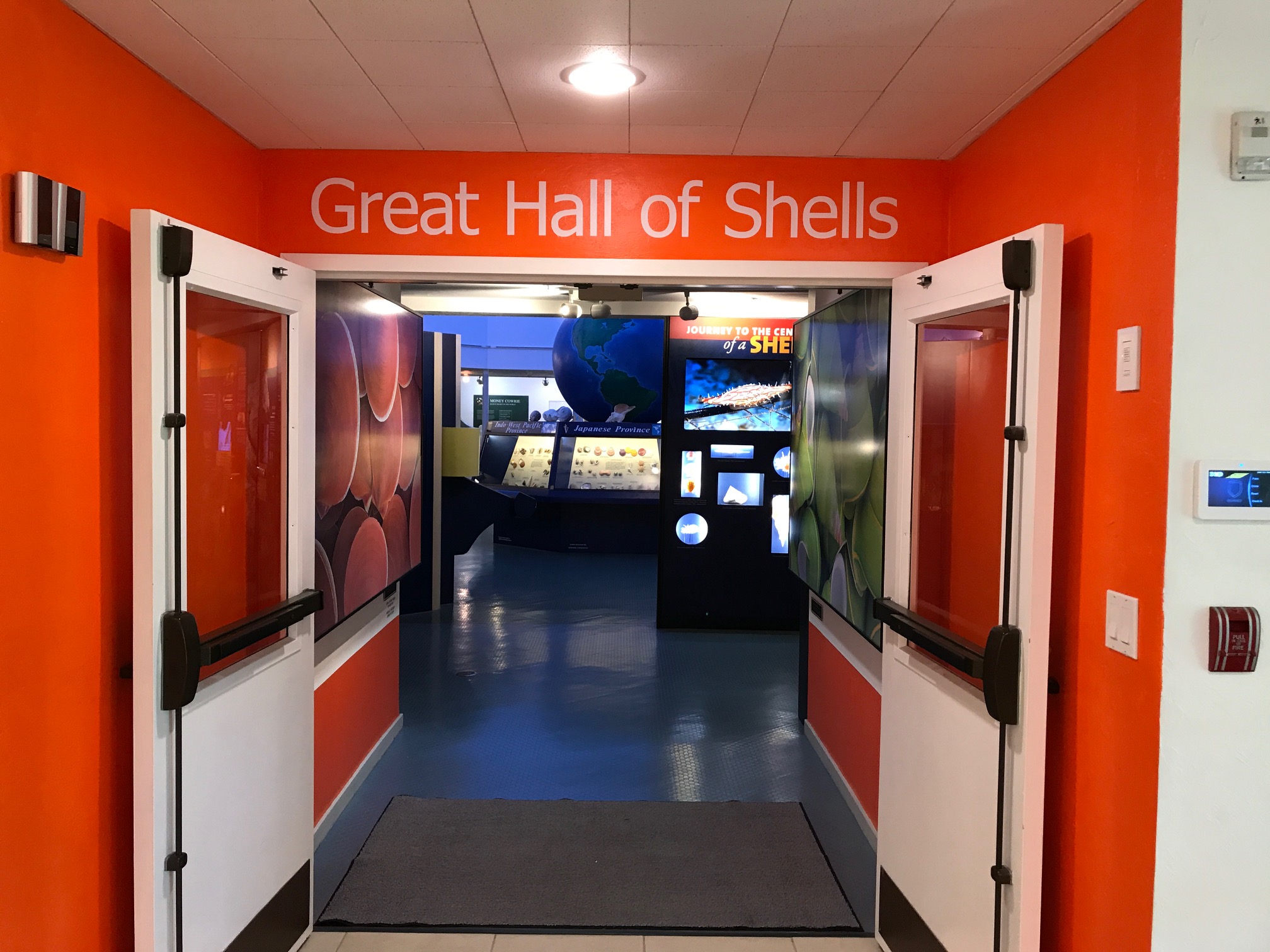 Although we spent most of our time in the gift shop (apparently there is a shell for each birth month in much the same way there are birth stones) – the center of the attraction is the “Great Hall of Shells.”

There are displays of shells broken up geographically, an entire section on scallops, a history of how tribes used shells as money (this did not work at the gift shop), there’s a wonderful little children’s learning center as well as some hands-on exhibits about the properties of shells. Those are just a few of the examples of the things to hold one’s interest inside.

It was amazing that we could spend such a long and productive time looking at and learning about seashells.

Finally we headed out to find our room. It was a surprisingly long drive past the J.N. “Ding” Darling National Wildlife Refuge (closed on Fridays), past homes tucked away along miles of wooded area and out to the north end of the island.

As we passed a Lazy Flamingo location, there was the office of the Castaway Cottages of Sanibel.

This lodging facility actually is a spate of small one, two and 3-bedroom cabins in the old Florida style. They are strewn around the Blind Pass area where “Sanibel meets Captiva,” set with the Gulf to the west, Pine Island Sound to the east. 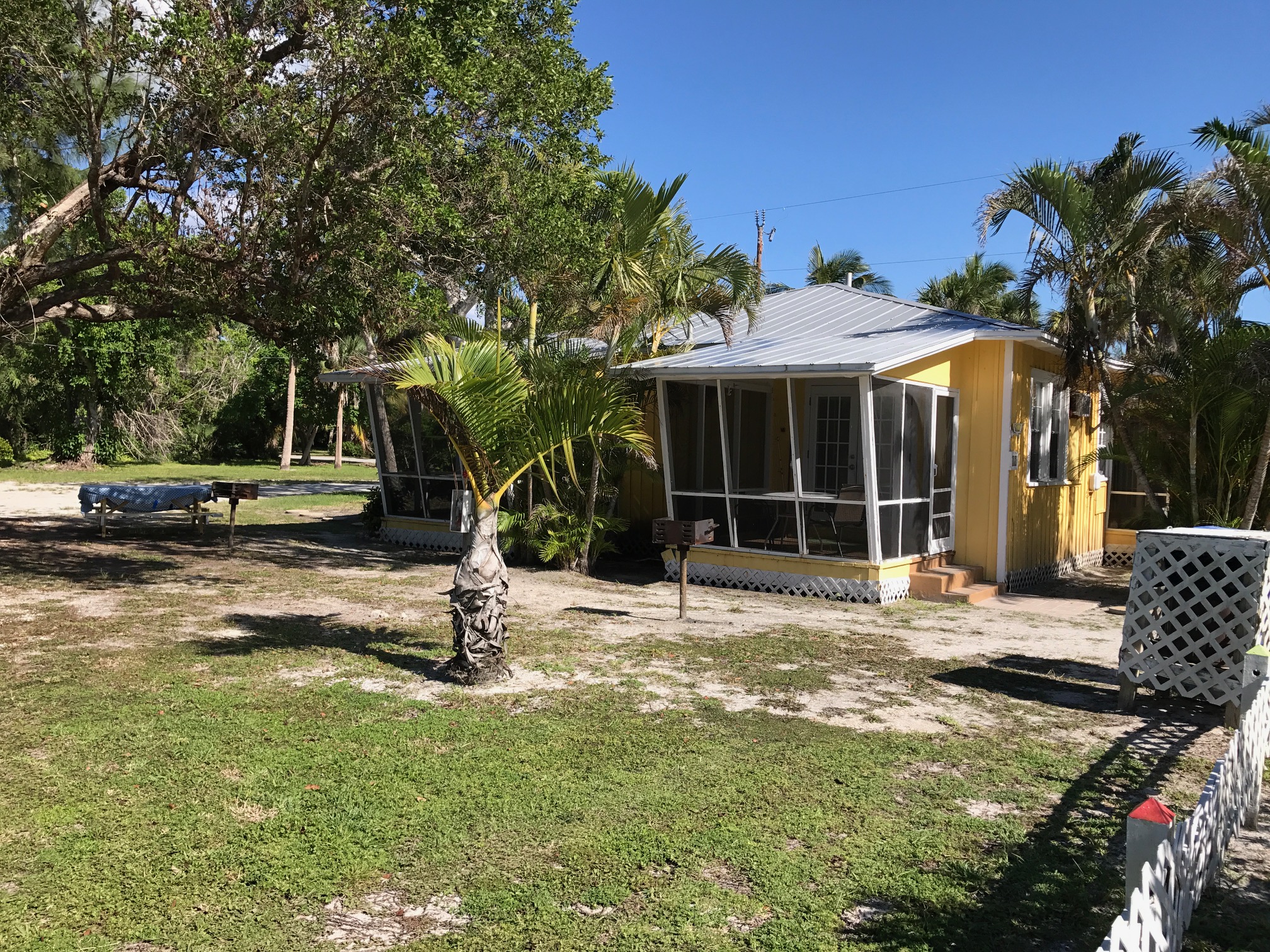 Ours was a simple one-bedroom, sitting just off the dock of the bay.  After unloading and setting up camp, my wife was focused on a single destination – the beach.

The Castaway Cottages complex has a wonderful access to Blind Pass Beach, so with bag in hand we got our toes in the water and headed out in search of shells.

From the get-go she mastered the so-called “Sanibel Stoop” and began raking in a wide variety of different specimens (some were sought as “birth month shells” to be distributed later).

At one point she found a “Lightning Whelk,” which was occupied at the time.  It went back in the water (we had been cautioned about “live shelling.”) 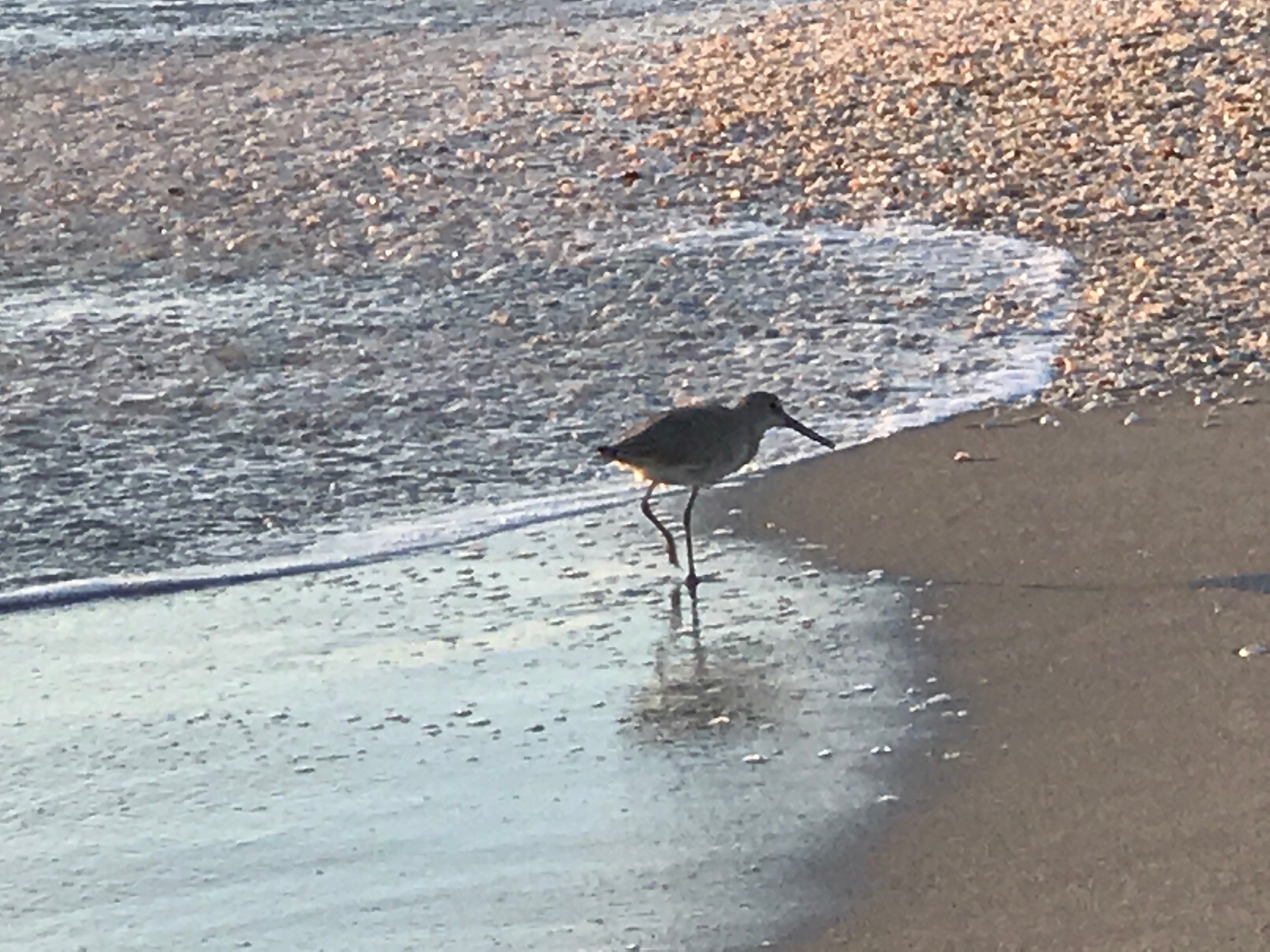 We had a great time looking for shells, walking the beach, watching the shore birds, talking with the fishermen (using both rods and nets) and capped it off with a kiss at the Sanibel sunset.  Actually there were several kisses as I remember.

In Search of Dinner

For dinner we headed further north, across the bridge and onto Captiva – having no idea exactly where we were going.  Finally we heard music and followed it to RC Otters. This was yet another great find.

Self-described as ‘un-fancy American eats,” we chose an outdoor table which was a stone’s throw from a single guitarist singing hits of bands such as “America” and “The Eagles.”

Again, the food was great and reasonably priced. 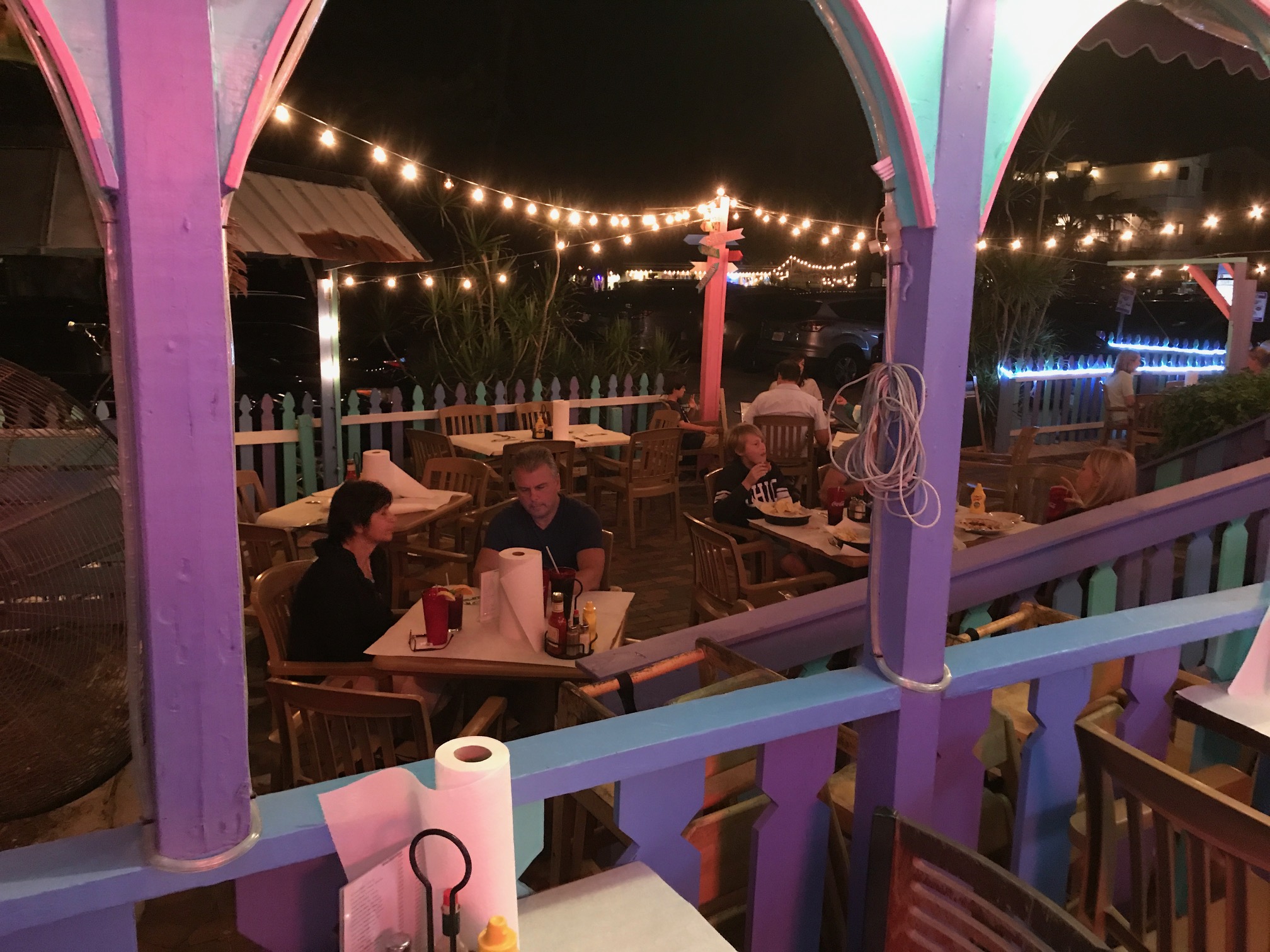 I had the Cheeseburger in Paradise while she had the Reuben. Again, we were blessed with a great waiter, Daniel, who also was very friendly and informative about the island with places to go and things to see.

Just across the way was a place we had heard about and wanted to visit. It is the famous Bubble Room. Like most of the places on the island it is well decorated with it’s own unique decor.

There are antiques, curiosities and nostalgic pieces peppered throughout the three floors and five dining rooms. 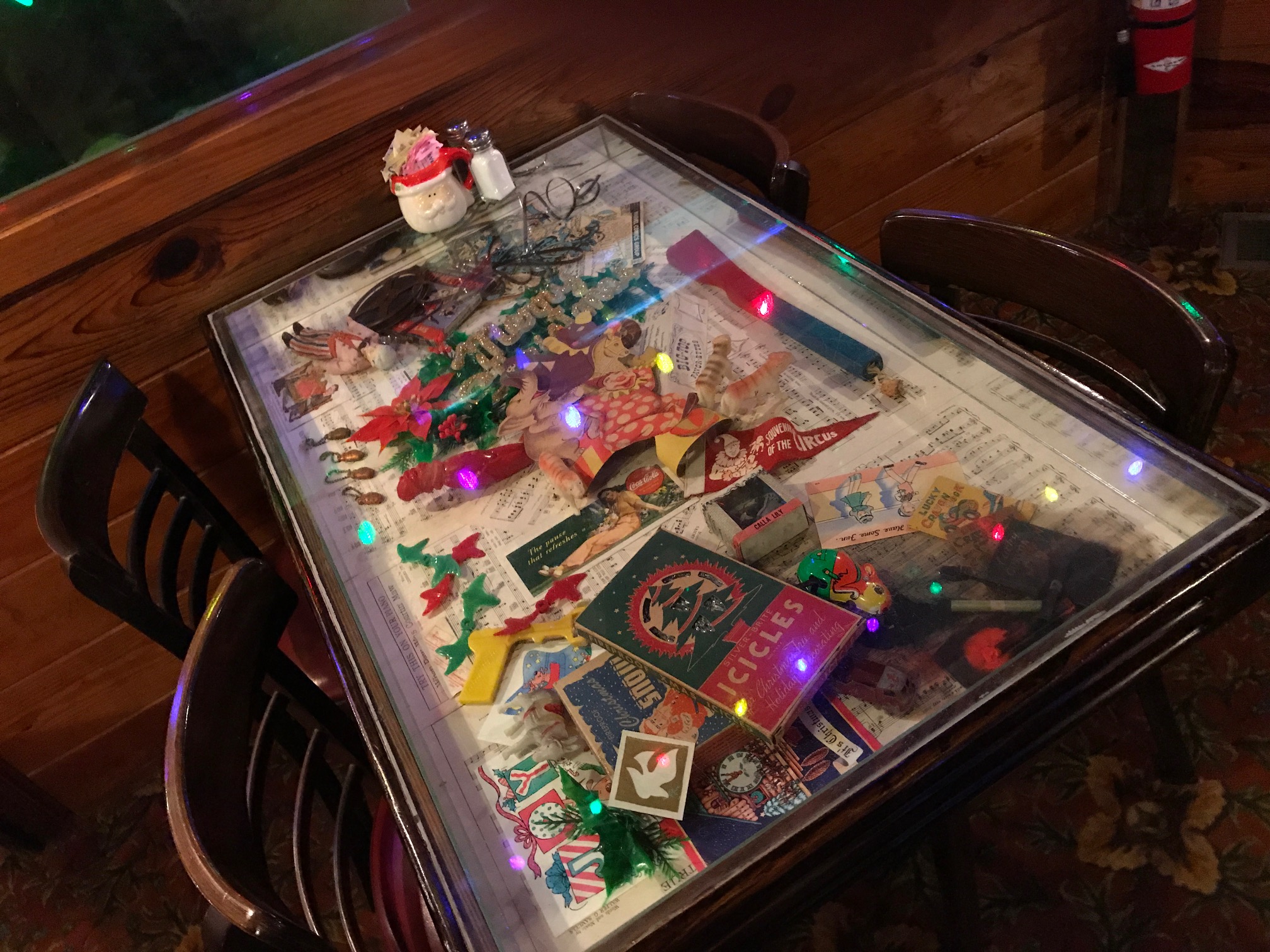 Probably the best seats in the house are on the third floor where there are a pair of plate glass windows that overlook the street.

We, however, were crammed into a second floor room, where the walls were plastered with an array of old movie posters, still pictures and signs from the mid-20th century. The tables are oversized shadow boxes – each with a collection of  small toys and other pieces of the past.

Having eaten dinner, we opted for one of their famous desserts. There was a choice of eight different cakes. We decided to split a huge “Tropical Breeze” – an orange cake with pineapple/cream cheese frosting. It was decadent and wonderful.

Again, diners can spend quite a while viewing the antiques and displays – including an overlook into a vintage depiction of Santa’s workshop.

That was on Friday.

Saturday we had planned to do some more, but it was a gray day and we decided to move on to other weekend obligations.

However, on the way out, we did enjoy a great breakfast at the Over Easy Cafe. It was the only place we had to wait for any appreciable amount of time. Apparently there had been an early-morning a fun run and all the participants had decided to eat there.

We waited our turn and it was worth every second. I had the veggie omelet which was cooked to perfection and featured feta cheese which just lit up the whole dish. My wife had the big breakfast with cranberry pancakes, highlighted by her cranberry-apple herbal tea.

We especially liked the heavy ceramic vanity mugs. While they held a limited amount of coffee, they also held the heat. 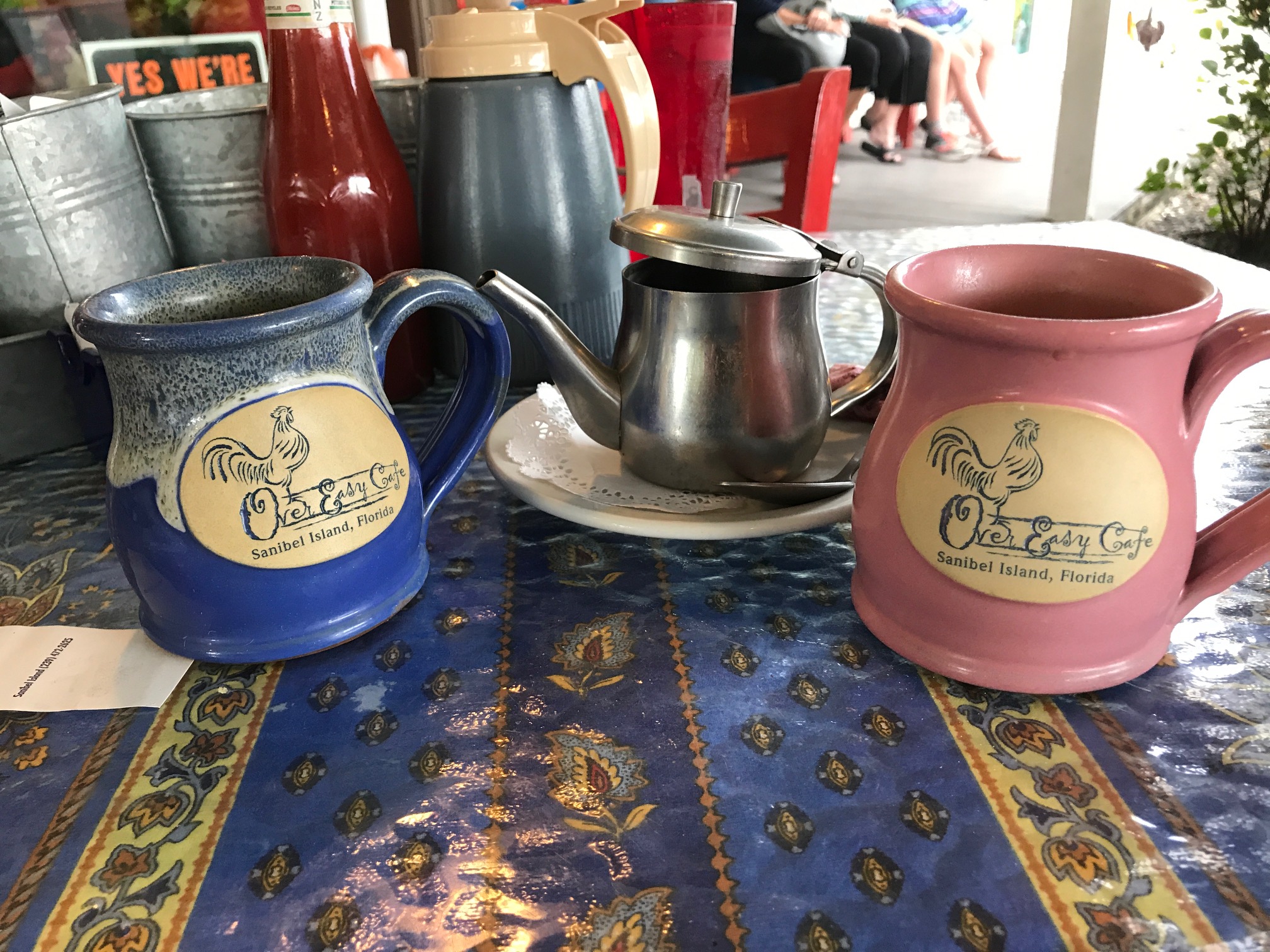 Just before leaving we were told to visit Baileys General Store. We had expected a smallish retro-style operation. Imagine our surprise when we found a huge, full-service grocery store, with a bakery,  coffee bar, a produce section loaded with organics and an adjoining hardware store.

When next we return – it will be for an extended stay, we know where to get just about anything we need – again at market prices.

In retrospect, we found that there were a number of places we would have liked to have explored had there been enough time. We resolved to return and rectify that situation with a more structured plan and itinerary to enjoy ourselves and all Sanibel and Captiva have to offer.

Our trip to Sanibel and Captiva was by far one of the best vacations we have experienced. Have you been? What were your impressions? Visit our Florida Fun Travel Facebook page or drop us a line at floridafuntravel@yahoo.com