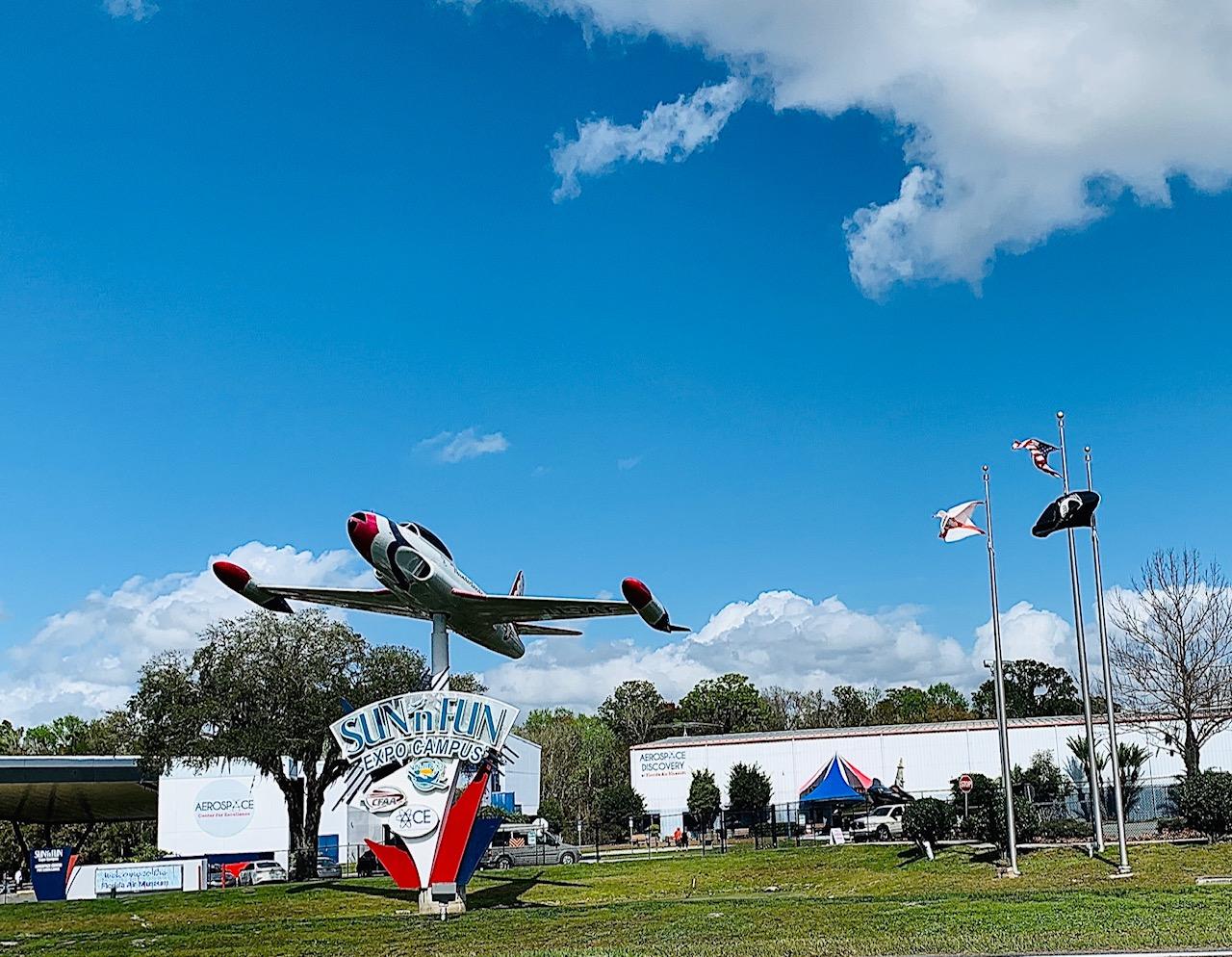 We love to find hidden gems – and The Florida Air Museum certainly is one of those. Tucked in on the grounds of the Lakeland Linder Airport, it is a small complex with a wide array of aircraft.

When you first arrive, you’ll note the area is dotted by many different kinds of aircraft. Jets, propeller-driven craft and even helicopters are parked about the place.

We are big fans of airplanes. In fact, we have blogged about our trip on a Ford Tri-motor aircraft. Additionally, we chronicled Aviation Week in August. In that article we listed three other museums. The Florida Aviation Museum had escaped us up until this trip.

Once inside, we were greeted by a young man named Luke. He took time to give us a map and show us where some of the aircraft were located both inside and out. Apparently, it is a rotating collection, so on each visit you will have the opportunity to see some new exhibits along with some of the permanent displays.

We noted various aircraft parked around the grounds. The inside was packed with an array of planes as well. There were bi-planes and monoplanes. There were exhibits of aircraft and displays of aeronautical memorabilia. For both the aviation enthusiast and the casual observer, we can guarantee hours of things to see and do.

Yes, there are many things to do. There are numerous skill-testing machines. “Can You Land a Plane Without Seeing the Ground”, “How do Airplanes Change Altitude” and “Ever Wonder How an Airplane Turns” are just some of the exhibits where we could apply our skills and knowledge.

Inside the museum several fuselage displays begged for our inspection. We looked into a cockpit of a vintage Eastern Airlines passenger plane in which (very small) people can fit. There’s the cockpit of a MiG-21 jet and a fuselage section of a plane that shows B-17 and B-29 interiors. That one we actually could walk through.

Additionally, wall displays, showcases and even some encased areas drew our attention. There’s one saluting the air corps of Viet Nam, a wall of Air Show Pioneers and Innovators, one dedicated to aircraft pioneer Howard Hughes and an exhibit of different kinds of propulsion from propellers to jet engines.

The Florida Aviation Hall of Fame

One of the most impressive displays we saw is the Florida Aviation Hall of Fame. Inside, we found the names of individuals who have made significant contributions and achievements to civil and/or military aviation and aerospace.

We also learned that Florida actually has its own “Lindburg.” His name is Pete Sones. He worked out of Haines City as an ambassador for Stinson Airplanes. Later he started a number of flying clubs. The most notable was the Florida Flying Alligators Club. Apparently, to join you had to fly at least 100 miles over Florida swampland.

If you have children, there is a corner where they can play. We saw they had placed an instrument panel where youngsters can “fly” a plane to their hearts’ content. On the other side is a large mirror and a box of flying garb the kids can try on and see themselves as future aviators.

There’s also a table and benches where young people can sit and color. We saw a rack with sheets of paper bearing the outlines of planes. Along with them, there are giant boxes of crayons. The outside of the corner is lined with comfortable couches for parents.

There were no youngsters when we were there, but we sat for a while anyway before picking up our tour.

As we said, there are plenty of aircraft set around the building itself. Some of them are fixed in place. Others apparently had been towed or were in the process of being put into their temporary location.

Again, we were intrigued by both the size and the scope of the displays. While we were there we saw a Grumman F-14-D Tomcat and an XFV-1 also known as “The Salmon. That plane was built for vertical take-offs and landings.

We also saw the “Tampa Bay Pacemaker.” It’s a Boeing 727. Luke told us that this is used by the next-door Aerospace Center for Excellence. The plane is used as a learning lab. He told us that it’s the only fully functioning Boeing 727 classroom in the United States.

Parked beside it was the experimental jet plane built by William Gunn. I actually saw it fly one year at the Sun ‘n Fun Fly-in held each year in Lakeland.

We’re here to tell you, a visit to The Florida Air Museum is well worth the trip. Designated as Florida’s “Official Aviation Museum and Education Center,” we found it to be both intriguing and entertaining. We learned so much and actually, could have spent a lot more time there.

The displays are well laid out. They led us easily from place to place providing vast amounts of information disguised as entertainment. We learned the history of aviation. There were displays and information about some of the people who made it happen.

We were treated to air shows and daredevil pilots. Aircraft ranged from lighter-than-air craft to jets. There was an opportunity for some hands on play and to view one-of-a-kind artifacts.

In short, there’s plenty of opportunity to spend some real fun time here.

And finally, a salute to one of our friends. An air show ace, a presenter of wing-walkers an upside down flyer and a truly great guy.