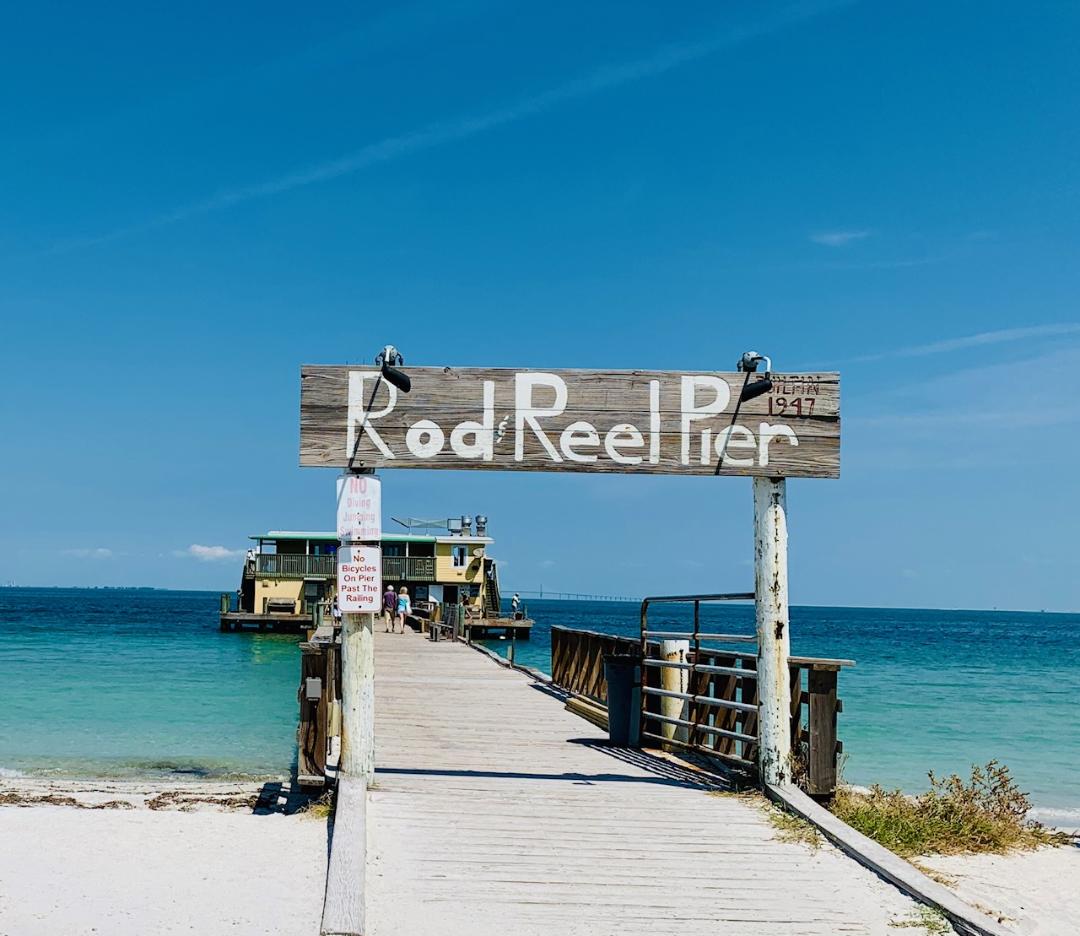 When visiting Anna Maria Island there are certain places you need to visit. Of course there’s shopping on Pine Avenue, a meal at Ginny & Jane E’s and the iconic Rod & Reel Pier.

We found it highly recommended by locals and reviewers on TripAdvisor alike. It is the essence of AMI – that is, a funky atmosphere with a great product.

The Rod & Reel Pier is not much to look at first blush. We were greeted by a hand-painted sign, a shellrock parking lot and a long walk out to the restaurant. As we strolled along, we noticed some of the boards were sturdier than others. Many of the planks also had names and such carved into them.

More than one appeared to have been there for quite some time.

There usually is a boat or two tied up along the way, as many of the folks out cruising the Passage Key Inlet stop by for a bite to eat or to have a drink and enjoy the ambience. Some folks also fish off the pier.

As we approached the place, we could hear it was well populated.

We were hungry, so we immediately headed for the restaurant. Making our way up the gently swaying stairs, we noted they had a couple of options. We could sit outside on the deck and watch the activity on the pier or go inside for a window seat.

We opted for the inside and a window seat Our waitress Adina was quick and took care of us efficiently, despite a good sized crowd.

Being on the Gulf and out on a pier, it’s no wonder they have great seafood. Reviews we read on TripAdvisor bore this out. Some raved “they have the best seafood on the island.” However, although we love the Gulf, we generally don’t eat what is in it.

I opted for the Pier Burger while Mrs. Funmeister had a BLT. We both had cole slaw and fries. This is a great place to have breakfast, lunch or dinner. We enjoyed both the food and the ambience. Mrs. Funmeister pointed out that the cole slaw was done in “true southern style.”

Actually, the ambience is major a part of the dining experience. As we waited and talked about our plans to explore AMI, there was all manner of boat traffic. We saw runabouts, jet skis and sailboats cruising past our window. Somebody at one of the tables even gave the restaurant an impromptu harmonica solo.

After lunch we set about having a look around. Behind the deck was a short walkway where people could fish. Downstairs we found another walkway which was well populated with anglers. We asked one gentleman if they were biting.

“Not as good as yesterday,” he replied.

The Rod & Reel is an amazing place. Schools of bait fish ran out from underneath the pier – then would disappear beneath the building again. There was at least one dolphin that swam by while we were there as well. Patrons say that’s a fairly common experience.

Also downstairs we found a bar. Most of the patrons either were solving the world’s problems via politics or discussing their fishing and boating experiences. It made us want to sit down an order, just to do a bit of people watching.

Folks tell us the Rod & Reel is one of their “go-to” places when they are on the island. They stop by at least a few times for different meals while they are on Anna Maria Island. It is easy to see why.

So whether you are cruising by land or by sea, we recommend the Rod & Reel Pier. it is a truly unique experience.