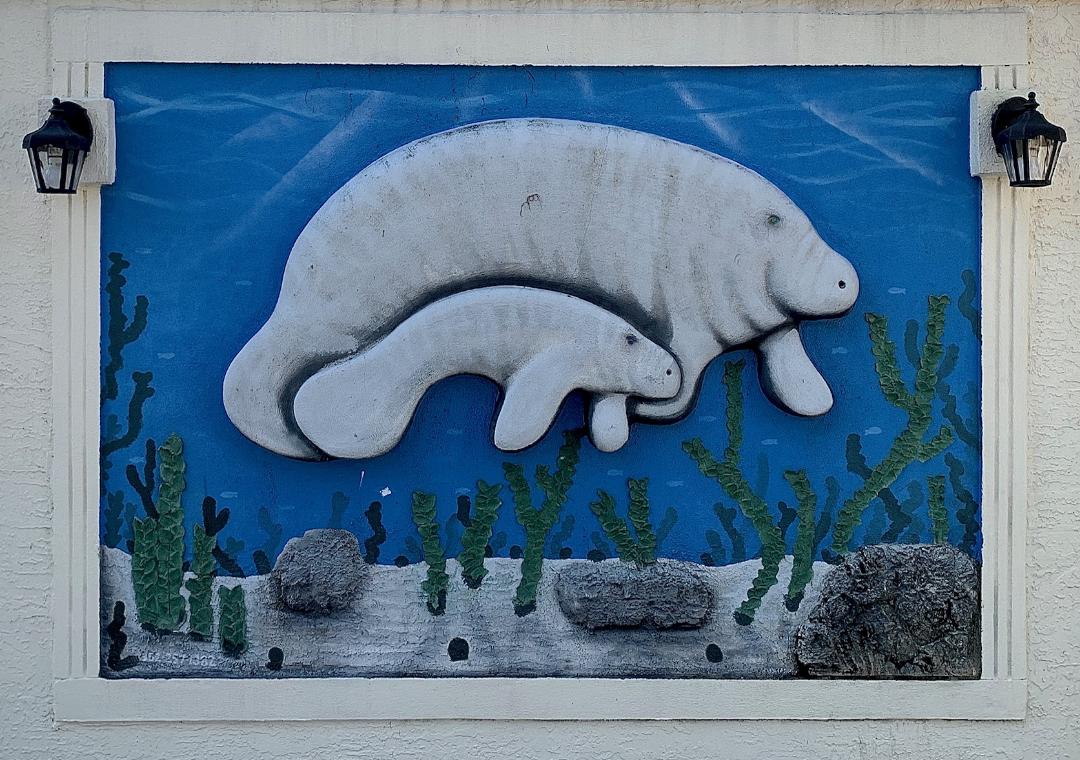 I must say, the Retreat at Crystal Manatee is one of the most comfortable and accessible lodgings we’ve found since we started traveling. We literally were two blocks from Kings Bay and only a few more to the Crystal River Historic Shopping District. Plus it had great creature comforts

In addition, the Retreat at Cristal Manatee is just a hop, skip and a jump to the world-famous Three Sisters Springs and Hunter Springs.

Generally they book two night stays at this family owned and operated facility. However, we were able to get an overnighter. We came in late after a high intensity event at nearby Ocala and I was ready to turn in for the night.

The large king-sized bed was as comfortable as it was spacious.The mattress was “soft” by my wife’s standards. But I had no problem sleeping soundly.

As you can see, the room was done in a minimalist style. There was a flat screen TV on the wall and a small desk surface. However, we had no dresser, microwave or any of the other furnishings. We had a small refrigerator/freezer in the sink area and a heavy-duty nightstand on either side of the bed.

For us, the bathroom was particularly impressive. There was only a commode and what they referred to as a “rain shower.” It was all sealed off by a sliding barn-style door.

For us, this shower was the cat’s meow. The only issue is that we could only use one head at a time or we’d loose pressure. Nevertheless, it was as refreshing as it was fun to use.

The next morning, we went out and walked the grounds. Every time we turned a corner we would find another sculptured sitting area where we could enjoy our breakfast provided by the facility, or just have conversation and watch the butterflies flit among the flowers.

We were impressed at the ingenuity this family used in renovating this traditional property. In addition to these standard settings, there were some tables that had small firepits in the center. We also found a wonderful set of his and hers chaise lounges.

Before we left, we wandered down the street just a block or so and took a look at Kings Bay Park. There is a large area for picknicking and entertainment. There then is a long boardwalk that leads to the bay itself. Walking along we saw quite a bit of bird life. There were pelicans and anhinga among others.

We also saw a lot of water traffic of all kinds. There were fishermen headed out in small john boats and some pontoon boats as well. We observed a group of snorkelers out in the bay and a steady stream of kayakers and paddle-boarders who were launching from a specially-made dock facility.

We could have watched and explored for hours. Later, we took a stroll up Citrus Avenue into the business district and Heritage Village area. It was a great time browsing the myriad of shops and restaurants in the area. We never did make it to Hunter Springs or the Three Sisters.

It is easy to see why the Retreat at Crystal Manatee books two night stays – there’s much too much to experience. The next time we will get a two night package and take our time while we tourist.

Stay tuned, there’s plenty more to come about our adventures. Suffice to say, we give the Retreat at Crystal Manatee five stars – our highest rating. They have done a great job renovating an historic property and the location cannot be beat.

Those who follow us know we like to make great finds – and this is one of them.