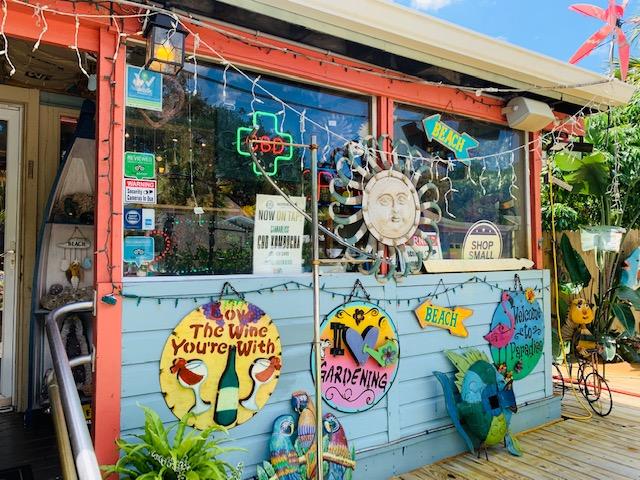 It appears the experience you get when you visit the Village of the Arts in Bradenton depends on when you go. We recently visited Cortez and decided to take in a side trip to VOTA as it’s called. It was a Friday afternoon about 2:00. It was plenty of time, we thought, for even artists to be up and around.

As we drove around around the neighborhood, we noticed the CBD light was on at The Village Mystic. We pulled up in front – as there was virtually nobody else on the street – and went inside.

The lady at the counter of the self-described “metaphysical emporium,” invited us to look around. The smell of incense was heavy in the air and we could only stay a few minutes. We asked her if she had a map of the community we might use to find our way around.

Actually, not. However, she told us that there were plenty of places where maps were posted so we could see the layout. She was right. There were several places that had such displays. The problem was, virtually nobody was open.

Browsing The Village of the Arts

We strolled the streets and looked at the brightly colored houses. Some were better kept than others. In fact, in some cases, it was difficult to tell exactly what was supposed to have been an artistic display and what was something perhaps headed to the curb.

I guess patina is in the eye of the beholder.

Apparently, there were some houses that were not businesses and wanted people to know it. On several gates there were very artistic signs that read “private residence.”

Nevertheless, there appear to be a number of very interesting places that deserve a visit once they are open. There are two dozen galleries and studios such as Art Junkies, Fun Girl Art and The Village Veranda. There are specialty shops and services like Jerk Dog Records, Frank Peter Antiques or Bits & Pieces Fabric and Quilt Shop.

And there are a few restaurants. We saw the Arte Cafe, The Bird Rock Taco Shop and the upscale Ortygia. Sadly, we did not get an opportunity to experience very much of any of this.

We did find there were Historic Walking Tours available – we might do better next time to take one of those.

We think that perhaps next time we go, we will wait until there is a special event. That being said, they don’t advertise their special events all that well. When we went to their webpage and their Facebook page, all the events listed were things that had happened in the past.

We don’t agree with one TripAdvisor review that “this area was the scariest I’ve been to in the USA.” However, if they are to hold themselves out as a tourist destination, they could use a community spruce up day .