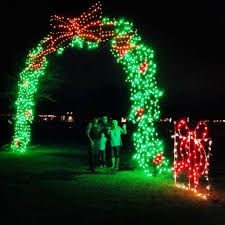 On a recent visit to Melbourne, we had the opportunity to visit the Melbourne Christmas Lightfest. What a wonderful experience it was. There were a reported three million lights sprinkled over hundreds of displays Some of them moving and others that were static.

The display at Wickham Park is held each year It benefits the local Boy Scout troop – which is just another reason to drive through. The first weekend it was opened, visitors were allowed to walk through. By the time we arrived, was a drive-through. For us that was good. After all, it’s a long way for us to walk. Plus, once inside the park we could drive the mile long circle as many times as we liked.

In the middle of the tour, there’s a place to stop and see Santa. He was set up to talk with young and old alike asking “What do you want for Christmas?” At the site, there’s also hot chocolate and the ability to roast some marshmallows over an open fire.

When you are ready to leave, you have a chance to drive through one of best light displays on the property – a 200-foot light tunnel vibrating with multi-colored bulbs. We shot some video and although we were blessed to be able to avoid tail lights for the most part, it really does not do it justice.

We have been to many Christmas displays. This one was as good as any – and better than most. One of the most desireable parts of the tour is, you can go as fast or slowly as you like. That means you won’t miss a thing.

Our congratulations to the Melbourne Boy Scouts for a job well done and we highly recommend The Melbourne Christmas Lightfest as a great Christmas display (yes, there IS a manger scene.)