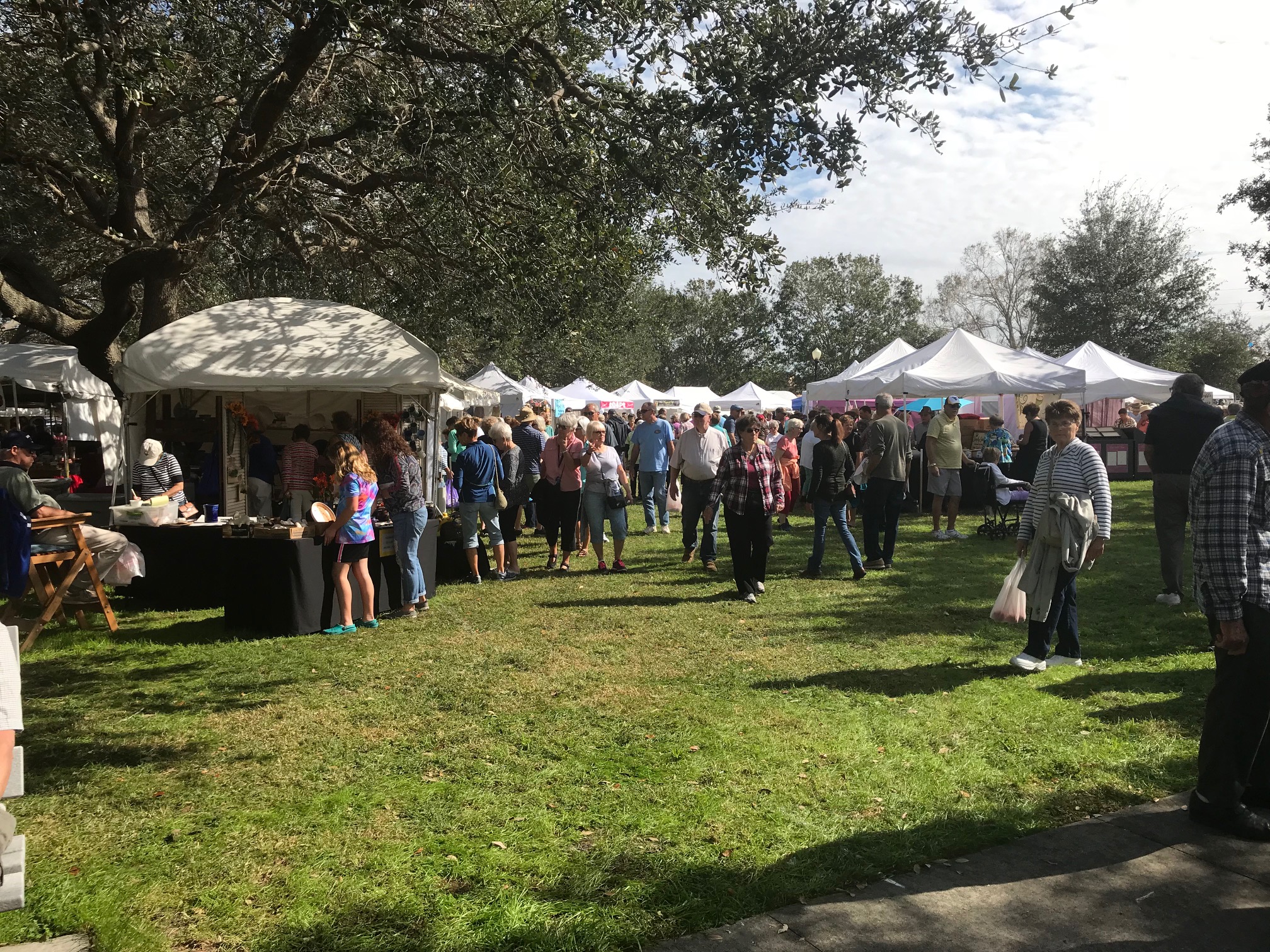 We always are looking for fun places to experience on a weekend, and as it turns out, the Town of Murals, aka Lake Placid was playing host to their 52nd annual Arts & Crafts Country Fair.  More than 100 booths exhibits and displays were there including commercial vendors, public service organizations as well as church and charitable groups. That Saturday could not have been better, with partly cloudy skies, mild temperatures and a bit of breeze. Devane Park was packed with all manner of folks browsing the booths, watching the entertainers and feasting on a food court-full of varied and tasty offerings. It was real home-town stuff.

All of the food offerings were prepared by local church and service organizations. The Lake Placid Athletic Association was serving up Chicago-style Italian beef sandwiches, the Rotarians had spaghetti dinners, Trinity Lutheran Church featured authentic German Bratwurst – with kraut topping if you like. The Action Revival Church had Italian Sausage sandwiches – although it appeared most of the work was being done by the women of the church with the pastor in the back providing “quality control, ” by sampling the product.  When it came to dessert – The Ladies of the Elks had strawberry shortcake (ice cream on request), and nearby the 1st Presbyterian Church had a bake sale stuffed with home made goodies.

Outside the food court there was plenty to see and do The Humane Society of Highlands County was there adopting dogs and selling Puppy Kisses,  Wrede’s Wildlife was there displaying a couple of their majestic eagles and the RC Critters were on hand with a variety of rescued reptiles. The Highlands County Supervisor of Elections Office had a booth with workers diligently signing-up voters. They also helped folks update their registrations and even bolstered their cadre of poll workers. Uncle Sam himself showed up to supervise.

There were commercial vendors from all over the Sunshine State with a myriad of eclectic items. Tim “Clark” Snyder offered artwork made with fossilized shark’s teeth. The Aeromodelers were on hand with radio-controlled model aircraft. From LaBelle came Marchal’s Stained Glass and Gifts and Morningside Childrens Books had tons of titles authored by Keith Lawrence Roman.  As in most arts and crafts shows, there also were a number of skilled woodworkers, clothing designers, artists and other artisans with items for both indoor and outdoor display.

The fair prides itself on locally-produced product, but it seemed this year there had been an incursion of those who had purchased factory-produced items and were then were selling them. That being said,  locals were well represented throughout the site. One of the biggest was the tent from Henscratch Farm & Winery. Underneath their tent was shelf after shelf of jams, jellies, ciders, grapeseed oil and yes, wine varieties from their property just north of Lake Placid.  Entertainment included everything from dancing by The Mountain Dew Cloggers to Celtic music on fiddle, pipe and guitar.  Outside festival, things were hopping. While the festival grounds were dotted by members of Toby’s Clowns and their alma matter – the American Clown Museum and School across the street also was open for visitors.  At last count, more than 700 significant pieces of clown memorabilia could be found within the walls there.  On nearly every surface of every wall, there are oils, prints and photographs of clowns. There are paintings by TV and movie comedian Red Skelton –  a famous clown and artist in his own right.  Many original circus posters from famous organizations like the Ringling Brothers are also displayed. Some have been signed or inscribed to Keith Stokes aka “Toby,” the founder of the American Clown Museum and School.  In downtown Lake Placid, many of the stores and restaurants also were doing a brisk business due to the festival attendees.  A number of visitors took the opportunity to view some of the nearly 50 murals that dot the city – some of them augmented by one-of-a-kind trash containers that have been appropriately fashioned and painted.  In addition, there are 45 bird plaques, over 27 clown cut-outs and a life-sized bronze Florida black bear among other things. Is it any wonder it was voted “America’s Most Interesting Town” by the Reader’s Digest? When it comes to February, Lake Placid is a true fun zone, and the Lake Placid Arts & Crafts Country Fair is the center of it all.