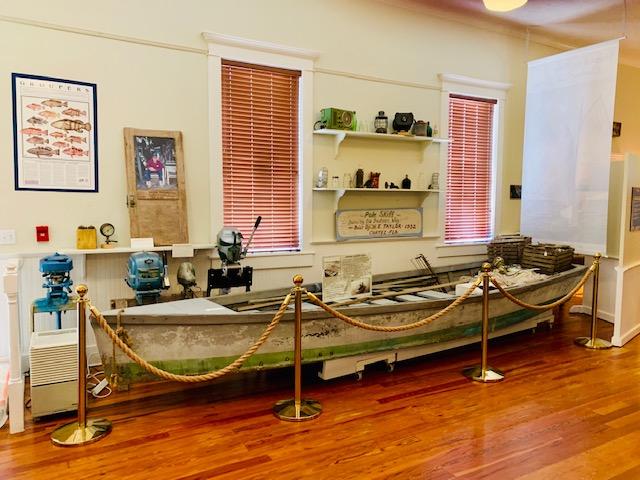 In the past, we had seen numerous posts about the charming fishing village of Cortez. So when we went to the Gulf coast recently, we decided to make a stop there and have a look around.

According to the latest census, there are fewer than 5,000 people in this sleepy little village. That appears to be true. In fact, we noticed that the “historic district” covers a little over a dozen blocks just off Cortez Road.

In their walking tour map of the area, the Cortez Village Historical Society lists just short of 100 structures. Most are homes, but there are a number of restaurants, shops and businesses included as well.

Listed as “The Last Fishing Village on the Suncoast,” it has remained virtually undisturbed by modern development.

However, we did find a couple of tourist attractions in Cortez. First, it is the home of the Florida Maritime Museum. As a fishing village established in the 1880s, Cortez is the perfect place for this facility.

Docents at the museum told us that their goal is to “collect, preserve and share” the artifacts and knowledge of the area’s maritime and fishing heritage.

They have done just that.

We found the place to be loaded with historic pieces, each with its own unique story. One of the largest single displays was a skiff that had been used for fishing. Mounted behind it were several antique outboards that could have run it about in the waters of Palma Sola and Sarasota bays.

In addition to the displays of fishing and sailing gear, we saw vintage navigational instruments, charts on the different kinds of fish harvested and even a wide variety of shells that had been collected over the years.

Exhibits ranged from depictions of the original residents, to the development of commercial fishing and even recreational boating. There are several dioramas and the walls are dotted with photos, paintings and plenty of descriptions of what you are viewing.

As we walked the grounds, we found that the buildings themselves are of historic significance. The museum is housed in what was the original Cortez Schoolhouse. Another building on the grounds was the old Burton Store. That was undergoing renovation even while we were there.

As we walked behind the museum, we saw a small foot bridge. Dubbed “The Bonefish Bridge,” it spans a small canal. We later learned that those in kayaks actually traverse the waters underneath.

On the other side is the Cortez Cultural Center. It too is a repository for the better than a century of area’s history.

As small as it is, we found the cultural center to be chocked-full of artifacts and stories. Again, the walls were peppered with photos and written explanations.

The cultural center is a fascinating place. It gives background on the many families that helped to develop this community. We learned that these people were hearty and resourceful in pulling a living out of the nearby waters.

The nice thing was that in both locations, there were docents eager to tell us the story of Cortez. For us this was an amazing journey to view the rich history of this tiny town.

Lunch at the Swordfish

As you can imagine, all this touring works up an appetite. Fortunately for us there were a couple restaurants just down the road. (Actually, nothing is very far away in Cortez).

For the second time, we found ourselves at a fish restaurant. I must admit, the Swordfish Grill & Tiki Bar proved to be another great choice. Although we arrived right at opening time, the staff was quite gracious and welcomed us in – seating us immediately.

Both the inside dining area and the outside deck are spacious. We surmised this place probably does a brisk business in the evenings. The booths are attractive, separated by antique rod & reel with anchored lines. The outside is done in tiki hut style.

In fact while we were there, a troubadour and his guitar already had taken to the stage and was entertaining those on the back deck.

Because we were at a seafood restaurant, I broke down and ordered the gator “bites.” I figured, better I eat the gator than the other way around. Mrs. Funmeister demurred and had a chicken salad on marbled rye.

Again, just as at the Anna Maria Oyster Bar, we had a delightful lunch and a great view. We can absolutely recommend the Swordfish Grill & Tiki Bar – even if you are not a seafood lover.

Incidentally, Christie was a great waitress.

This time around, we had a chance to see some of the highlights of this quaint little fishing village. And we got enough of a taste to want to come back and see more. Next time, for instance, we will come back when it is a bit cooler and we can take the walking tour. It will be interesting to view these historic homes.

In the end, Cortez is a fun little place and just the kind of off the beaten track location we love. And, we think you might love it as well.