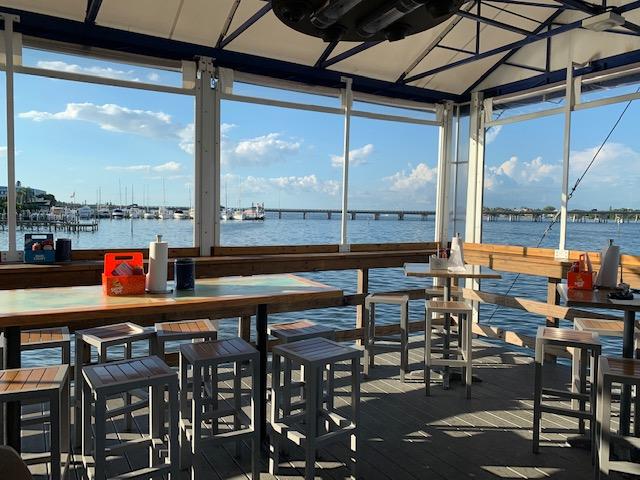 We are not seafood lovers, so to tell me we would end up at the Anna Maria Oyster Bar would have been amazing in itself. But it turned out to be one of the greatest dining experiences we have had in our sojourn around Florida

It started as a drive up Longboat Key, when Mrs. Funmeister spotted Historic Bridge Street. Being a sucker for “historic” things, we swung the funmobile down the street. It terminated at the Anna Maria Oyster bar and the number one parking spot was vacant.

Known officially as Anna Maria Oyster Bar on the Pier, it is one of four locations in the area. I decided to take some photos from the pier. In the meantime, my wife decided to look at the menu. To my absolute astonishment, she suggested this would be a great place to dine.

Let the record show, we are not seafood lovers. However, this is a chain that has options. Instead of eating in the indoor dining room, we opted for the deck. The elevated tables gave a great view of the juncture of Palma Sola and Sarasota bays.

The deck is covered, shielding you from the sun. And the afternoon provided a nice breeze – which keep the air moving. We drew Lisa D. as our waitress. She was very efficient. Moreover, she knew a lot about the area, which really enhanced our experience.

While we were there, the Anna Maria Princess left on one of their evening cruises. You could hear the music as the paddlewheeler made its way out onto Sarasota bay.

Followers of this blog know, we don’t do seafood. I ordered the portabello mushroom appetizer, she got a medley of sides. Those included Hush Puppies, Cole Slaw, Red Bliss Potatoes and mixed veggies. In this case it was Carrots, Green Beans and Wax beans.

We sent our compliments to the chef.

As noted earlier, the pleasant surroundings enhanced the meal wonderfully. In addition to the Anna Maria Princess, there was a sufficient amount of water traffic of all kinds to keep us interested. Even a stand-up paddleboarder made his way through the boats at anchor during our stay.

In the end, whether you are a seafood lover or not, The Anna Maria Oyster Bar on the Pier is a true hidden gem. There’s plenty of selection on the menu, it all comes at a very reasonable pricepoint and the view from the outside deck is wonderful.

The Biscuit Barn Has The Best Biscuits in Florida

The Retreat at Crystal Manatee is a Real Treat