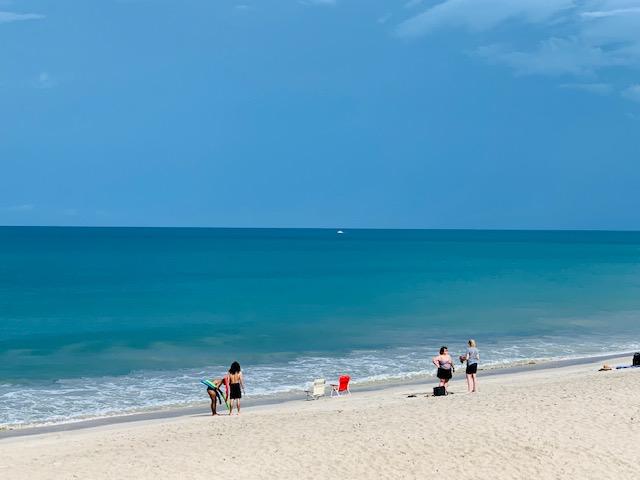 We can hear it now – “Where’s Wabasso?” Nestled between Sebastian and Vero Beach along the fabled Treasure Coast is the hamlet of Wabasso. Although it seems small as you drive through the single stoplight at the intersection of US Highway 1 and State Road 510, the area considered Wabasso covers quite a bit of territory all things considered.

Wabasso is the home both of the Wabasso Bait & Tackle Shop and the Wabasso Beach Shop. Both are necessary stops depending on whether you are a fisher person, a surfer or a swimmer.

A quick turn on 510 will spirit you down Bridge Blvd, past the Wabasso Causway Park, over the Indian River Bridge and onto Wabasso Island. There you’ll find both the posh Marsh Island Club gated housing community and the Environmental Learning Center.

Heading east, you’ll go over another bridge, past tiny Michael Island, onto Wabasso Beach Road and the barrier island. It terminates at Wabasso Beach Park. The park is one of many on the thin barrier island which starts at Palm City and parallels the Florida coast all the way to Port Canaveral.

Wabasso Beach itself is a pleasant place. In mid-August, it is sparsely populated. A few swimmers, some folks getting a tan, some digging for shells or fishing – while others were just walking the beach. It’s not until winter when wave action picks up that the surfers arrive.

Wabasso is One of Many

In the midst of it all is Sebastian Inlet State Park. Located 10 miles south of Melbourne and six miles north of Vero Beach, it serves as the dividing line between Brevard and Indian River Counties.

Sebastian Inlet State Park is open around the clock and has plenty to do for the $8 per car admission fee. To start with, they have a trio of bike trails, and a birding trail.

And there’s camping, swimming, fishing, picnicking and playgrounds for the kids.

But our trip was to Wabasso. It has other claims to fame. There’s Nature Farms, aka – the Wabasso pineapple farm. Sadly, by the time we got there, no pineapples were left. Apparently an early summer heat had ripened the thousand or so that were in stock and all had been sold.

On the other hand, we found Rock City Gardens. The nursery was started in 1978 by Ed and Hilda Chapin. They were second-generation owners of the historic Tennessee tourist attraction Rock City – and that’s where it got its name. In 1983 the nursery was purchased by Tom and Rhonda Lowe. They own an operate it to this day.

Described as “Seven Acres of Inspiration,” Rock City Gardens is a landscaping and nursery business, event center and botanical park that can keep people busy for hours. In addition to weddings and photo shoots, there are walking trails lined with fountains, water features and tons of ideas on how visitors might decorate the grounds of their own homes.

Serious gardeners have described it as one of the best nurseries on the East Coast. In addition to their charming nature trail, spectacular pond and man-made creek, they feature an extensive bromeliad area. One of the most amazing parts is, there’s no admission charge.

Our Stay on the Treasure Coast

When we went to Wabasso, we took our own advice and stayed off site. Our selection was the Best Western Plus in Sebastian. This gave us a lot of options. We could cruise up to Melbourne or down to Vero Beach. It was good accommodations at a great pricepoint.

We also found some great restaurants. We first had lunch by the sea on the deck of Waldos at the Historic Driftwood Inn at Vero Beach. It is hard to beat good food seaside. This is a place with a great staff and a wonderful menu. Again, it didn’t break the bank

Following our leisurely drive up the barrier island, we crossed the causeway and had dinner at Melbourne’s Squidlips. We had eaten at their locations both in Sebastian and Cocoa Beach. This was the last and certainly had the best ambiance.

This was a great foray onto the Treasure Coast. We already have set our sights on the Historic Driftwood Inn for a stay. We also plan to talk more about Historic Downtown Vero Beach. Ocean Boulevared has a feel all its own.

In the end. Wabasso was a great trip. It gave us a lot of ideas of other places we would like to visit in the future – especially Sebastian Inlet State Park. We recommend it for all our followers.

If and when you go, tell us how you enjoyed it.