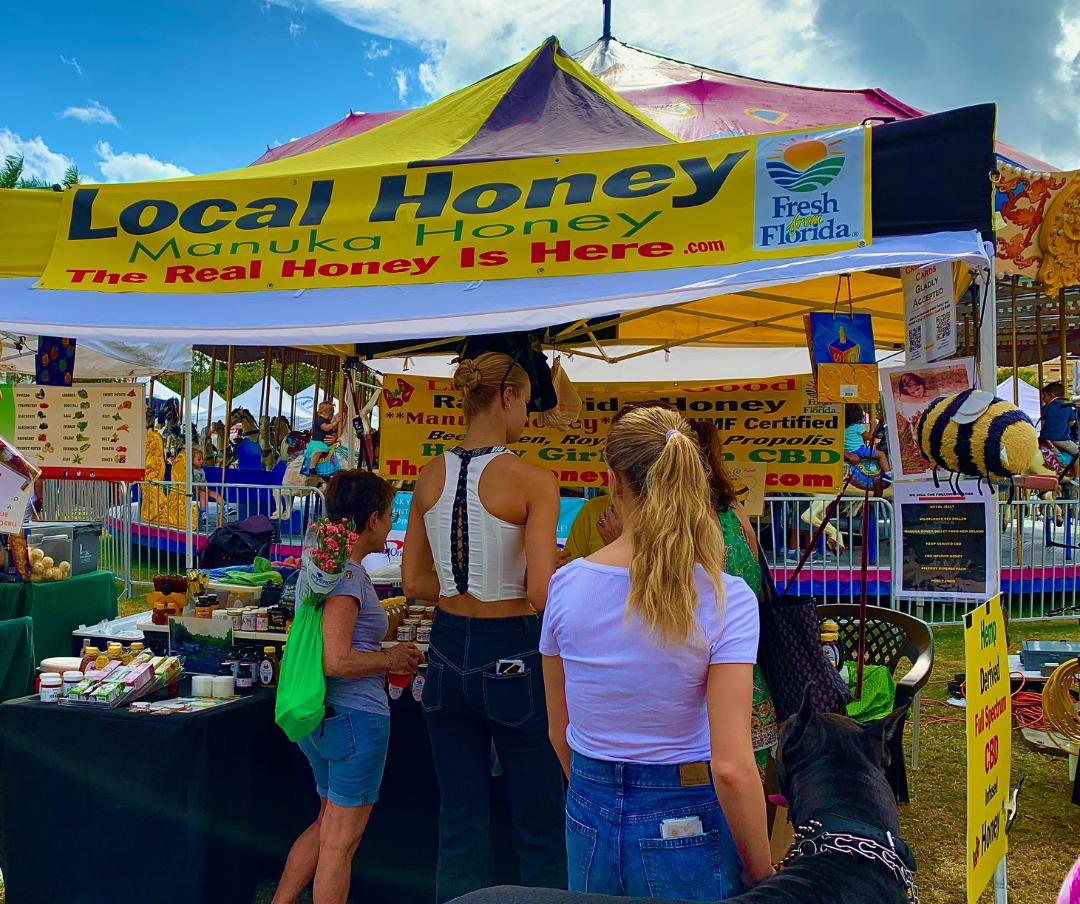 Recently our travels took us to Delray Beach. There, we discovered their weekly “Green Market.” We have been to a few farmer’s markets. As far as we are concerned this is one of the best.

As we understand it, the Delray Beach Green Market got its start more than 20 years ago. Originally. it was a project of the local Community Redevelopment Agency. Since then, it has grown to nearly 70 vendors in the Old School Square Park.

Of course there are the traditional produce vendors. But there’s so much more. In browsing the various booths we found baked goods, handcrafted items, handmade soaps, kitchenware, public service groups and informational displays.

We were delighted to find so many specialty vendors. Farmer’s Market Honey had a wide variety of specialty and infused honey (we got some). Also, Gratitude Gardens Farms out of Loxahatchee had a wonderful display. They specialize in sprouts, micro greens, mushrooms, turmeric, ginger and fruits.

Mrs. Funmeister stocked up on some fresh baked bread from The French Bakery. In the meantime, I decided to take a look at some of the many different kinds of artisan granola from Laurie’s Pantry.

Like many of the farmer’s markets we have attended, there was some nice entertainment. Music was provided by a duo who played and sang popular tunes. He played a big acoustic guitar while she provided rhythm on the conga drums.

One thing we hadn’t seen at other farmer’s markets was a “Holiday Carousel.” The giant merry-go-round dominated the center of the square and was a hit for young and old alike.

In addition to the regular entertainment there was people watching. There were children, some colorful individuals and dogs. We saw lots and lots of dogs. In fact, Delray Beach might have set the record for the pooch parade.

If you’re down in Delray Beach, make certain to stop by this weekly gathering. It has a ways to go to match the Sarasota Farmer’s Market – which still tops our list. Nevertheless, the Delray Beach Green Market is a wonderful compendium of booths and displays, there’s music and you might even catch a ride on the carousel.

You might also want to visit the Historic Cason Cottage Museum – which also is nearby. We hope to tour and tell you about later.