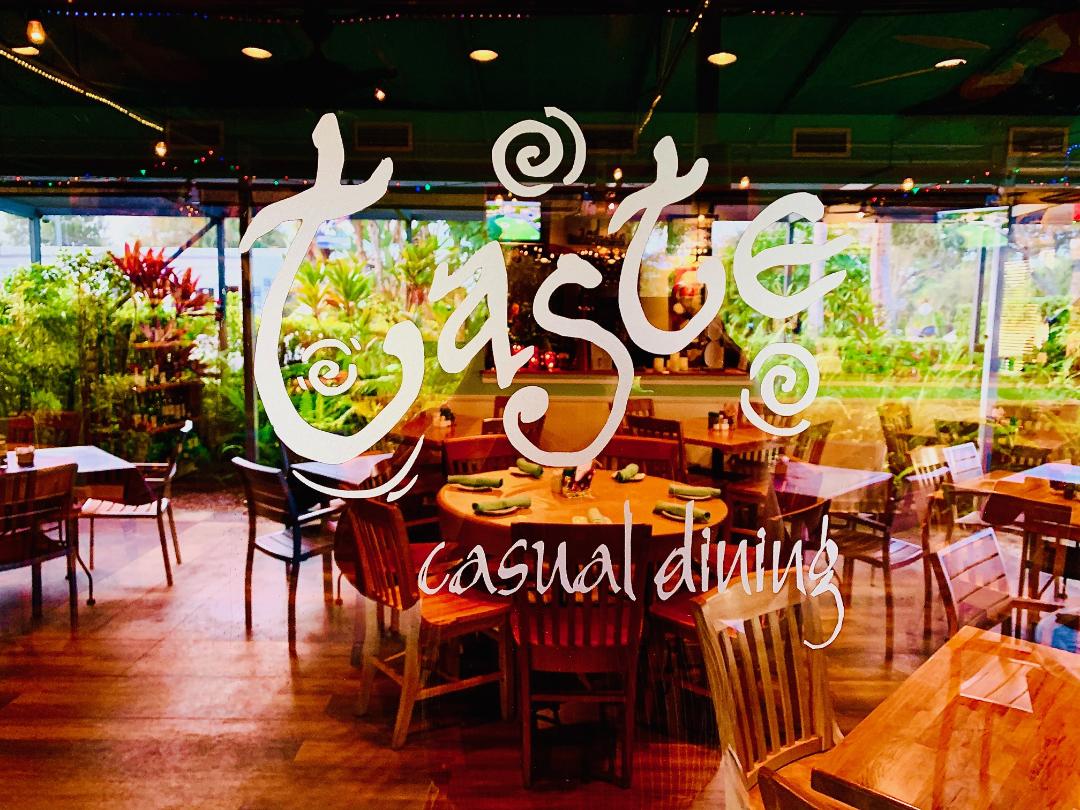 So we were traveling the Treasure Coast and looking for a place to have dinner. That’s when we found Taste in Hobe Sound while perusing TripAdvisor. They list themselves as casual dining, but they are so much more.

It took us a while to find the place at the intersection of Bridge Road and A1A in the Historic District of Hobe Sound. But when we got there, it was worth the effort.

Bigger than it Looks

At first blush, it looks like a sports bar. There are flags and posters for the New England Patriots and Philadelphia Eagles. And a number of large screen TVs are anchored to sports channels.

We parked ourselves at the bar. But after an initial order, we did a little investigating. There is an adjoining inside dining room and an outdoor dining area as well.

There’s dining and conversation on the inside. But the outside dining area also is the home to great entertainment. They have hosted musical performances from David Morin as Elvis, a Neil Diamond tribute with Neil Zirconia, Mickey B. Music as well as a number of special parties and themed events.

And the outdoor dining area is well laid out and well equipped to handle all kinds of occasions.

But as nice as the ambiance is, the food is the star of the show. Our visit was simple. I ordered a Mediterranean Chicken Wrap while Mrs. Funmeister had a pick two with a Turkey Club and French Onion soup. We were surprised and delighted by both the portions and the taste.

I was delighted as a special was Jicama slaw. I’d not had that since we dined at the Perch 360 when we were in Punta Gorda.

But that’s an indication of the 5-page menu that has something for everybody. Salads range from classic Caesar to Caprese, to their signature Savannah Gorgonzola House Specialty. Seafood delights highlight the starters. How about Escargot, Bruschetta, crab cakes or even Mrs. Peters’ Smoked Fish Dip.

Of course there’s a full line of sandwiches, wraps, tacos and a wonderful Maine Lobster Roll. The entrees are just as special. There’s Fillet Mignon, Chicken Gizmonda, Mussles Fra Diavalo or Shepherd’s Pie. You can find descriptions of these and more at Taste’s online menu.

For drinks, there’s beers, wines, spirits and a full bar.

A Great Place for Foodies

Yes, Taste is casual dining, a great place to meet friends for dinner, drinks, fun and perhaps even to view a game. But it’s a great place for foodies. Our first time was a surprise, but the next time will be intentional. We can suggest this as a great little place on Florida’s Treasure Coast.