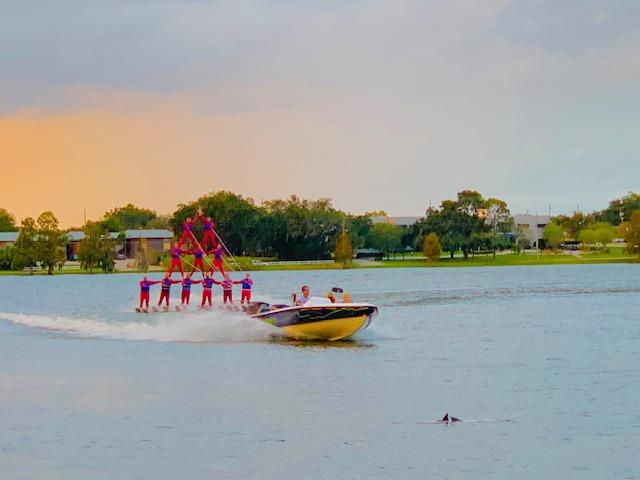 Today is Father’s day. It is the day each year we dedicate to dad (and grandfather). And just as we like our dads to know how much we appreciate what have done for us and our families, there are some Florida Fathers to whom we’d like to pay tribute.

As you may or may not know, Dick Pope is widely considered to be the father of the modern day theme park. We had the opportunity to visit his creation, Cypress Gardens, on many occasions before it finally was sold in 2009.

Dick and his wife Julie originated the attraction in 1938, when they converted the former Winter Haven Yacht Club into “Cypress Gardens Adventures.” We had the opportunity to hear a commentary from Mr. Pope himself during one of the famed electric boat rides.

He told us how it began with the beautifully manicured botanical gardens. He recounted how later they added The now-famous ski show. We listened as he talked about the precision jumping and powerful speed boats that were part of the program.

In fact, the Cypress Gardens Ski Show Team still puts on a monthly program on Winter Haven’s Lake Silver. We had an opportunity to go and watch a delightful program.

We were amused at one of Pope’s stories about the origin of the Cypress Gardens Southern Belles. It appears that after a bad Florida frost, some of the female water skiers were pressed into service. They donned some antique antebellum hoop skirts and stood outside the attraction waving to passing motorists.

He told us that was his way of letting people know that Cypress Gardens was open for business. They were such a hit, he hired more girls to be Southern Belles on a full- time basis.

We have talked a lot about the Sebring International Raceway. It was Alec Ulmann that conceived and ran the 12 Hours of Sebring. We count him as the father of endurance sports car racing in North America. Although we never had the opportunity to meet Mr. Ulmann – we have seen his dream come to pass,

Nearly 70 years later, the Mobil One 12 Hours of Sebring is still running. We have not missed one of these races in decades. And our advice is that it should be on your bucket list.

The 12 Hours first was run in 1952 over the access roads of the former Hendricks Field – an Army Air Corps bomber training facility in Sebring. Over the years we have watched it grow into one of the most significant races of its kind in the world.

We were delighted to see that the Mobile One 12 Hours of Sebring has been voted to be North America’s Top Motorsports Event on the USA Today’s 10best poll.

But our pick for Florida’s top dad has to be John Gorrie. Yes, we were stumped as well when we first heard his name. We were more amazed when we learned that Dr. Gorrie is considered the father of air conditioning.

Actually, we first learned of this while researching Florida’s Forgotten Coast. I have recommended to my wife that we make a pilgrimage to the John Gorrie Ice Museum in Apalachicola.

As we understand it, Dr. Gorrie wanted to get “good air” for his patients. They tell us he hung ice in basins from the ceiling, to cool the air as part of the process. We appreciate Dr. Gorrie’s work especially as summer arrives.

On Father’s Day 2020 we wish to thank all of our dads (and grandfathers). Our hope is that all of them (and their wives) get a chance to do some fun traveling around the Sunshine State.

Florida Thanksgiving Travel Down for 2020