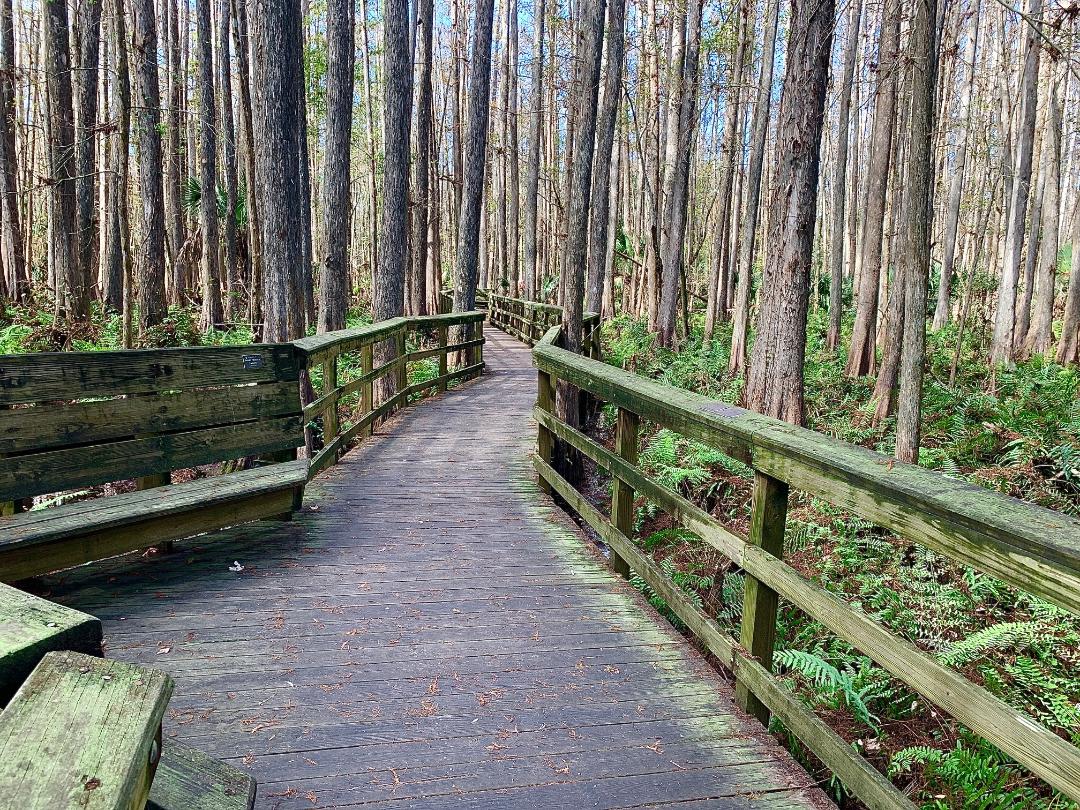 We have visited many man-made places since we “stopped waiting for when.” However, one venue we never really experienced is God’s creation – Florida’s great outdoors.

Appropriately, they have a CCC museum there which we found to be simply fascinating. We found lots of opportunities for hiking and biking. The park also offers a tram tour if you want to ride, but we decided to hoof it.

Our choice was to walk the Cypress Swamp Trail. Unlike many of the other options – which are trails – this is a walkway. It starts out as a full sized boardwalk with high railings on each side.

It simply was an amazing walk. We were suspended above the ground, looking over pristine wetlands. The railings were dotted with plaques posted in remembrance of park supporters and volunteers. We noticed each of the railings also had been marked with a number to help identify our spot on the walkway.

Although we didn’t spot a lot of wildlife, there was an amazing amount of flowers and plants among the Cypress trees. However, about halfway through, things began to change.

Our full-sized boardwalk went down to half-sized, with only a low railing along the one side. It was a bit disconcerting for us to walk along this narrow pathway with nothing really to hold onto.

Our comfort level was down. Moreover, we were glad that we did not see any of the snakes or alligators that apparently call this part of the park home. That being said, we were blessed to see some birds. They were out foraging for a late lunch and did not seem to mind us snapping a few pictures of their activities.

We got back on solid ground without incident and headed for the Loop Road. This is the thoroughfare that carries you back through the Hammock. Its canopy road is one of the most pleasant drives we have had in quite some long time.

Because the Loop Road runs one way, we were able to cruise at idle speed through the lush greenery. Hikers and bicyclists waved at us as we cruised lazily by. It also gave us a chance to really look at and enjoy the scenery of the park.

In fact, if you like the drive you can go around as many times as you wish. If you like to walk, we spotted a total of nine different trails that head out along the way. There were small spots for us to pull in – most had cars or bicycles already parked there.

The ranger cautioned us that there are no bicycles or pets permitted along any of the walking trails. We did pass at least one couple walking their dog(s) on the Loop Road. By our count, there were three on leashes.

In addition to the trails, we had a chance to visit the Civilian Conservation Corps museum. This is a tribute to the boys of the CCC that built Highlands Hammock, as well as a number of other parks across the Sunshine State.

The day we were there, docents were stationed throughout the building. They told us the structure itself was built in 1939 and dedicated in 1994 as a museum. It is chock-full of artifacts and interactive displays where we learned about the CCC activities.

There were multi-media presentations about how the young men came from all over the country to participate in the CCC project to help build the park system.

The main area where we found the CCC museum also features an open picnic spot with a playground, public restroom facilities, a number of pavilions with picnic tables and barbecue pits as well as a store known as The Hammock Inn.

We went in hoping for a restaurant, instead we found basically a dry goods store with a small snack bar (we could not even get a drink with ice.) The front room was populated with T-shirts, hats, sunglasses, books and even walking sticks. The second room was a cross between foodstuffs and camping supplies. It appeared to us that half the building was dedicated to park visitors with the other half set to supply needs of campers at the park.

Camping? Oh yes. They have one area that has full service including water and electric hookups. Another is deemed their “primitive campground.” From what we saw driving by, there wasn’t a whole lot more than a place to pitch the tent.

If you want to hold a meeting or an event, the park has an open air amphitheater on the Loop Road or a Recreation Hall (with A/C) in the campground. You can even rent bikes there and pedal your way through the park.

All in all, we found Highlands Hammock State Park to be a pretty fun experience. We were delighted with most of our walk along the boardwalk. It made us consider coming back and trying one or more of the other trails. We might even come back for on of their special events – or just rent a couple of bicycles and ride around for a while.

If you have children or grandchildren, it certainly would be a good place inasmuch as they have a wonderful playground. It’s centrally located among picnic tables for the adults to keep their eye on things.

Best of all, we found the six dollar per car price tag to be more than reasonable. For more information you can call the ranger station at 863-386-6094. Or you can find them through the Florida State Parks website