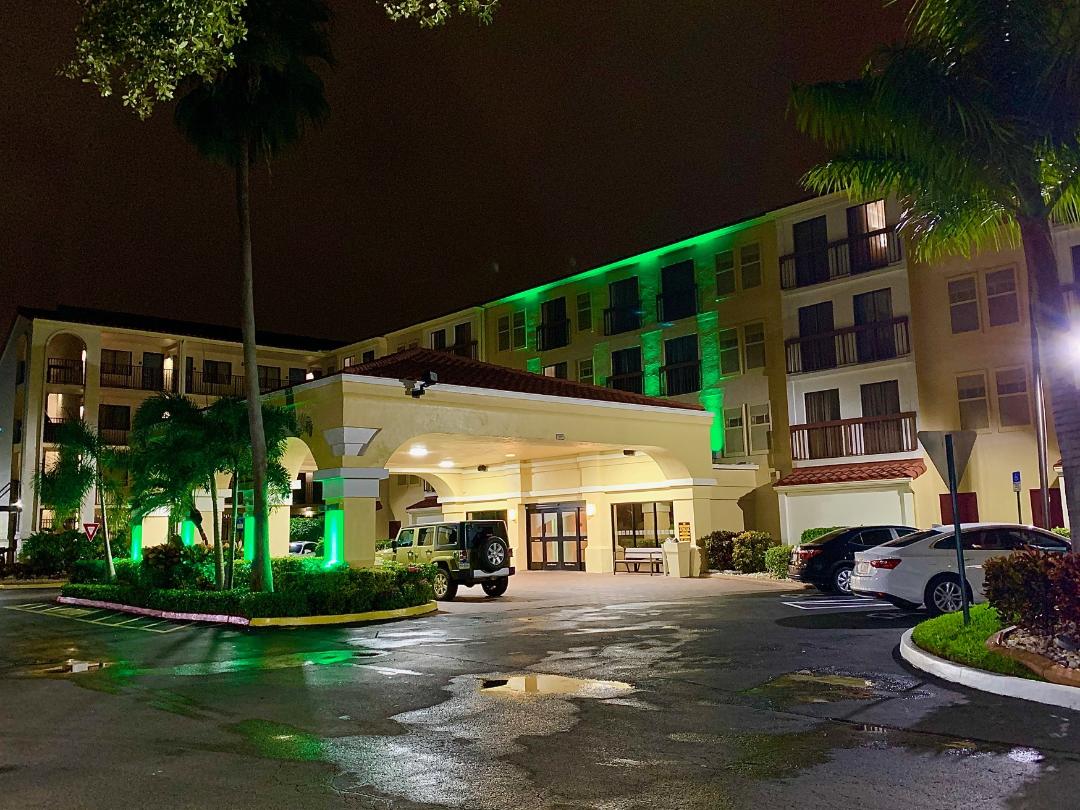 Those who follow us know we always are looking to get the best deal on our hotel and we found the Holiday Inn Boca Raton North really fit the bill. Our plan was to combine a business outing with a vacation. We searched the Treasure Coast and found this place on TripAdvisor.

A Lot For Your Money

At the rate we booked, we expected a simple room. Imagine our surprise when we found we had a suite. The foyer was a couch with a valet, a small work area and a cabinet including a dresser, a flat screen TV, plus a microwave and a good sized refrigerator.

We actually used the valet bench as a coffee table in front of the couch. Moreover, had we wished, the couch folded out into a bed that could probably sleep two. The valet also featured a bank of electrical sockets and USB plugs.

The bedroom was dominated by our king-sized bed. There were nightstands on either side and an actual closet with plenty of room for clothes. Inside there also was a small safe, an iron and an ironing board.

Additionally, there was another small dresser and a second, smaller flat screen TV mounted on the wall we could watch from the bed. Overall, we give the bed an excellent comfort rating. And while the pillows were huge, they were not overstuffed like they are at some of the places we’ve stayed.

The bathroom was split, with the shower and commode on one side in a room all its own. It was a walk-in shower – and best of all, there appeared to be plenty of hot water. The sink and mirror was positioned in an alcove between the foyer and the bedroom. It featured a halo-style makeup light with a touch screen on-off button.

Mrs. Funmeister adds, that hands-down it was one of the cleanest rooms we have enjoyed in our travels.

A breakfast was included at no additional cost on each day of our stay. This breakfast was an upgrade from other places we have visited. In addition to the regular breakfast bar fare, there was an omelet station. There, we could pick our ingredients and a helpful attendant would make it for you on the spot.

We were impressed by both the quality and selection. Our options included fresh fruits, cereals and rolls. Moreover, there were warmers that held bacon, sausage, home fries plus pancakes and french toast sticks. Each warmer sported a digital read-out that showed their respective temperatures.

The fact that we had glassware and actual plates at our first breakfast on Thursday also was most unusual.

In fact, we were blown away by the number of amenities at the Boca Raton Holiday Inn North. Should we have chosen, there was a large pool and a hot tub we might have used. Some folks took advantage of the fitness center and there also were meeting facilities on the property.

In the evening, we learned that the breakfast area magically transformed into a Tiki Bar with both inside and outside seating.

Although we have plenty of electronic devices and could use the wi-fi at will, it appeared not everybody had that advantage. We saw a nice older couple gathered around the screen at the business center. The staff was very kind and attentive to help them find what they needed on the worldwide web.

In the end, we cannot say enough nice things about the Boca Raton Holiday Inn North. We found the staff to be friendly and attentive. From the small snack store in the lobby to the huge swimming pool, there was not much left to chance.

And all this at a fare that met our picepoint. We absolutely can recommend this property for a quiet and comfortable stay. It also is centrally located to I-95 for those headed to other spots on the Treasure Coast. We have decided – we will return.