Home Our Travels Stuart – Sailfish Capital of the World 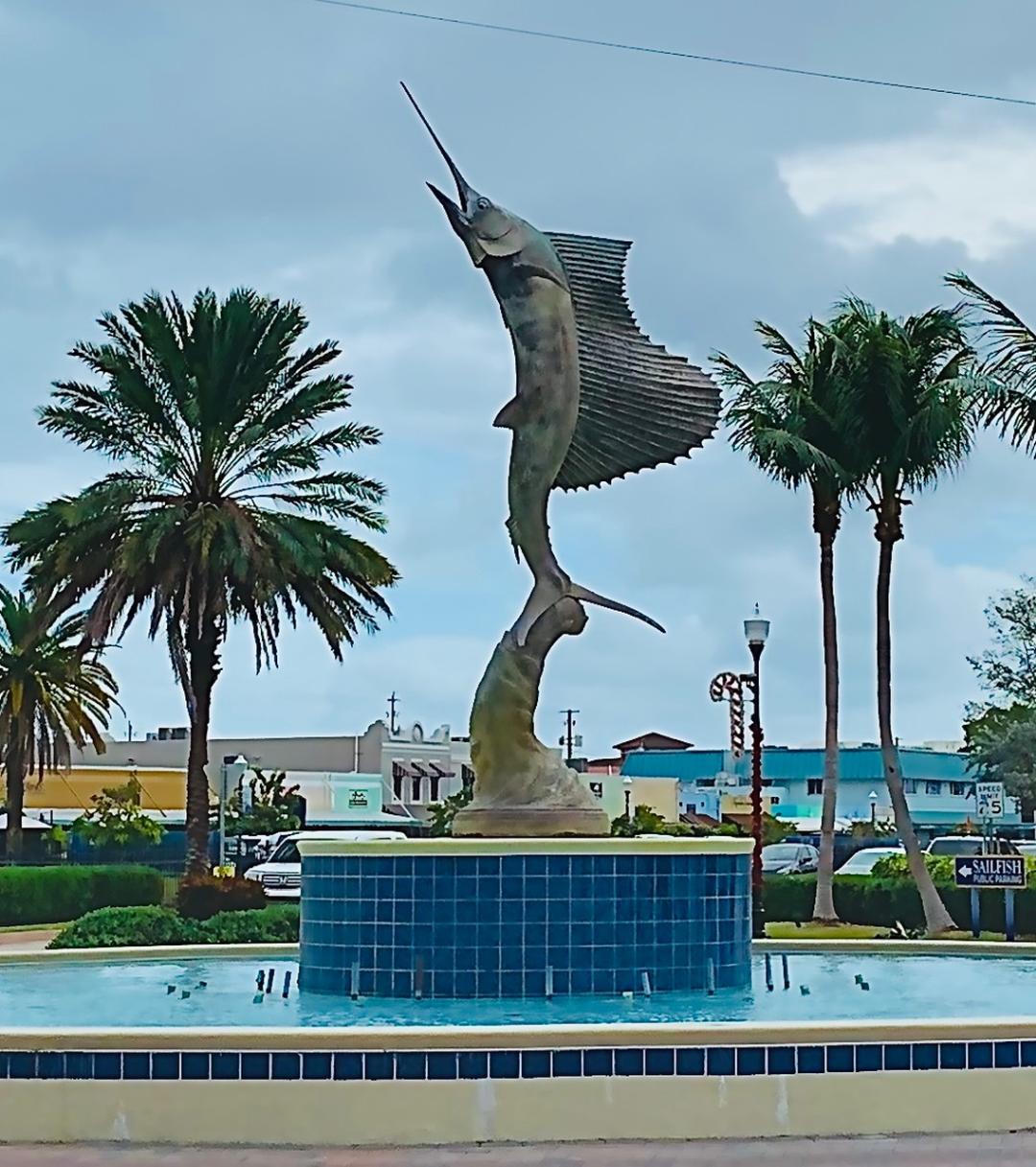 We had seen on several occasions that the city of Stuart was known as the “Sailfish Capital of the World.” So on a recent trip to the Treasure Coast we decided to check it out. In fact, we found sailfish represented just about everywhere. The most prominent is a giant sailfish fountain. It is centered in the middle of one of the city’s many traffic circles on our way into the historic district.

Like many Florida cities, Stuart has a couple of distinct areas. There is the Highway – in this case US 1 – and there’s the historic district. It appears that the city fathers in Stuart are doing their best in the revival of their downtown section. There’s the historic downtown and a “Riverwalk.”

For instance, the downtown area has been spruced-up with a lot of streetscaping. Such things as brightly painted thoroughfares, well-marked crosswalks and other amenities make it very inviting to the eye.

Moreover, we found a bevy of interesting little shops to visit. No matter what you are looking for – there’s plenty of it. We found some great little clothing shops like Island Cotton, Must Boutique, the Snappy Turtle and Funky Monkey Lifestyle wear.

There’s also Aphrodite Style, Harbor Wear, Radiant Outfitters and Victoria Rose to name a few. We would be remiss if we did not mention The Sandal Shack (with the huge flip flop hanging outside), Clam Shell Clothier and The Mainsail Co. as well.

There also were some great art shops and galleries. The Geoffery C. Smith Gallery had some of his award-winning artwork hung. The Gilt Complex – a framing shop that also does art conservation. We especially enjoyed our browsing at The Rare Earth Gallery.

A number of other, fun and specialty shops we saw dotted Osceola Avenue included Joseph Lynn has a decor gallery with unique European objects d’art, There’s a great gift shop called Gumbo Limbo Coastal Chic, A number of jewelry stores, a wonderful little tobacco shop called “Smokin’ Premiums” and The Sauce Shack. That’s a place with all kinds of barbecue and hot sauces. Some of them are so hot they actually have to be kept under lock and key.

For the more faint of heart, there are some pretty good restaurants up and down the avenue. The Osceola Street Cafe which offers a quaint atmosphere serving homemade breakfasts, baked goods and specialty soups, salads, and sandwiches. Nearby is Duffy’s Sports Grill – a great little eatery with a LOT of TVs.

A tick up the food chain is The Black Marlin. Located on the former site of the oldest tavern in Stuart, they naturally specialize in fresh seafood. A few steps away in the Post Office Arcade is the Cafe Martier. They are known as “an eclectic eatery, wine garden and speakeasy – with a breezeway piano bar.”

If you like Italian LouRozano’s Italian Fusion or Luna Italian Cuisine are just a short walk. Also within strolling distance is The Mulligan Beach House Bar & Grill, the Gafford and The Stuart Boathouse. We found the Boathouse to be an interesting place, with a back patio that faced out onto Stuart’s Riverwalk.

The Riverwalk is a winding boardwalk along the St. Lucie River. It is anchored by a large stage, which is used regularly for concerts and special events.

If you don’t feel much like walking the area we have some good news! The city has a free tram service that sports around the area on a regular schedule. You can go where you want, and they will pick you up or drop you off anywhere along the route. The small trams also are wheelchair accessible with a large ramp for easy ingress and egress.

We spoke with one of the drivers, who was quick to note different points of interest. He also gave us a brief history. Our next visit, we will take a ride.

One of the entertainment anchors we found in Stuart is the Lyric Theater. Built in 1926, it is a venue for stage productions, movies and musical performances ranging from orchestra to rock ‘n roll bands.

We found one of Stuart’s most striking features is the “Walk of Fame” featuring a galaxy of gold stars leading up to its marquee and box office.

Those who follow us know we love historic districts. Stuart – the Sailfish Capital – gave us a lot to explore and we just scratched the surface. We plan to take a tram ride with driver Barry, attend one of the Rockin’ Riverwalk events and eat at a couple of the downtown restaurants.