Home Our Travels The Flashback Diner is a Truly Unique Experience 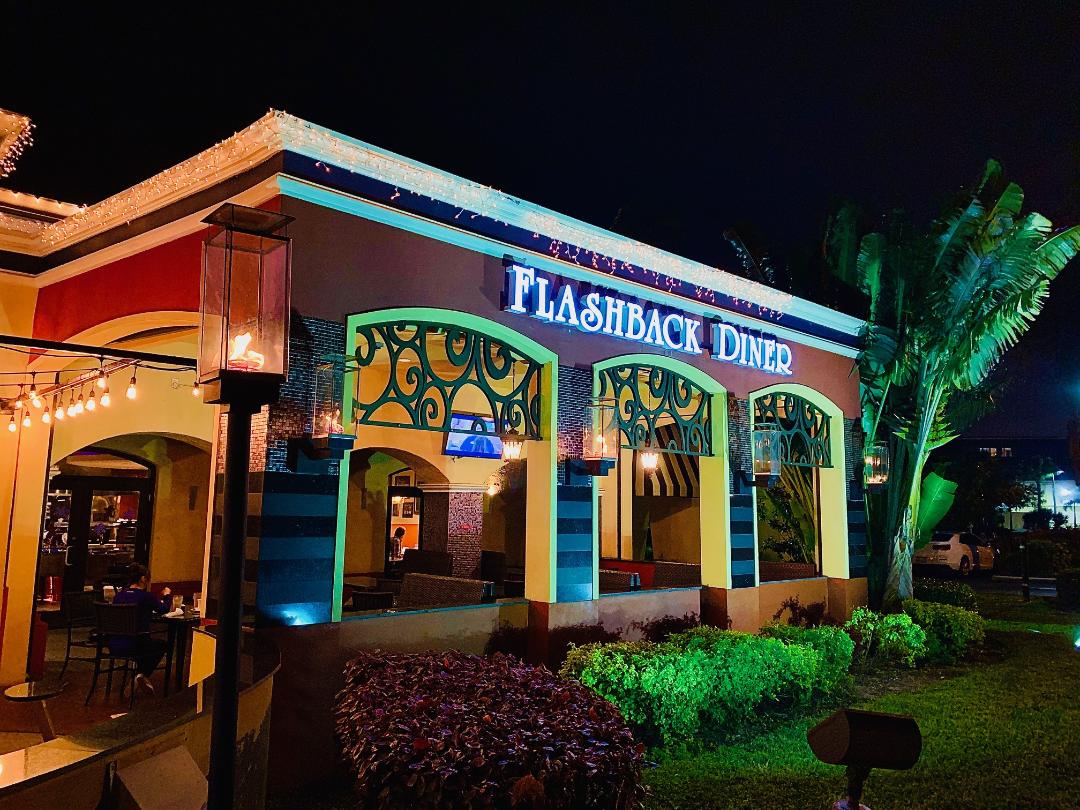 Those who follow us know we like new dining experiences. When we saw the Flashback Diner in Boca Raton, we expected to find the standard white-tile-and-chrome burger joint with 1950’s music grinding away in the background.

Boy, were we wrong.

Walking up to the place was our first clue. There was stylish outdoor seating. One area was a semi-circle around a fountain with small tables. It was a perfect location for drinks and conversation. Another was a single, long table that begged for groups of eight or more.

Boca Raton is one of three Flashback Diner locations in South Florida. We were impressed by their dedication to to healthy ingredients and interesting combinations and recipes. Moreover, they’re open 24-hours a day – 365 days a year.

We found the ambience inside the restaurant to be every bit as good as the outside. The place is done in black and white. The darkened atmosphere gives an overall aura of elegance. We especially enjoyed the sets of Turkish lamps that bring color to the room.

It’s also a spacious place. There are two dining areas and a full sized bar. The bar (part of which is visible in the photo above), runs the entire length of the room and features several flat screen televisions that were tuned to sporting events the night we were there.

Another of our surprises was the menu. As the Flashback Diner is open 24/7, it has a wide and varied menu. There are sandwiches & burgers, salads, breakfasts, dinners, kids meals and deserts. We were especially intrigued by their specials and “celebrity” dishes.

The celebrity dishes are named after old-time TV and movie stars such as Bridget Bardot (a french prime rib dip), Mr. Rogers (a classic BLT) and Andy Griffith (a Thanksgiving Sandwich.)

On our initial visit, I came close to getting the “Ollie” named for comedian Oliver Hardy (of Laurel & Hardy fame.) It is a burger marinated in a glorious moist combination of 23 herbs and spices served on a Brioche bun.” However, I demurred and got “The Floridian.” That’s a signature burger topped with Monterey Jack cheese, avocado and a side of Pico de Gallo.

Mrs Funmeister had the Bea Arthur (from The Golden Girls). It was grilled cheese to which she added a lentil soup. We can report great food and generous portions. This is the kind of place that makes us want to come back and try other selections.

Because they have other locations in Hallendale Beach and Davie, we might try them as well.

Did we mention they have desserts? Well they do. And we were tempted right off the bat. No sooner had Mrs. Funmeister opened the front door than we were greeted by a bakery case. To be honest, we had not seen bigger cakes since we visited The Bubble Room on our visit to Sanibel.

We actually first spotted the Flashback Diner while driving around Boca Raton. We later decided to try it on the strength of TripAdvisor reviews. The restaurant totally surprised us in it’s layout, the menu and the service. The pricepoint was not bad and our waitress Theresa was wonderful.

Our recommendation on the Flashback Diner Boca Raton is one of the easiest we’ve done.