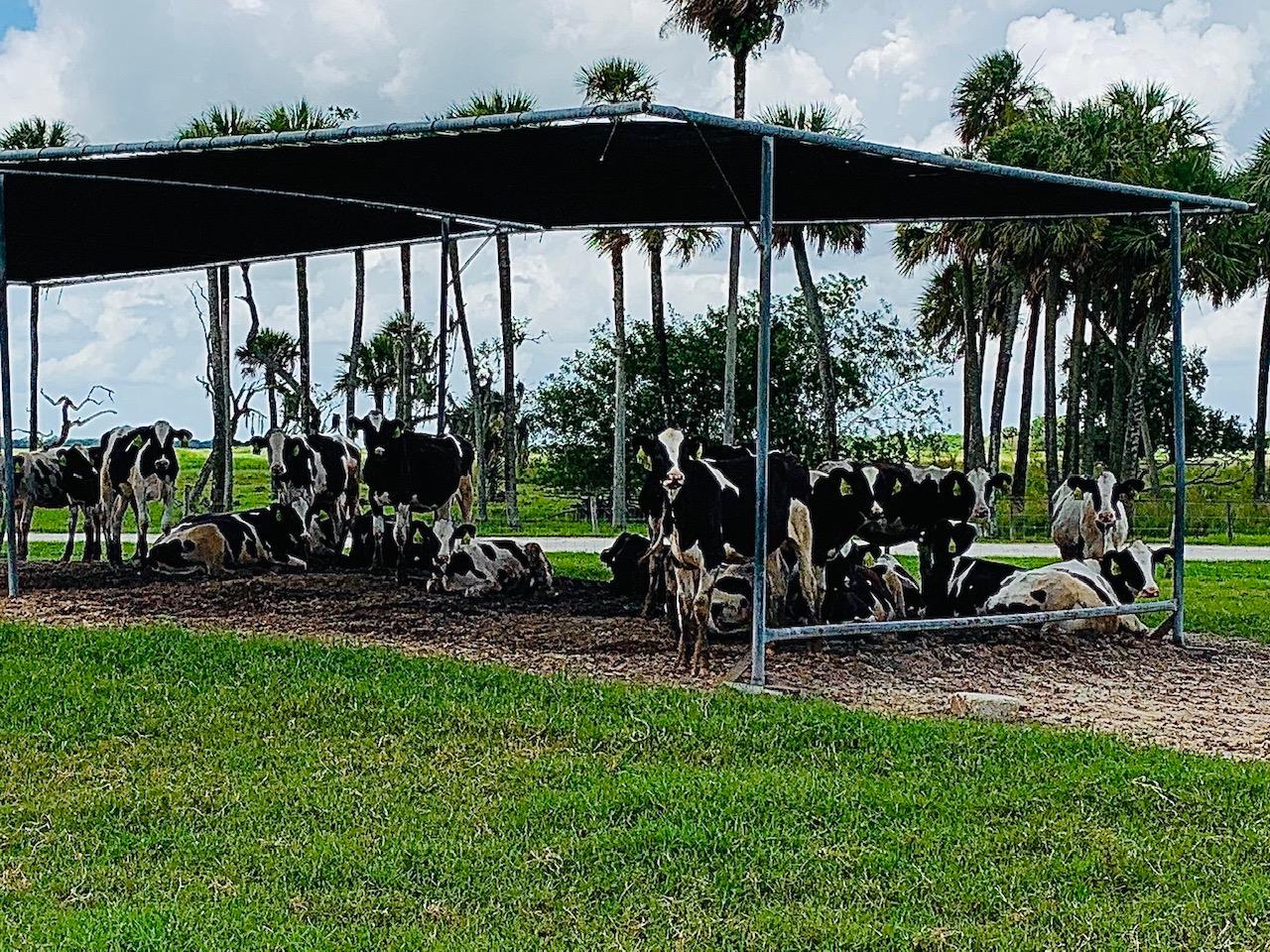 So we heard about ice cream at the Milking R Dairy in Okeechobee. They not only have a varied selection of flavors, they have a wonderful layout. It can be a great experience for young and old alike. Those who follow us know we like the fun and funky. Besides, July is Ice Cream Month, so we thought we’d give them a try.

Our first challenge was finding the place. It is located on Highway 98 just west of the city of Okeechobee. We didn’t see any large signs announcing the Milking R, but apparently they don’t need one. When we arrived it looked as though people already knew exactly where to go.

We thank the Lord for our GPS, which brought us to the driveway at 5818 US 98 without a hitch. But after turning in, it was still a bit of a drive to the ice cream site. There were cows to the left of us and cows to the right as we motored in through the rich green pastureland. Along the way we noted small signs telling us we were headed in the right direction.

Finally, my eagle-eyed wife spotted the banner and we found a place to park. We then made our way toward the long, low white building that apparently serves as an impromptu dining area and gift shop.

When we saw the two ladies with ice cream, we figured we were in the right place.

Getting our Ice Cream

Walking around back, we found the ice cream location. It’s set up in what basically is a food wagon, parked under the roof. We dutifully got in line.

As we waited, we had plenty of time to look at the small A-frame chalk board to decide what flavors we wanted. However, our options were dwindling. We could see there were a number of flavors that already had been erased. Even as we stood there, a young lady came by, cloth in hand, and scrubbed out a couple more options.

The Milking R Dairy is family owned and operated. They make their product in small batches, which run from 30-35 pints at a time. Let us give you fair warning, this high-fat ice cream using natural and locally produced ingredients can be highly addictive.

The flavors include – but are not limited to – 50 Shades of Chocolate, Pucker Up Buttercup, Mango Me Crazy, Fizzle Tracks and Nutty Milkmaid (to name a few). Despite these very attractive offerings, I had decided to go to my default Vanilla while my wife would get her regular Butter Pecan.

“We’re out of Vanilla,” the girl at the counter told me. I was devastated.

“Do you have a flavor for which you are known?” I asked.

“That would be our Banana Puddin’,” she replied.

So that was my order and it would be one of the best decisions of the day.

There are no cones at the Milking R Dairy. Everything comes in plain white pint containers emblazoned with a simple label on top. We have decided this is some of the greatest ice cream on the face of the earth and we will be back.

We said this was an experience – and it is just that. Everything is stylized country. Off to the side of the serving trailer is a small sink so we could wash our hands. There are step-ups for the youngsters and it’s all decorated with a fun farm theme. That includes small pig baskets where we could put our used paper towels.

We mentioned that this was a great place to bring kids. Let me tell you that the attraction is more than just the ice cream. Just off to the side of the serving area we spotted a playground for the youngsters.

Owner Sutton Rucks told us that the Milking R Dairy has hosted many classes of school children. The idea was to let them know where their food comes from in an entertaining way.

We counted more than a half dozen stations where children of all ages could have fun. My favorite was the antique milk truck. It was flanked by a couple of benches where I could sit an watch the activities while the youngsters rammed about.

There were a couple of sand piles. One was a large area where youngsters move the sand about using hand-operated shovels and buckets. I was fascinated with a multi-level sandbox. It was made out of giant stacked tractor tires where the youngsters could climb as they played.

In addition to the sandbox, we saw “tire swings,” made from similar tires and hung horizontally from a cross-beam.

I thought one of the neatest things was a section of corrugated pipe that could be rolled down a set of rails between two giant hay stacks.

There also was an opportunity for the kids to pump their own water. There were plenty of hand pumps so there wouldn’t be much time to wait your turn.

As I walked the playground snapping pictures of the activity stations, I noticed that I was being watched. After a bit, I wondered who was watching whom.

We would be remiss if we didn’t mention the wonderful family who has put this whole operation together. It is owned and operated by Sutton Rucks and his wife Kris. We actually had a chance to talk with Sutton who gave us a brief history of the place.

His adult daughters also are hands-on. I believe it was Lindsay who waited us and Garrett who is credited with the recipe for the Banana Puddin’ ice cream that I wolfed down. Sutton’s sister Julie also helps out with her culinary expertise as well.

This is a great trip and Okeechobee has a lot to offer. In fact, we paired it up with another stop at the Center Mass Shooting Range – which we will be blogging about here very soon.